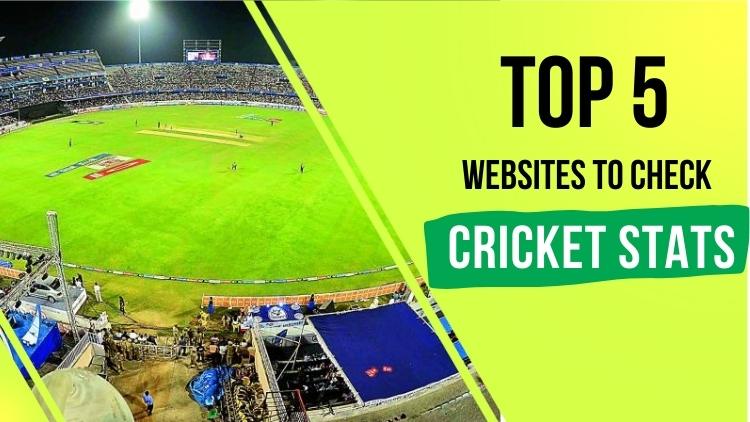 If you clicked on this blog, then it is likely that you love cricket. Cricket is one of the few sports which generates a lot of stats. Being a cricket lover myself, I find it very interesting to look at the cricket stats of different players and teams. It helps me compare players and their performances over certain periods of time. Stats are probably the most accurate depiction of the ability and performance of a player. Let’s look at a few amazing websites from where you can access Stats of Cricket.

ESPN Cricinfo Statsguru is a database originally created by Travis Basevi. It contains statistics on players, officials, teams, information about cricket boards, details of future tournaments, individual teams, and records. Cricinfo Statsguru is one of the most used stat engines in cricket analysis. It has a very well-curated stat engine using which users can apply many filters on the data. Unlike many other websites, Cricinfo Statsguru also provides stats for First Class Cricket across all test playing nations.

HowSTAT specializes in the collection, analysis and presentation of meaningful and interesting records and statistics for all forms of international cricket. The HowSTAT website was created by a group of friends who needed an efficient resource to store and access cricket data. The website was officially launched in December 2000. HowSTAT provides a comprehensive collection of cricket records, statistics and graphs relating to every facet of international cricket in all forms – Test Cricket, ODIs, T20Is, as well as the IPL.

Currently, Cricbuzz is one of the most popular websites for checking live cricket scores. Cricbuzz also has a stats column that predominantly stores statistics of players and their records in Tests, ODIs, T20Is and IPL. Cricbuzz is owned by Time Internet. It also features news, articles and videos about Cricket. Cricbuzz was created by Pankaj Chhaparwal, Piyush Agrawal and Pravin Hegde in November 2004.

Cricmetric is a very popular stat engine that is widely used by many statisticians. It consists of a very user-friendly interface. Cricmetric also consists of many interesting features like batsman vs bowler matchup, player comparison, player matrix, etc. This website also has a prediction system that it uses to predict the outcome of live matches depending on the game situation. Cricmetric was founded by Shashi Mittal.

Last but not the least, CricketArchive is a stat engine that enables users to chart a player’s career from a junior to an international. The website provides access to 700,000 scorecards on 14,000 grounds and details of more than 1.2m players. CricketArchive also stores stats about Major Women’s and Under-19 matches along with friendly and junior level matches. CricketArchive is the only website on this list that is a paid website. Users have to first buy a subscription to be able to view the stats.