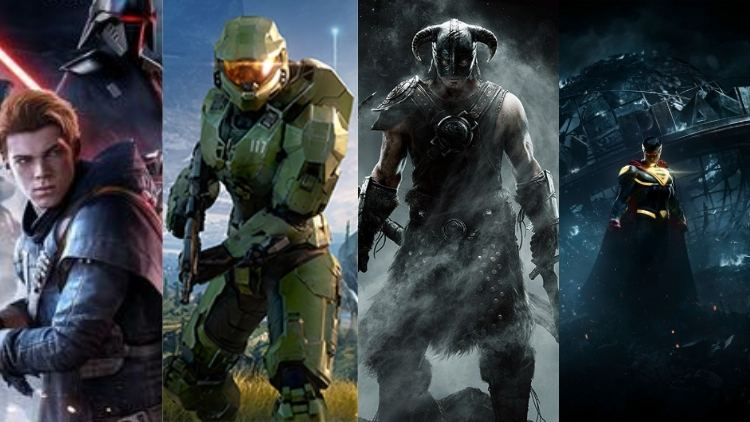 Buying every game at a time is sure expensive. And if you don’t like the game and then refunding it is a hassle for sure. Therefore, Microsoft has brought the Xbox Game Pass subscription system. With 100+ titles from the best developers, it is worth the money.

Along with Game Pass, players also get access to EA Play and can play several famous EA titles. In short, there is a lot to choose from. To help you with that, here are the Best 15 Xbox Game Pass Game You Must Play.

Of course, Skyrim makes it to the list. A masterpiece from the last decade but fun even today. Character creation, immersive open-world, mind-blowing combat system, and cross platform. It’s all there.

Killing Nazis everywhere and going completely crazy while doing so. Sums up the entire Wolfenstein series perfectly. But the second installment from 2017 really gives a feel of a decade. With an outstanding array of characters to present from. Well-written characters and use of them, Wolfenstein II: The New Colossus made it to the list.

“In the battlefields of the frontier, the pilot is the true dominant force”.

Developed by Respawn Entertainment, Titanfall 2 is a must-play shooter from 2016. Either play in the 6-hour single player campaign or go all out in multiplayer. Become a pilot and take your Titan to the cruelest of the battlefields frontier lands has ever seen. Prequel to the famous Battle Royale Apex Legends. Titanfall 2 is game you must play if you get or plan to get Xbox Game Pass.

With a rocky start, Battlefront 2 has improved a lot since its launch in 2017. The game suffered a lot because of its Micro Transactions. But now they are all gone and remain only for cosmetics and skins. The game itself is fun to play in both single-player campaign and multiplayer. Single player story is a direct sequel to Star Wars Episode 6: Return of the Jedi. And multiplayer covering multiple timelines. Players can fight in the deserts of Geonosis to the lush green of Kashyyyk or the glaciers of Hoth.

Developed by NetherRealm Studios, Injustice 2 is by far the best DC fighting game. A sequel to Injustice where Superman becomes a villain. This game features a new threat to Earth. In form of Braniac. Now Superman and Batman must set aside their differences and save the Earth together. The game offers players a bunch of DC superheroes and villains to choose from.

An action-adventure stealth game set during the Hundred War period. Two siblings Amicia and Hugo must survive the Europe’s deadliest catastrophe, The Black Plague. The tale follows the siblings as they flee from the French inquisition. The duo is forced to travel through warring lands, plagued lands, and ruins of old. A Plague Tale has the most heart wrenching story in this list. A sequel to the game is set to release in 2022.

The best way to describe Scarlet Nexus would be to call it a Christopher Nolan game. It might not be as confusing as Nolan’s movies. But it sure appeals to it. Scarlet Nexus is an anime-style action role-playing game by Bandai Namco Studios. The game can be played as Yuito Sumeragi or Kasane Randall. The choice of the character effects the perspective of the game. The players are supposed to fight the creatures called, Others. While the darker forces have already prepared to move.

This 2019 action-adventure game is a must play for its stunning visuals. The game which takes place inside the headquarters of Federal Bureau of Control (FBC). Playing in third-person perspective, the players must play and uncover the secrets of the bureau. While tackling the AWEs (Altered World Events) around them.

Join the androids 2B and her companion 9S as they fight hordes of alien machines who have captured Earth from humans. Nier: Automata is an action adventure with a bit of an arcade taste to it. The game requires multiple playthroughs to unlock all the aspect of the game. It has some of the most beautiful environments to ever exist in game. The story is enjoyable and engaging enough to get you hooked to the game.

Following the story of 2 fugitives on a quest for revenge. A Way Out is a 2-player co-op game. With tons of puzzles, action, and adventure. The game is played using split screen even when online. The players can see each other and co-ordinate accordingly. Developed by Hazelight studios, this is a game you must play with your friend. Is your friend does not own the game or xbox pass, the two can still play together. Using the friend’s pass, which requires only one person to own the game.

Set during the Second World War, this game takes on the adventure and horrors of our past. We get to see the wars up close in both single and multiplayer mode. Single player mode has several war stories, while multiplayer has different environments and game modes to choose from. The game offers king of the hill to Battle Royale, and almost everything you can expect in a first-person shooter.

After Force Unleashed, Fallen Order is the first linear Star Wars game. The story follows Cal Kestis, a survivor of Order 66, the Jedi Purge. As he struggles to keep his identity as a Jedi hidden and Inquisitors hunting the galaxy for the last remaining Jedis. Cal must make toughest of decisions alongside his new crew. But he soon realizes, what lies in his shoulder is much more than he thought of it.

Similar to A Way Out, It Takes Two is a 2-player co-op game. But this time, the players play as a married couple having relationship problems. The couple soon finds themselves in a magic world. Now must go on an adventure to return to their normal lives. Developed by Hazelight Studios, It Takes Two is much deserved for its Game of the Year Award, it won in Game Awards 2021.

Return to play as Master Chief in the campaign of Halo: Infinite. Master Chief’s story has not yet ended. Now, with Cortana gone, Master Chief must partner with a new AI system and learn the secrets of the Ring. The multiplayer version of the game is free to play. But the single player campaign either needs to be bought or can be played using Xbox Game Pass.

Horizon Festival is Back. And this time in Mexico. Unleash your inner speed in the fast-moving racetrack of Forza Horizon 5. Forza Horizon 5 is by far one of the best racing games to ever exist. With more than 200+ cars to collect from. And race them on Road or Dirt. The stunning graphics and realistic physics are all the cherry on top. If you have Xbox Game pass or plan to get it, you need to play Forza Horizon 5.