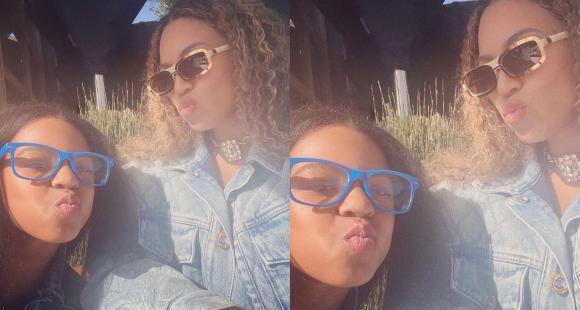 Taking to Instagram, Beyonce dropped her chic looks and also posed for the camera with daughter Blue Ivy. Check out all the photos below.

Beyonce”s family day out! While the iconic singer’s social media presence is usually all about high fashion, she sometimes does take the road less travelled. In this case, Beyonce shared some precious photos from her quality family time that she recently shared with her children. For the unversed, the 39-year-old singer is a doting mum to daughter Ivy and twins Rumi and Sir.

Taking to Instagram, Beyonce dropped her chic looks and also posed for the camera with daughter Blue Ivy. The singer and her daughter adorable pouted for the camera in a sunkissed photo. Blue Ivy was seen wearing cool blue glasses and Beyonce’s choker, sunglasses and denim jacket as usual looked super stylish.

On their day out, the family also stopped for a quick meal at their favourite restaurant Nobu in Malibu. In a series of photos, Beyonce also shared an adorable photo of Rumi in a cute little dress on the beach. Whereas, son Sir can be seen enjoying the sand and water with his mum.

In March 2021, Beyonce created history at the Grammys as she became the most awarded artist in Grammys history. At the awards, Beyonce took home the Grammy for Best R&B Performance for Black Parade, Best Music Video for Brown Skin Girl and Best Rap Song and Best Rap Performance for Savage (Remix), which was in collaboration with Megan Thee Stallion.

ALSO READ: Taylor Swift had the ‘Best Friday Ever’ after Beyonce sent her a note on their historic Grammy wins