Home EntertainmentBollywood Bhavana Pandey: When I met Chunky and got married to him, he was at the lowest phase of his career

Bhavana Pandey: When I met Chunky and got married to him, he was at the lowest phase of his career 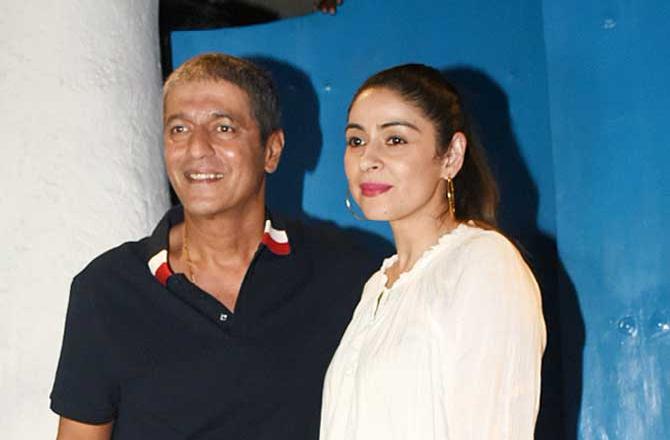 Fabulous Lives of Bollywood Wives recently streamed on Netflix and it showed the inside life of a Bollywood actor’s wife, as the title suggests. It stars Neelam Kothari, Seema Khan, Bhavana Pandey, and Maheep Kapoor. And the four ladies have given a couple of interviews to promote it.

In an interview with Bollywood Hungama, when they came to talk about their show, Bhavana, Chunky Panday’s wife, spoke about her husband, how he was at the lowest phase of his career when they tied the knot, and how he stopped doing Bollywood films.

She revealed, “When I met Chunky and got married to him, he was at the lowest phase of his career. We met in 1996 and got married in 1998. That is the time he left for Bangladesh. He stopped doing Bollywood films because he wasn’t getting work. Imagine, I am dating a man who is so positive.”

She added, “That is the reason I married him, because those two years, even though he was going through his lowest, I never felt that. He was always laughing, joking, being a really nice person. He never let me feel it even when we were dating. And then, when we got married, he continued the same thing.”

The Housefull actor also featured in one of the episodes and talked about how his attendance at the Filmfare Awards would have cost his daughter Ananya Panday the Black Lady for the Best Debut. He said, “I feel I am jinxed when it comes to awards. If I go to an awards function, maybe we may not win the award. She will not win it… I’ve never won an award.”

Coming back to Bhavna Pandey, she married actor Chunky Panday in January 1998. The couple has two daughters, Ananya Panday and Rysa Panday. Ananya made her Bollywood debut in 2019, with Karan Johar’s Student Of The Year 2, which also starred Tiger Shroff and Tara Sutaria. Ananya also had Pati Patni Aur Woh is the same year. She was last seen in Ishaan Khatter-starrer Khaali Peeli. Ananya will be next seen in Vijay Deverakonda’s next, which is a bilingual film. She also has Shakun Batra’s yet-untiled film alongside Deepika Padukone and Siddhant Chaturvedi.