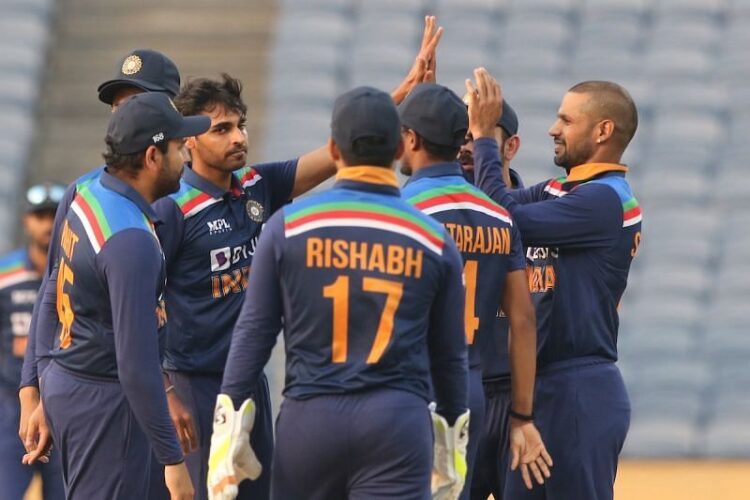 Seasoned Team India pacer Bhuvneshwar Kumar has said that the bowlers had prepared hard for the challenge of taking on a dominating England batting lineup.

India defeated England 2-1 in the three-match ODI series despite the visitors possessing a number of dangerous hitters with the bat. While Jonny Bairstow (124) and Ben Stokes (99) whacked Indian bowlers in the second ODI, Sam Curran (95 not out) nearly snatched away the third game on Sunday.

Speaking at a virtual press conference after India’s thrilling seven-run triumph, Bhuvneshwar Kumar asserted that the bowlers were very much aware of what they were going to be up against. He said in this regard:

“Mental toughness matters a lot. Before the start of the series, as a team we had discussed that England plays aggressive cricket. So it can either be a high-scoring affair or their players can get out early. So we knew the kind of challenge we were going to be up against. We were prepared to deal with the situations. We always maintained our self-belief throughout.”

After losing the toss and sent into bat, India posted a challenging 329 on the board. Wicketkeeper-batsman Rishabh Pant top-scored with 78, while Shikhar Dhawan (67) and Hardik Pandya (64) also made significant contributions.

In their chase, England crumbled to 200 for 7 before Curran’s brilliance raised hopes for his team. In the end, though, the efforts of Shardul Thakur (4 for 67) and Bhuvneshwar Kumar (3 for 42) trumped Curran’s resilience.

Very difficult to bowl against a team like England: Bhuvneshwar Kumar

Despite winning the T20I and ODI series, Bhuvneshwar Kumar admitted that bowling to the explosive England batsmen is a huge task. According to the 31-year-old, England’s batsmen are capable of scoring off both good and bad balls.

“As bowlers, we are aware that the England batsmen will give us opportunities because of the kind of cricket they play. But you have to created those chances by bowling really well. The entire England team plays attacking cricket with the bat. However, it is not as if they play rash strokes. They can score off bad balls and good ones as well. It is very difficult to bowl against a team like that. But as a bowling unit, we had preempted these situations. So we were prepared for it,” the medium-pacer explained.

Natarajan gives away just six runs in the final over, giving his team a seven-run victory.

Bhuvneshwar Kumar made a successful comeback to the Indian team in the T20I series against the visitors after a long injury lay-off.

He was named the Man of the Match for his brilliant performance of 2 for 15 in the deciding T20I in Ahmedabad.