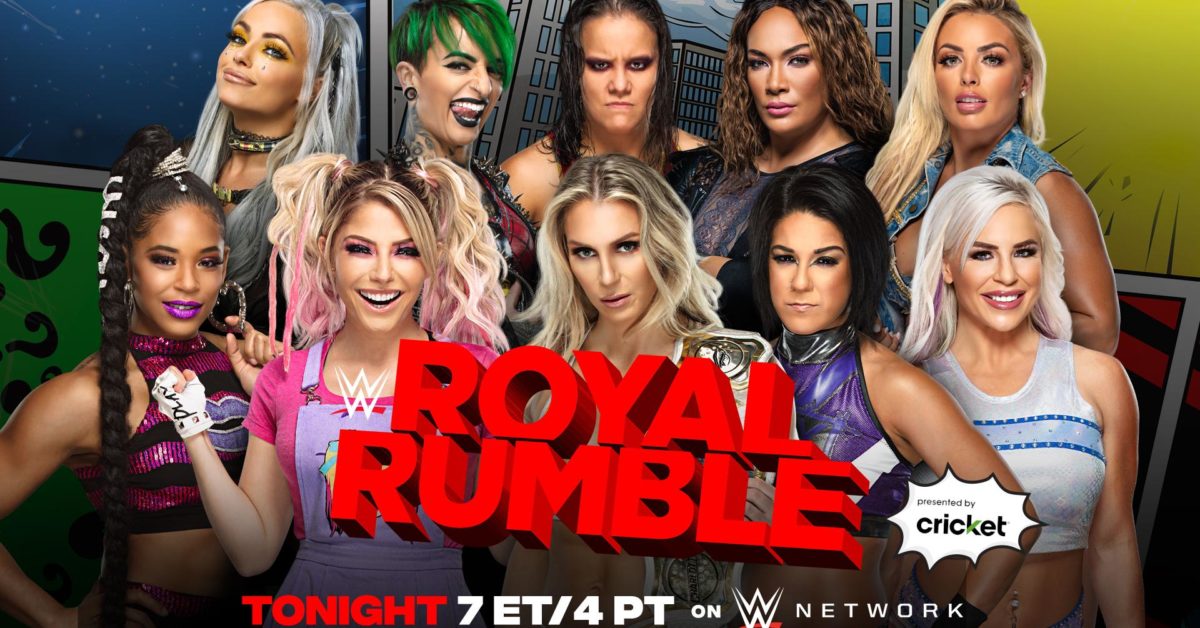 I am back, comrades! Your El Presidente has returned for more live Royal Rumble PPV coverage. Chad McMahon was originally scheduled to cover this PPV along with Chelsy, but no one has seen or heard from him since the Wednesday cable ratings came out last Thursday. It seems that his wife has been cheating on him with a man called Gary. I’m not sure if that’s why he disappeared or if it was because of the ratings. Haw haw haw haw!

Big E talks with Xavier Woods about losing to Retribution all the time. But Big E gives him a pep talk about the Royal Rumble. Sami Zayn arrives and complains about the conspiracy against him. Mid-rant, he’s interrupted by Kofi Kingston. Zayn leaves, and Kingston explains he’s still not medically cleared to compete, but he’s here to support his friends. And if that’s not enough to warm your heart, he’s got Brodie Lee on his ring gear.

Then my favorite recording artist, Bad Bunny, performs his song Booker T with the actual Booker T on the stage. And then, it’s time for the Women’s Royal Rumble match. Inadvisably, Jerry “The King” Lawler is on commentary for this one, comrades.

Bayley comes out first, and then it’s Naomi! She’s got a new look, no green, peach tights. Are they finally going to give Naomi a chance, comrades?! They fight for a while, and then Bianca Belair comes out third. Billie Kay is out next, but instead of getting in the ring, she gets on commentary, which is honestly the best outcome for everyone involved.

Shotzi Blackheart is number five, comrades! She drives down to the ring in her tank, which is, coincidentally, also how El Presidente likes to travel. But she misses when she fires the tank’s gun at Billie Kay as Kay tries to present her resume in hopes of a team-up. El Presidente never misses. Shayna Baszler is out next. Billie Kay tries to offer her resume, but Baszler assaults her instead.

Toni Storm is out at number seven, and she ignores Kay’s offer. Baszler is the first to get an elimination in the women’s Royal Rumble, tossing Blackheart out of the ring. Jillian Hall comes out at number eight. She is very much into Billie’s offer of a team-up, so they both get in the ring together and, to their credit, find some success. Ruby Riott is out at number nine. Billie and Jillian form an alliance with Riott as well.

Victoria is out next! Victoria beats up everyone before getting into a holding pattern with Naomi. Peyton Royce is out next. Not even the announcers recognize her music at first. That’s what happens when you change Iconic theme songs, comrades! Haw haw haw haw!

Speaking of the Iiconics, Peyton and Billie are reunited, and it appears to make Ruby a little jealous. Santana Garrett is out next, which just disappoints everyone because they were all expecting “Santina” Marella when they first saw her Titantron graphic. Liv Morgan is unlucky number thirteen, and boy does it suck to be Shotzi Blackheart, amigos, the only person eliminated in the entire match so far.

Torrie Wilson is number seventeen. Ripley eliminates Dana Brooke in a brutal fashion, powerbombing her over the ropes onto the ring apron. Er… according to the music, Ric Flair is number eighteen? Oh, he’s just out to introduce Lacey Evans, who wears one of his robes to the ring. Charlotte eliminates Peyton Royce. Baszler eliminates Torrie Wilson. Belair eliminates Bayley, who throws a tantrum.

Mickie James comes out at number nineteen, and commentary again pretends she isn’t under contract as an active wrestler. Have they been brainwashed by the secret police, comrades? Nikki Cross is out next. Alicia Fox is number twenty-one. And then… R-Truth? It turns out he’s here for the wrong Royal Rumble. But when the jobbers follow in pursuit of his title, he teams up with Alicia in the ring to fend them off… only for her to roll him up and win the title.

Tamina is out at number twenty-five. Ripley eliminates Carmella and beckons Tamina into the ring, where they brawl. Naomi gets tossed out but lands on her back, keeping her feet off the ground. Belair nearly follows, and Naomi uses her hair to climb halfway back in the ring. Belair isn’t happy with this but realizes they can both get back in the ring if they work together, so they do.

Lana is out at number twenty-six. Alexa Bliss is twenty-seven. The Fiend lighting cues start-up, but Ripley dumps Alexa. Ember Moon is twenty-eight. Nia Jax is twenty-nine. Baszler eliminates Evans. Jax eliminates Moon. Jax and Baszler team up to eliminate Naomi. They eliminate Tamina, but then they turn on each other. Jax eliminates Baszler.

Lana jumps on Nia’s back, but Nia shoves her off. Lana flees the ring, and Jax chases her. Lana gets back in, and Jax follows. Lana slaps her repeatedly in the face. Jax, enraged, charges, but Lana ducks, and Nia tumbles out. Natalya is out at number thirty, and Nia and Shayna assault Natalya before she makes it to the ring. Then they climb in the ring and wreck everyone. Then they toss Natalya in the ring and leave.

Natalya and Lana hug, but when Lana turns her back, Natalya attacks and eliminates Lana. Belair eliminates Natalya. Ripley, Belair, and Charlotte are the final three. Flair looks confident she can win this… but Ripley and Belair eliminate Charlotte. Ripley tries to take out Belair, and they nearly both fall out but agree to calmly get back in the ring and fight it out. They do, and Belair ends up clotheslining Ripley out of the ring.

Congratulations to Bianca Belair, who, in addition to winning, broke the record for the longest time in a Women’s Royal Rumble match. Kayla Braxton interviews Belair after the match. Belair is in tears and barely get her words out, but she’s going to WrestleMania, and that’s all that matters, comrades! Fireworks agree.

And now, El Presidente must once again bid you farewell as Chelsy Bloomfield will take over for the next match. Until I see you again: socialism or death!