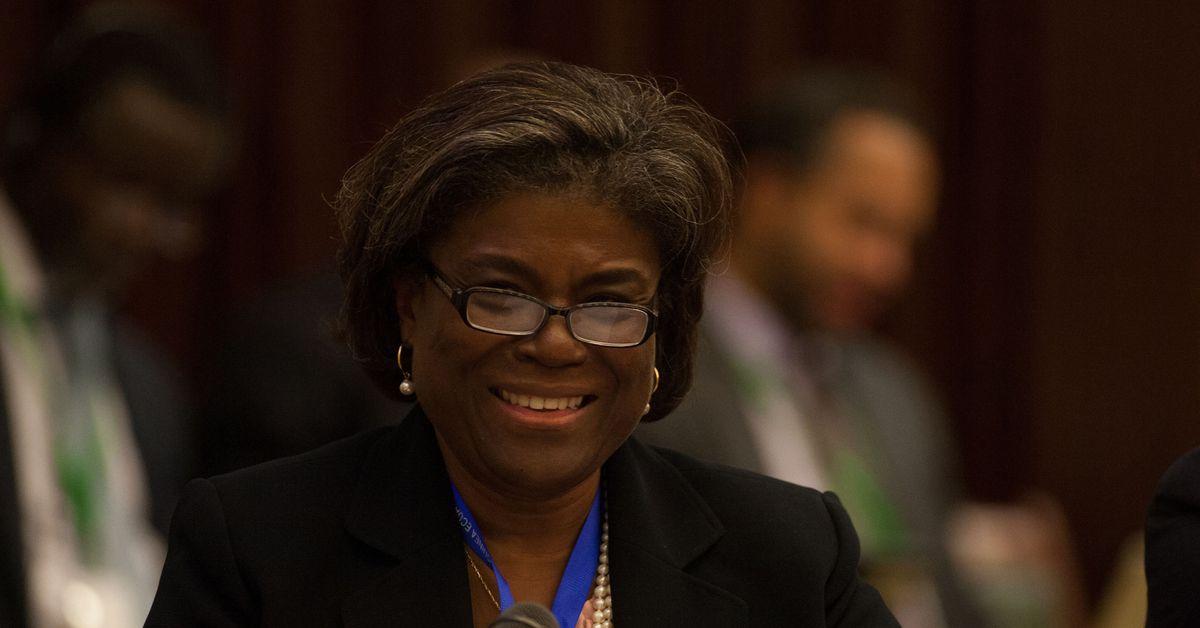 President-elect Joe Biden is nominating diplomat Linda Thomas-Greenfield as US ambassador to the United Nations, as his administration begins its project to restore American global leadership.

Thomas-Greenfield had a decades-long career in the US foreign service, serving as the US ambassador to Liberia and later as the US Assistant Secretary of State for African Affairs during the second term of Barack Obama’s administration. At the start of the Trump administration, President Donald Trump’s new leadership at the State Department tried to push her out, part of a larger purge of career foreign service officials. Thomas-Greenfield retired in September 2017. She led the Africa Practice at Albright Stonebridge Group, a firm headed by former Secretary of State Madeline Albright.

“We have no time to lose when it comes to our national security and foreign policy,” President-elect Joe Biden said in a statement announcing key members of his foreign policy and national security team on Monday. “I need a team ready on Day One to help me reclaim America’s seat at the head of the table, rally the world to meet the biggest challenges we face, and advance our security, prosperity, and values. This is the crux of that team.”

Thomas-Greenfield must still face Senate confirmation, but tapping a veteran like her to represent the United States at the UN signals that the incoming Biden administration is relying on veteran leadership to help repair some of America’s strained diplomatic ties. Thomas-Greenfield had also recently co-authored an op-ed in Foreign Affairs on how to restore the State Department, including rehabilitating the foreign service ranks, which were depleted under Trump.

In that op-ed, Thomas-Greenfield and fellow diplomat William J. Burns, called the lack of diversity within America’s diplomatic corps “a national security crisis.” The nomination of Thomas-Greenfield, a Black woman, looks to be a step toward that goal, and of the Biden-Harris administration’s commitment to a Cabinet that looks like America.

Trump turned the UN-US relationship even rockier. Biden looks to bring back some stability.

Some US presidents have had better relationships with the United Nations than others. But Trump’s was particularly strained, especially as he pulled out of multilateral agreements like the Paris Climate Accords, and later, the UN’s premier health agency, the World Health Organization. Oh, and all those “America First” speeches at the UN General Assembly didn’t help.

Still, Trump’s first UN ambassador, former South Carolina Gov. Nikki Haley, managed to strike a balance between Trump’s “America First” worldview and a more traditional Republican foreign policy, and found places to work constructively at the United Nations, including on UN reform. But Haley was replaced by Kelly Craft, the former US ambassador to Canada and a big GOP donor, who had scant foreign policy experience. The UN ambassadorship, which was a Cabinet position during Haley’s tenure, hasn’t remained so during Craft’s time at the UN.

Biden is again elevating the UN ambassadorship to a Cabinet rank, the transition confirmed in their announcement about Thomas-Greenfield’s nomination. It’s a sign of a recommitment to multilateral institutions.

Thomas-Greenfield’s nomination also reflects Biden’s rhetoric on the importance of recommitting to US alliances and partners. Thomas-Greenfield has deep diplomatic experience, someone who’ll come into the job understanding the give and take required in a bureaucratic body like the United Nations, and what the US needs to do to start rebuilding trust within multilateral institutions.

And the challenges the next US ambassador to the UN will face are enormous. The United Nations just marked its 75th anniversary this year, meeting remotely because of the Covid-19 pandemic. The UN has struggled at times to meet this unprecedented moment of a global pandemic and economic crises, both of which have stalled (and even in some cases reversed) progress on poverty and hunger and inequality. A climate catastrophe still looms, as do conflicts in places like Yemen, Syria, and now Ethiopia.

Beyond that, China has taken advantage of the vacuum in US leadership at the United Nations during Trump’s tenure, something an incoming Biden administration will now have to navigate as it begins its global rehabilitation project.

A Biden administration means that the US is more likely to become a reliable partner on issues like climate change and global health. That brings some stability back to the United Nations — though normalcy is probably still a long way off.

An informed electorate is essential to a functioning democracy. Vox aims to provide clear, concise information that helps people understand the the issues and policy that affects their lives — and it’s never been more vital than today. But our distinctive explanatory journalism is expensive. Support from our readers helps us keep our work free for everyone. If you have already made a financial contribution to Vox, thank you. If not, please consider making a contribution today from as little as $3.