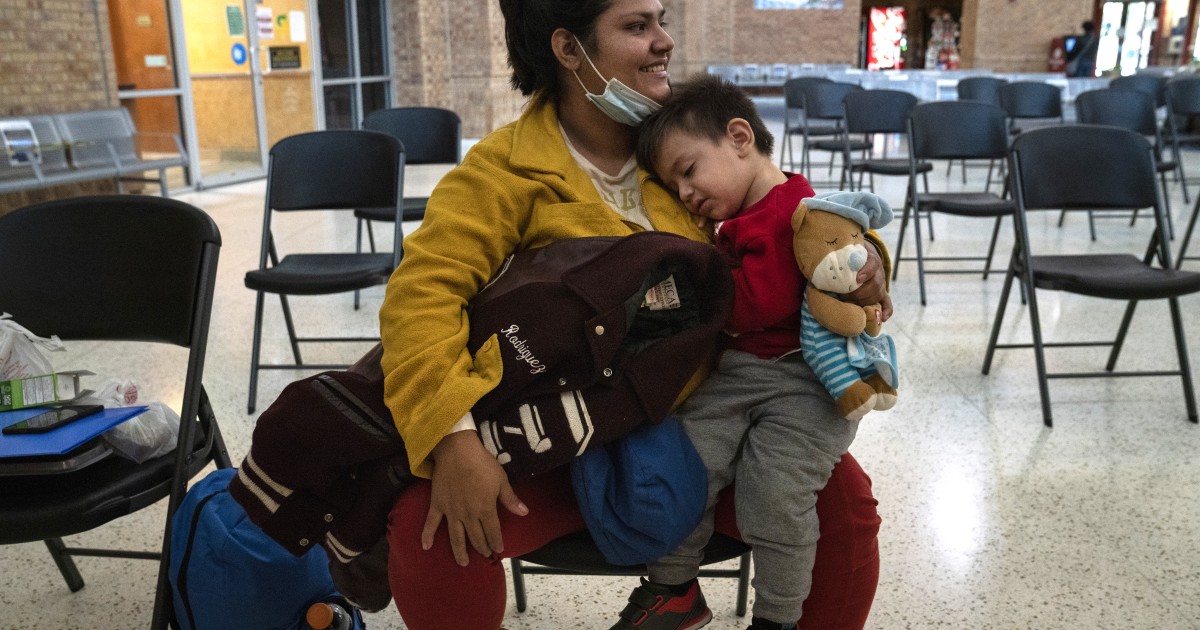 Days after crossing the Rio Grande on a smuggler’s raft, Salvadoran migrant Karla Rivera Hernandez cradled her toddler Mateo on Thursday at a bus station on the Texas border as they prepared to travel to join a cousin in New York.

Rivera, 24, a single mother working as a cook, left for the border last month hoping President Biden’s new immigration policies would allow her to stay in the U.S.

“That gave us the opportunity to come — he is a good man,” she said as she sat with half a dozen other migrants who had been released that morning by U.S. Customs and Border Protection with instructions to contact immigration courts at their destinations as their asylum cases progress.

But due to swiftly evolving and at times contradictory new U.S. immigration policies, hundreds of migrant families, many from Central America, still languished in a tent camp across the river in Matamoros, Mexico, after claiming asylum in the U.S. but being forced to wait south of the border by President Trump’s “Remain in Mexico” policy.

Ana Antunez , 27, fled Honduras a year ago with her two youngest children after they witnessed a neighbor try to rape her. She had hoped to join her husband, a construction worker, and 10-year-old daughter in New Orleans, who left after children at her school were kidnapped. The two have pending asylum claims.

Instead, Antunez and her sons, ages 6 and 4, who also claimed asylum, were forced to remain at the camp in Mexico while their case progressed. In October, with their court dates postponed due to the COVID-19 pandemic, her sons were allowed to cross the border to stay with their father. But Antunez remained at the camp this week, sleeping alone in her tent.

“I also want to cross. I have my kids there. But I’m scared they will deport me to my country,” she said Thursday as she sought shelter from a cold rain in one of the camp’s open-air kitchens.

As Biden begins reversing Trump’s asylum policies, some new arrivals who crossed the border illegally have benefited from the administration’s largesse, while those who have resisted will have to wait at least another week — maybe longer — to enter legally. Asylum seekers from Africa, the Caribbean, Central America and South America were waiting this week for a chance to enter the U.S. to await the outcome of their immigration cases, advocates said.

Biden officials said migrants for now are allowed to enter the U.S. only under very limited circumstances.

“The U.S. government is committed to rebuilding a safe, orderly and humane immigration system,” Secretary of Homeland Security Alejandro N. Mayorkas said in a statement Friday. “Especially at the border, however, where capacity constraints remain serious, changes will take time. Individuals who are not eligible under this initial phase should wait for further instructions and not travel to the border. Due to the current pandemic, restrictions at the border remain in place and will be enforced.”

But despite what Biden administration officials have said, during the past two weeks, the U.S. Border Patrol has released scores of migrant parents like Rivera caught crossing the southeastern Texas border, for years the busiest stretch for migrant crossings. That’s because the adjacent Mexican state of Tamaulipas has refused to allow them to be returned, said Sister Norma Pimentel, executive director of Catholic Charities of the Rio Grande Valley. Border Patrol has released about 150 migrants daily to the Catholic Charities respite center in McAllen, Texas, she said, where they’re tested for the coronavirus and released or sent to a hotel to quarantine.

Another 50 migrants have been released most days at the bus station to the east in Brownsville, Texas, where they’re tested for the virus by city staff and, if positive, asked to quarantine. Volunteers from the nonprofit Team Brownsville provide hotel rooms if migrants must quarantine, but at least four families left last week before completing quarantine, said Andrea Rudnik, who volunteers with the group.

Migrants at the bus station Thursday tested negative before heading to a handful of states — Florida, Colorado, Tennessee, Washington — to pursue their immigration court cases. While they were all seeking asylum, only one couple had fled for political reasons, from Cuba; others said they came from Central America for economic reasons, including better-paying jobs.

“We were waiting for the opportunity to come,” she said, and she had heard rumors “that they would give us permission.”

Before Trump took office, migrants seeking asylum were generally allowed to await their immigration hearings with family or friends in the U.S. In 2018, the Trump administration created the “Remain in Mexico” policy, officially known as the Migrant Protection Protocols, requiring more than 70,000 asylum seekers like Antunez to await court dates south of the border, where advocates have recorded at least 1,134 instances of them being kidnapped, raped or assaulted.

At the start of the pandemic, the Trump administration further closed the southern border to asylum seekers by invoking a public health law known as Title 42. Mexico agreed to allow U.S. authorities to return Guatemalans, Hondurans and Salvadorans who had entered the U.S. from Mexico; the U.S. generally flies other migrants back to their home countries. Biden administration officials have said they plan to maintain Title 42, but in accordance with a recent court ruling, they will exclude migrant children who arrive at the border unaccompanied by an adult.

On Friday, Homeland Security officials announced that they will begin allowing roughly 25,000 migrants with active Remain in Mexico immigration cases to enter the U.S. starting Feb. 19. Migrants will register virtually, and those eligible will receive instructions on where and when to cross the border via ports at El Paso, Brownsville and San Ysidro, Calif. Before they are released in the United States, all migrants will be medically screened in Mexico for the coronavirus and other illnesses by the United Nations Migration Agency.

Once in the U.S., the migrants will be able to await the outcome of their immigration cases with sponsors, usually family members. Officials said they will process about 300 migrants a day, prioritizing the most vulnerable, including those who have been waiting for up to two years in some of the world’s most dangerous cities in northern Mexico. Officials stressed that migrants without active Remain in Mexico court cases won’t be allowed to enter the U.S. yet, although those who were deported or turned back from the border during the pandemic may be considered for admission later.

Immigration lawyer Taylor Levy said she’s receiving calls from migrants heading to the border now because they assume they will be allowed into the U.S., even though many are still being deported. During recent Facebook live discussions, Levy urged migrants with active Remain in Mexico asylum cases to wait to be admitted to the U.S. She said she hopes the Biden administration reconsiders those who lost asylum cases under Trump or were unable to claim asylum during the pandemic.

“They are expelling a lot of people,” she said. “Yes, there are some releases, but it’s just rolling the dice.”

The Matamoros camp has recently grown from 650 to 1,000 people, Pimentel said, including some migrants who may not yet qualify to enter the U.S. under the Biden administration’s rules. But she said the new policy was encouraging, especially the fact that the administration plans to prioritize the most vulnerable migrants.

“The whole Matamoros camp can very well be considered a most vulnerable population because of the circumstances,” she said, and migrants there may be eligible to enter the U.S. while their asylum cases play out. “These families who are freezing in this bitter cold we have today, this news comes as a blanket of warmth, of hope that they will finally have their cases heard.”

Cuban asylum seeker Mileydis Tamayo Salgado, like many at the camp, doesn’t have an attorney. She watched advocates’ Facebook and YouTube videos this week and decided not to cross the river yet because it might jeopardize her court case.

Tamayo, 51, has been at the camp for nearly two years. Trained as a nurse, she has been working at the camp’s nonprofit clinic, Global Response Management. Since last fall, numerous pregnant migrants have arrived at the camp and were allowed into the U.S. Tamayo said she gets frustrated waiting to cross the border, but “I have faith. We just have to wait.”

Texas border officials recently started admitting some migrants from the camp with serious medical conditions documented by clinic staff, said the clinic’s founder, Helen Perry. She’s eager to see migrants from the camp allowed into the U.S., since a drug cartel war has been brewing in the surrounding city, with increased street shootings during the past month in adjacent neighborhoods.

“We would really like a means of getting people to safety before something tragic happens,” Perry said.

Antunez stays near the camp clinic, in a tent pitched on a former basketball court that sometimes floods. She fears that if she leaves the camp, she might be kidnapped. The camp has fences and is guarded by Mexican immigration officials, but she still feels unsafe sleeping alone at night.

Her 4-year-old son Caleb has a birthday Feb. 26 and wants her to arrive in time to celebrate in New Orleans. Her children call her regularly on her cellphone to ask, “When are you coming, Mom?”

Antunez worries the separation will take a toll on them, especially her 6-year-old son Dayher, who would crawl into bed and hug her when he got scared at the camp.

“There are days I cry, I feel desperate, I can’t eat,” Antunez said. “I tell myself I have to have faith. It’s a program. It has to end someday.”