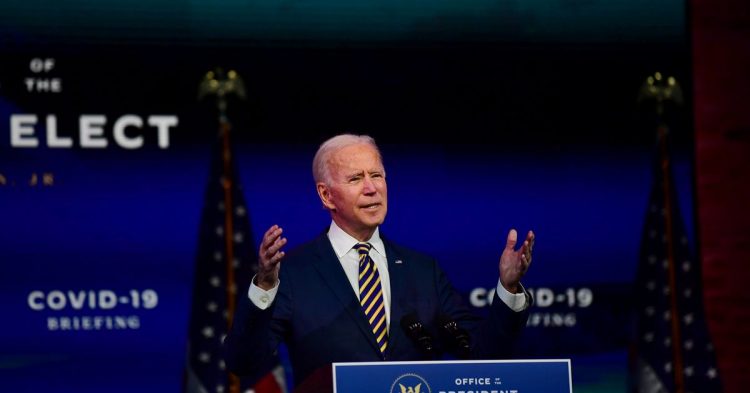 Striking a grim tone in Wilmington, Delaware, President-elect Joe Biden warned that defeating Covid-19 through widespread vaccination will be the “greatest operational challenge we’ve ever faced as a nation.”

Biden says he expects “incredible opportunities for our nation in the years ahead,” declaring that the economy is “poised to come back.” However, to get there, Biden newly pledged to invoke the Defense Production Act (DPA) to accelerate private industry manufacturing of protective equipment and vaccines. The president-elect also promised Congress that he would propose another Covid-19 relief package early next year.

As Vox’s Alex Ward has explained, the DPA, which President Donald Trump has used to provide some medical equipment, would allow the federal government to require that companies fulfill its orders before they complete any other commercial orders.

In early December, Biden announced a goal of 100 million vaccine shots in his first 100 days, but vaccine distribution woes imperil this benchmark. Biden himself threw cold water on this goal in his remarks when he pointed out that the Trump administration’s goal of vaccinating 20 million Americans by the year’s end is extremely unlikely seeing as the United States has only vaccinated “a few million” people so far.

Earlier on Tuesday, Vice President-elect Kamala Harris received her first shot of the Moderna vaccine in Washington, DC, on live TV. Biden received the Pfizer/BioNTech vaccine on December 21, also on live TV as part of his bid to increase confidence in the safety of the inoculation. And Vice President Mike Pence received the Pfizer/BioNTech vaccine a few days earlier.

Along with his goal of mass vaccinations, Biden also recently pledged two other priorities: universal mask-wearing and reopening the majority of schools within his first 100 days. He reiterated the importance of both of these objectives in this speech, noting that Congress needed to allocate funds to schools so that they can reopen.

Today, I’m announcing key COVID-19 priorities for the first 100 days of my administration:

With these steps, we can change the course of the disease and change life in America for the better.

“It’s not small what we’re asking of you, but we’re in this together,” Biden said, acknowledging the difficulty of asking people to continue social distancing and mask-wearing for several more months. Though Biden’s speech was focused on charting a clear course to defeating the virus, in his self-described best-case scenario — where a million Americans a day are receiving the vaccine — the country could be well into 2021 before coming close to herd immunity.

Biden’s remarks come as Covid-19 cases have surged to their highest levels over the holiday season. On December 28, the day before Biden’s address, the United States recorded over 189,000 new cases and almost 1,900 deaths.

Vox’s German Lopez analyzes weekly where each state is on Covid-19 cases, infection rates, and test positivity rates based on data from the New York Times and the Census Bureau. As of his most recent pre-holiday update on December 16, not a single state had “fewer than four daily new coronavirus cases per 100,000 people.” Lopez writes that daily case rates are the “most straightforward way to measure whether any place is experiencing a big coronavirus outbreak.”

While experts have not definitively traced a surge due to Thanksgiving and Christmas gatherings, expectations are that cases and deaths will spike in the coming weeks.