Home News Biden wants to reopen schools. California could hold him back

Biden wants to reopen schools. California could hold him back 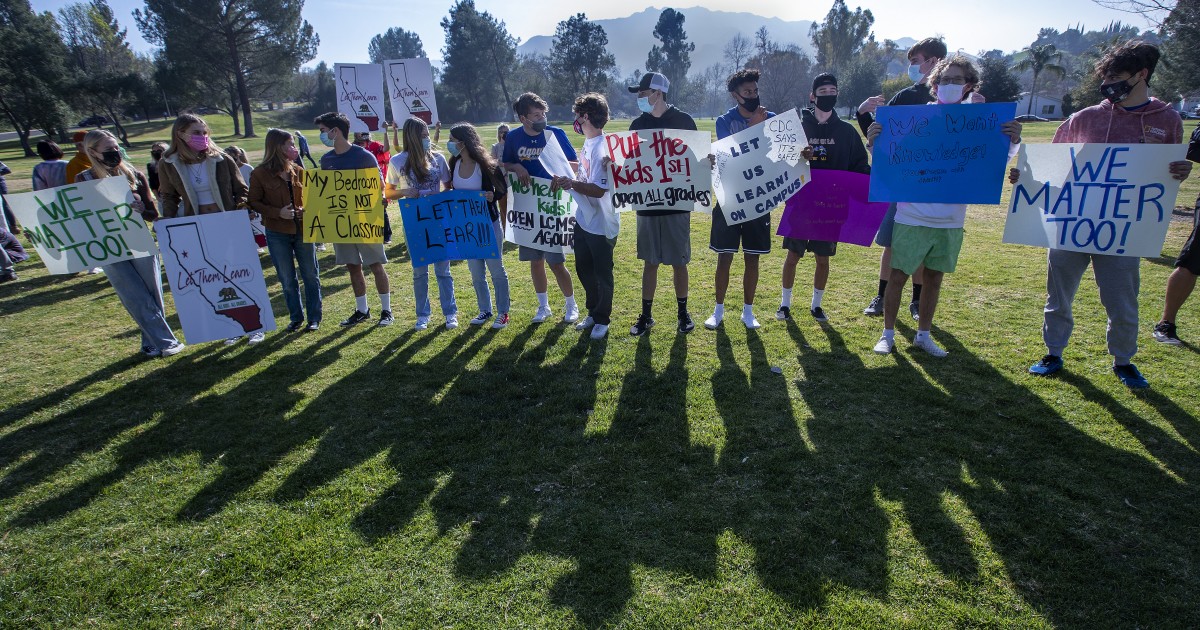 President Biden’s push to reopen schools nationwide could become bogged down in California, where powerful unions are demanding teachers receive COVID-19 vaccinations before returning to the classroom.

Although dates have been set in New York City and Chicago to send children back to elementary and middle schools, there are no such agreements in Los Angeles, San Diego and San Francisco, dragging out the process nearly a year after students began learning remotely.

It’s a thorny political problem for Biden, who pledged to reopen the majority of schools serving kindergarten through eighth grade by April 30, coinciding with his 100th day in office. The president is intensely proud of his support from organized labor, but he has also pledged to let science guide his approach to the pandemic, and a growing body of research shows that schools can be safe even without vaccinations.

Failing to get students back into classrooms would undermine Biden’s efforts to boost the economy by freeing parents to return more fully to work and derail one of his administration’s earliest promises.

Biden’s biggest roadblock appears to be in deep-blue California, where teachers unions are one of the strongest political forces and fear of the coronavirus remains high after a deadly winter turned the state into the country’s epicenter of infection. If labor leaders remain unbending on their inoculation requirements, getting students back into classrooms on Biden’s timeline will be difficult because the vaccine supply has failed to meet demand.

California Gov. Gavin Newsom said Tuesday that a deal on a framework for reopening the state’s schools could be reached this week.

“A plan not to open is not a plan,” he said. “We need a plan to safely reopen this school year.”

Supt. Austin Beutner recently described inoculations as “a critical piece to this reopening puzzle.” He said vaccinating 25,000 people — including teachers, principals, bus drivers and other staff — could help get 250,000 children back into elementary schools.

There’s no clear timeline to get San Diego’s children back into classrooms, nor in San Francisco, where district officials are working out an agreement with union leaders to make school reopening contingent on a drop in the city’s infection rate and the availability of vaccines.

Since pledging on his second day in office to reopen K-8 classes, Biden has mostly steered clear of the school debate as he focuses on pushing a $1.9-trillion stimulus package on Capitol Hill, but an inflection point may be around the corner as the Centers for Disease Control and Prevention prepares to release its official guidance on how to safely reopen schools.

A glimpse of how sensitive the issue has become arrived last week, when the agency’s director, Dr. Rochelle P. Walensky, said vaccines should not be a prerequisite to returning to in-person instruction.

“I also want to be clear that there is increasing data to suggest that schools can safely reopen and that that safe reopening does not suggest that teachers need to be vaccinated in order to reopen safely,” Walensky said Feb. 3.

The White House slammed on the brakes the next day, with Press Secretary Jen Psaki making the puzzling assertion that Walensky “spoke to this in her personal capacity” even though she was participating in an official administration briefing.

The final guidance, Psaki said, wasn’t ready yet, even though there had already been some reassuring signs about school safety.

Last month, scientists at the CDC wrote in the Journal of the American Medical Assn. that “the preponderance of available evidence” shows that classrooms do not become viral hot spots. They said it was important to continue driving down the transmission rates in the surrounding communities, by restricting indoor dining at restaurants, and requiring mitigation measures inside schools, including face masks and social distancing.

Measuring success is another sticking point. Psaki said Tuesday that hybrid models — a mix of remote and in-person instruction — would count toward the goal. The target, she said, is “teaching at least one day a week in the majority of schools by Day 100.”

However, administration officials haven’t said how many schools are considered open now, making it difficult to determine how much progress still needs to be made.

The Department of Education announced last week that it would be conducting a survey to gather data on schools’ opening status and how students have been learning during the pandemic.

“That may not happen because there may be mitigating circumstances, but what he really wants to do is everything within his power to help get to that,” he said during a virtual round-table hosted by teachers unions on Jan. 28.

Republicans are already trying to drive a wedge between Biden and parents, attacking Democrats as being beholden to organized labor at the expense of children.

“The obstacle is a lack of willpower,” Senate Minority Leader Mitch McConnell (R-Ky.) said last week. “Not among students. Not among parents. Just among the rich, powerful unions that donate huge sums to Democrats and get a stranglehold over education in many communities.”

Nearly 40% of students from kindergarten through 12th grade were attending classes in person every day as of Feb. 1, according to Burbio, which tracks local community calendars and school reopenings. Roughly the same amount are learning only remotely, and the rest are following a hybrid model.

Schools are far more likely to be open in rural communities, while urban areas are lagging behind.

The country’s first- and third-largest school districts — New York City and Chicago, respectively — have announced agreements for children to return to classrooms.

Elementary schools in New York have been open since December, and middle schools are scheduled to open the week of Feb. 25.

In Chicago, a tentative deal has pre-K students starting class on Thursday, with higher grades gradually returning over the following three weeks.

There’s only so much Biden can do to push education officials to reopen because schools are run by states, cities and local district officials.

But Biden has used little of the authority that he does have.

He has not proposed attaching strings to federal funding to prod schools to reopen, nor has he harnessed the bully pulpit to press the issue.

“It really seems like it’s not clear that the administration’s heart is in it,” said Rick Hess, director of education policy studies at the conservative American Enterprise Institute.