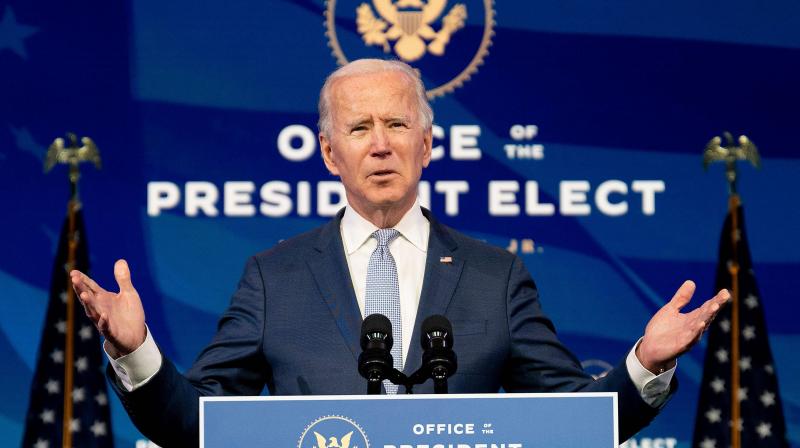 Washington: In an unprecedented assault on democracy in the US, thousands of supporters of outgoing President Donald Trump stormed the Capitol building here and clashed with police, resulting in four deaths and interrupting a constitutional process by Congress to affirm the victory of President-elect Joe Biden and Vice President-elect Kamala Harris in the election.

The Electoral College votes of Biden and Harris were finally approved early on Thursday after both the Senate and the House of Representatives rejected all objections raised by the Republicans to the votes in the states of Pennsylvania and Arizona.

The 78-year-old Democratic leader and his 56-year-old Indian-origin deputy will be inaugurated on January 20, it was announced after the constitutional process was finally completed by a joint session of Congress.

In the violence on Wednesday, four people died, including one woman who was shot by a police officer, amid protests and rioting on Capitol Hill that resulted in dozens of demonstrators being arrested, police said.

One woman was shot and killed by Capitol Police during the rioting. Police said three other people – a woman and two men – died after apparently suffering “separate medical emergencies” near the Capitol grounds.

At least 14 DC Metropolitan Police officers were injured, including one who was hospitalised after suffering serious injuries when he was pulled into a crowd and assaulted, Contee said.

Metro Police made 80 arrests related to unrest this week in downtown DC, including 68 arrests on Wednesday night, according to a mayor’s spokeswoman. Most were for violations of the mayor’s 6 p.m. curfew.

In a statement released just after the certification was finalised, Trump acknowledged his election loss. He said that even though he disagrees with the outcome, “there will be an orderly transition on January 20th.”

“I have always said we would continue our … fight to ensure that only legal votes were counted. While this represents the end of the greatest first term in presidential history, it’s only the beginning of our fight to Make America Great Again!”

The joint session of Congress, which is normally a ceremonial step, was halted for several hours when supporters of Trump breached the Capitol. Proceedings resumed and continued through the night after the building was cleeared.

Vice President Pence brought the Senate session back into order and proceeded with the verification process.

“The announcement of the state of the vote by the President of the Senate shall be deemed a sufficient declaration of the persons elected President and Vice President of the United States, each for the term beginning on the 20th day of January 2021…,” Pence said following the count of all of the state’s Electoral College votes.

Earlier on Wednesday, thousands of angry supporters of Trump swarmed over the US Capitol, forcing lawmakers to evacuate their chambers and delaying by several hours a normally routine procedure clearing the way for Biden and Harris to be sworn in as president and vice president.

House of Representatives Speaker Nancy Pelosi announced after hours of chaos around the white-columned edifice that police had secured the building.

Today, a shameful assault was made on our democracy, Pelosi said. It was anointed at the highest level of government. It cannot, however, deter us from our responsibility to validate the election of Joe Biden, she said.

Amidst the violence Biden said he was shocked and sad to see the US has “come to such a dark moment”.

“At this hour, our democracy is under unprecedented assault. Unlike anything we’ve seen in modern times. An assault on the citadel of liberty, the Capitol itself. An assault on the people’s representatives and the Capitol Hill police, sworn to protect them. And the public servants who work at the heart of our Republic…,” he said in an address to the nation.

“Let me be very clear. The scenes of chaos at the Capitol do not reflect a true America. Do not represent who we are. What we’re seeing are a small number of extremists dedicated to lawlessness. This is not dissent. It’s disorder. It’s chaos. It borders on sedition. And it must end now,” Biden said.

“I call on President Trump to go on national television now to fulfill his oath and defend the Constitution by demanding an end to this siege,” he said.

Harris also demanded an end to the assault on the US Capitol by the supporters of Trump.

I join President-elect Joe Biden in calling for the assault on the Capitol and our nation’s public servants to end, and as he said, allow the work of democracy to go forward”, Harris said in a tweet.

Trump has refused to concede the election. He alleges that there was a massive voters’ fraud and electoral malpractice. Election officials have denied the allegations.

All four living former US presidents — Barack Obama, George W Bush, Bill Clinton and Jimmy Carter — condemned the actions of the pro-Trump rioters who forced an evacuation of the House and Senate chambers of the US Capitol and underlined the need for a peaceful transfer of power.

Meanwhile, in an unprecedented move, Facebook founder Mark Zuckerberg said on Thursday that President Donald Trump’s accounts on its popular social media platforms – Facebook and Instagram – would remain suspended until the inauguration of President-elect Joe Biden on January 20.

Announcing the decision, Zuckerberg said the risk of allowing President Trump to continue to use the platform during this period is “simply too great.”