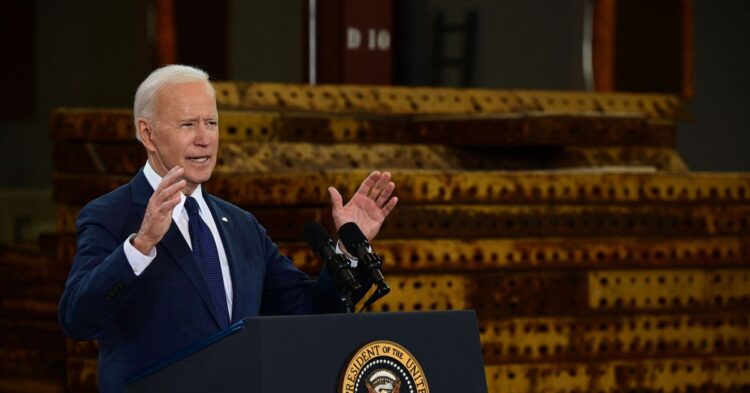 President Joe Biden has unveiled what he called a $2 trillion infrastructure proposal, the first of two parts of his “Build Back Better” agenda. And one thing is clear: The plan takes an expansive view of what “infrastructure” means.

The plan includes about $621 billion for roads and bridges, the single biggest item in Biden’s plan. Another $165 billion would go toward public transportation, with a big chunk of that going to Amtrak. It would also pay for electric car recharging stations, water systems (including eliminating all lead pipes), high-speed broadband infrastructure, building and retrofitting homes and other buildings, plugging oil and gas wells, and modernizing the electrical grid — all stuff that could fit into a traditional definition of “infrastructure.”

But then the proposal gets more creative with the term.

Biden’s plan calls for expanding Medicaid coverage of caregiving services for the elderly and people with disabilities, which includes a portion to improve benefits and pay for caregivers. It also would put more money into schools and child care services. And it includes support for job training, violence prevention programs, military veterans’ hospitals, pandemic preparedness, and new research, including for technologies to confront global warming.

One of the parts of the proposal calls on Congress to pass another bill entirely: the Protecting the Right to Organize (PRO) Act, a sweeping pro-union bill.

All of this almost certainly sounds good to progressives, covering issues from climate change to child and elder care. But it doesn’t fit the steel-and-concrete mold of infrastructure that American politicians, including former President Barack Obama, have talked about in the past few years when they talk about infrastructure proposals.

Instead, Biden’s team is in effect arguing for “human infrastructure” — a term progressives have used a lot recently to refer to health care, education, and other services that are a key part of the modern economy. The concept goes back decades, with earlier references in academic work. But nowadays it’s been cited by everyone from the Brookings Institution think tank to Sen. Bernie Sanders (I-VT) as a way to get Americans and policymakers to take a broader view of the kinds of things we can spend money on to build.

The idea: The US already spends a lot of money on roads, bridges, and other traditional infrastructure projects — and for good reason, because these are things people need to simply get around and get to work. But day-to-day life and work in the US require other kinds of infrastructure, too. And governments can build to support it, from high-speed internet services (considered a part of typical infrastructure plans) to child care (which usually isn’t).

So “human infrastructure” is about building up the structures that can help both boost the economy and let people participate in it. One way to look at it: These projects are what allow people to take advantage of more traditional infrastructure projects. Someone isn’t going to be able to use that road or bridge to get to work if she has to stay home to take care of her kids or parents.

Politics, of course, plays a role in the very full plan. With Democrats holding only a slim majority in Congress, they’re forced to pass bills in the Senate through a “reconciliation” process that lets a simple majority bypass the filibuster and approve legislation. But historically, that process can only be used to get one bill across each year. So Democrats looking to get more done in a short period — particularly before the 2022 midterm elections — have looked for ways to cram more progressive priorities into bills.

The concept of “human infrastructure,” then, may let Biden and other Democrats get more stuff done than they could have otherwise.