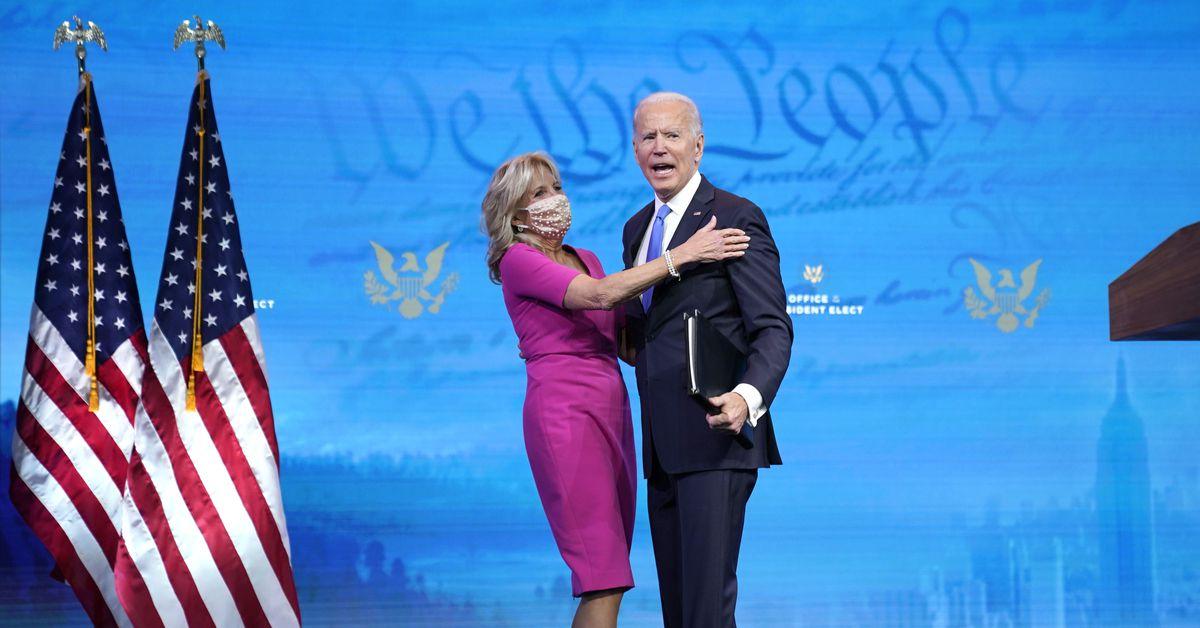 Over the past six weeks since Election Day, President-elect Joe Biden carried about his business while largely ignoring the circus surrounding President Donald Trump’s incessant lies about election fraud and refusal to concede. That changed a bit on Monday.

Speaking hours after the Electoral College officially voted to confirm his victory over Trump, Biden declared victory. He also criticized the president, whom he portrayed as on the wrong side of the struggle for democracy, for refusing to acknowledge the reality of his defeat.

“In this battle for the soul of America, democracy prevailed,” Biden said. “We the people voted. Faith in our institutions held. The integrity of our elections remains intact. And so now it is time to turn the page. To unite. To heal.”

Biden noted that he won the same number of electoral votes as Trump did following the 2016 election — 306, though Trump ultimately received only 304 electoral votes because of two faithless electors — and said, “At the time, President Trump called his Electoral College tally a landslide. By his own standards, these numbers represented a clear victory then, and I respectfully suggest they do so now.”

Biden: “306 electoral votes is the same number that Trump & Pence received when they won in 2016. At the time, Trump called his electoral college tally a landslide. By his own standards, these numbers represented a clear victory then & I respectfully suggest they do so now” pic.twitter.com/StyOFRJoxn

At another point, Biden took an indirect shot at Trump, saying “the flame of democracy was lit in this nation a long time ago. And we now know that nothing — not even a pandemic, or an abuse of power — can extinguish that flame.”

Biden addressed the flood of failed lawsuits the Trump campaign has filed since the election and the Supreme Court’s refusal last week to take up a flimsy case that could’ve overturned his victory. He also praised state and local officials on both sides of the aisle for overseeing a fair election while refusing to be “bullied” by Trump.

“In America, when questions are raised about the legitimacy of elections, those questions are resolved through the legal processes. And that’s precisely what happened here,” he said. “All the counts were confirmed … none of this has stopped baseless claims.”

Later, Biden noted that “respecting the will of the people is at the heart of our democracy,” adding that when Trump won four years ago, “it was my responsibility to announce the tally of the Electoral College votes to the joint session of Congress … I did my job.”

Biden: “4 years ago, when I was VP, it was my responsibility to announce the tally of the Electoral College votes to the joint session of Congress … I did my job … now it’s time to turn the page as we’ve done throughout our history.” pic.twitter.com/eCHWQMWxPo

Although a majority of House Republicans indicated in writing last week that they supported the aforementioned case that could have overturned the election results, Biden extended an olive branch, saying, “I’m convinced we can work together for the good of the nation on many subjects. That is the duty owed to the people, to our Constitution, to our history.” He also thanked the Senate Republicans who have already acknowledged his victory.

Biden, who sounded noticeably hoarse throughout, closed by noting that the joy of his win “is tempered by the pain so many of us are feeling today. Our nation [today] passed a grim milestone: 300,000 deaths due to this Covid virus. My heart goes out to each of you during this dark winter of the pandemic.”

Biden winds down his speech: “We have always set the example to the world for a peaceful transition of power. I know the task before us won’t be easy. It is tempered by the pain so many of us are feeling today. Our nation passed a grim milestone. 300,000 deaths due to this virus” pic.twitter.com/hSDGAK6Pkg

While the president-elect wants to turn the page from the election, the president continues to toss around lies about it being stolen from him. Stephen Miller, who serves as both a White House official and campaign adviser, indicated where things might be heading during a Fox & Friends appearance earlier Monday when he said that “an alternate slate of electors in the contested states is going to vote [for Trump] and we are going to send those results to Congress.”

But that’s just political theater. The fact of the matter is that Biden is president-elect. And as he noted, “Trump was denied no course of action he wanted to take” in challenging the results. As Biden emphasized on Monday, there is no escaping the reality that Biden’s victory was the product of a free and fair election, whether Trump wants to acknowledge it or not.