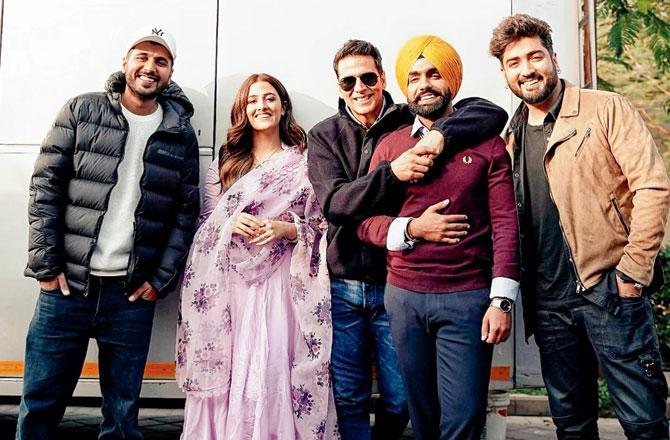 Nupur Sanon celebrated her birthday on the set of Filhall 2 in New Delhi. On Tuesday, she turned 25. Kriti Sanon’s sister has been shooting for the sequel of singer-composer B Praak’s music video with Akshay Kumar. Singer Ammy Virk, who also features in the song, along with director Arvinder Khaira and lyricist Jaani, made it special for her. As Praak was unable to make it for the shoot, the celebrations will continue for the newcomer when he joins the unit.

Marking the occasion of her birthday, the team of Filhall commenced the shoot in Delhi, pictures of the same were shared by Nupur on her social media. “#Nupursanon said, “it’s my first working birthday as an actor!! My heart is full and I’m so thankful to have spent my special day with such talented energies. There couldn’t have been better better birthday gift from the universe than to have me on set in the front of the camera. The journey of #Filhall2 begins today! [sic]”

Post the success of ‘Filhall’, there has been great anticipation for the sequel as well as Nupur Sanon’s Bollywood debut. Recently, there have reports of Pooja Entertainment launching Nupur. The refreshing chemistry between Akshay Kumar and Nupur Sanon became the talk of the town soon after the release of Filhall.