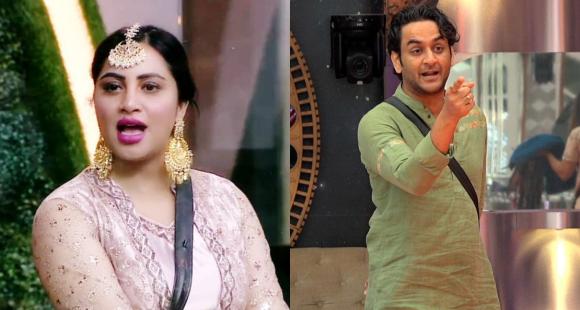 Bigg Boss 14 is witnessing a side of Vikas Gupta like never before. The producer has opened up about his personal struggles. From talking about Priyank Sharma to his family issues, everything is out in the open. Amidst it all, viewers saw the Ace Of Space host claim Arshi Khan blackmailed him. The latter’s family has now decided to take the legal route over it.

For the unversed, Vikas during the recent Bigg Boss 14 episode claimed that Arshi had constantly been in contact with his mother, Sharda Gupta. He even accused that Khan blackmailed him to reveal personal details. Arshi allegedly even threatened to do a #MeToo case. But the family now has quashed these claims.

In a conversation with Bollywood Life, Arshi Khan’s close friend Flynn Remedios told BollywoodLife, “Arshi’s family is upset about these blackmail claims. Yes, they did talk at times but she never blackmailed him. We are planning to send a show-cause notice for defamation to Vikas Gupta and his mother, Sharda. We have consulted Advocate CA Ambani of Goregaon (East) in this matter. They are guiding us in the matter. Arshi Khan’s family is from Bhopal and does not know how to handle such matters.”

Meanwhile, Vikas Gupta also made certain claims about his own family. He claimed that his family members stayed with him over his property. They believed that he would never get married since he is bise*ual and all of his assets would belong to them.

Sharda Gupta, however, says she’s ready to forget the past and start afresh. “I will give my son lots of love ones he’s out but right now he needs fans’ support and I request you all to vote for him and save him from the nominations,” she said.

RELATED:  Say it like a spy: The world of John le Carré