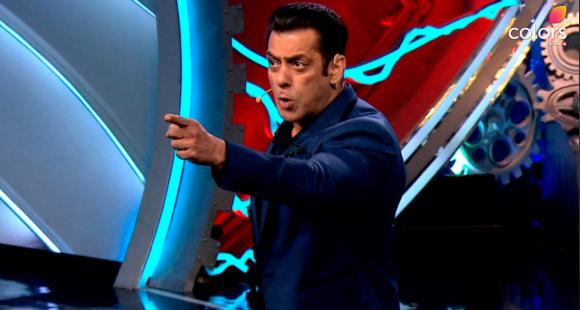 Tonight’s episode of Bigg Boss 14 will witness Salman Khan expressing his disappointment about contestants using foul language in the house and disrespecting each other on national television. Read on to know what all happened on Bigg Boss 14 on February 6, 2021.

Tonight is going to be one of the most interesting Weekend Ka Vaar episode on Bigg Boss 14 as host Salman Khan will be seen grilling the contestants on the show. The superstar is mighty miffed with the housemates for their behaviour during the week and schools all the contestants for their disappointing behaviour. In fact, the Dabangg star took Arshi Khan, Rubina and Rakhi on radar and yelled at them for their choice of words on national television. So, without further ado, let”s know in detail what all happened in the Bigg Boss 14 house on February 6, 2021.

10:30 PM: Salman even lashes out at the contestants for judging others on the basis of the brand. He even took Arshi on radar and told her that she had come in the commoner season and she should value the respect she has been receiving. The housemates are shocked to see Salman’s anger are seen discussing what happened. On the other hand, the connections are of the opinion that Salman’s anger was justified as the contestants went over the board this time.

10:10 PM: Next on Salman’s radar is Rubina for claiming that the makers have been encouraging Rakhi’s behaviour. Salman takes a jibe at everyone that they haven’t asked anyone to behave the way are doing in the house. Instead, it is their mind who is doing it.

09:56 PM: Salman interacts with contestants and discusses the matter of content of the show. He says that the show is about bringing out the real personalities of the contestants and show their real emotions. He then quizzes every contestant about their incidents in the house if it was their real emotions or just done for content. Later, Salman slams housemates for targeting Rakhi and Devoleena for their breakdown and naming it as content for the show. Salman asks Rahul if she found Rakhi faking about her marriage. The Indian Idol singer stated that it was all true. Later, Salman praises Rahul for supporting every contestant and being kind to everyone in the house.

09:48 PM: Salman now introduces the supporters of the contestants in the house. Jasmin came for Aly, Rahul came for Abhinav, Jaan came for Nikki, Toshi for Rahul, Jyotika came for Rubin, Vindu will be supporting Rakhi, Farhan came to support her sister Arshi and Paras came for Devoleena. Salman asks Jasmin if the contestants take decisions just for content and quizzed about her changed equation with Rubina.

09:43 PM: Salman says because of Rakhi he has been accused of being biased. Rakhi apologises for her behaviour again. Later, Devoleena and Rahul try to explain Rakhi about where she can change her behaviour and how she can stay calm in the house. Rakhi is of the opinion that this shows is quite important to her and she will mend her ways.

09:34 PM: Salman starts his grilling session and the first on his radar is Rakhi. He slams her for using offensive language inside the BB house. While Rakhi tries defending herself, but the superstar isn’t in the mood to listen. He explains to her where she went wrong and the actor looked visibly upset with Rakhi. Salman mentioned that while he did support her, he has been visibly disappointed by her recent behaviour in the house. Salman asks Rakhi that if she cannot stay in her limits, she should leave the house and opens the door of the theatre room. Rakhi apologies for her behaviour and assures that she will not repeat the mistake.

09:16 PM: While Disha and Randeep interacts with the contestants, the Highway star praises Arshi for her command over Urdu. Later Harsh Rajput enters the BB house as he gives a glimpse of his role from Naagin spin-off Kuch Toh Hai. He even goes on a romantic date with Rakhi Sawant aka Julie and later he asks her opinion about the contestants in the house.

09:00 PM: Salman Khan grooves to the tunes of his song Slow Motion with Disha Patani and the lady was seen sharing her experience of working with the superstar in Radhe: Your Most Wanted Bhai. Later Salman welcomes Randeep Hooda on the stage who reveals that Radhe will be releasing on Eid this year. The superstar also gives Disha a secret tour of Bigg Boss house.