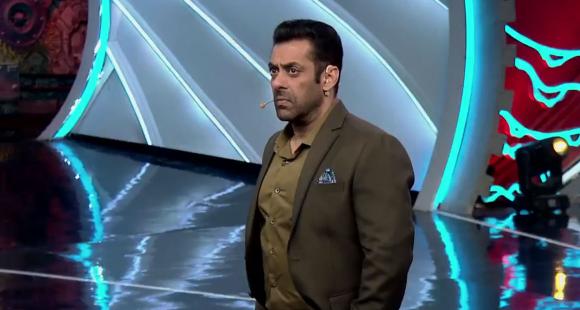 In the Weekend Ka Vaar episode of Bigg Boss 14, Salman Khan will be seen expressing his disappointment towards Aly Goni and Rahul Vaidya for their behaviour towards Rakhi Sawant.

Tonight’s episode marks the last Weekend Ka Vaar of Bigg Boss 14 and it has come with new twists for the contestants. The show will witness Salman Khan giving his views about the contestants’ performance during the ticket to finale task. While the superstar will be all praises for Rubina Dilaik, Nikki Tamboli and Rakhi Sawant, it will be Rahul Vaidya and Aly Goni who were on his radar this time. In fact, the superstar is also of the opinion that Aly has been presenting his supporter Jasmin Bhasin in a bad light. So, without further ado, let”s know in detail what all happened in the Bigg Boss 14 house on February 13, 2021.

10:45 PM: Each contestant in the game is of the opinion that they deserve the first spot at the moment. While Aly defends himself on first spot, Rahul believes he lack the zeal. On the other hand, Devoleena is upset as she is being ranked differently while Eijaz is given different ranks. Following this, Rubina gets first rank followed Rahul, Aly, Nikki, Rakhi and Devoleena respectively.

10:30 PM: Rahul apologises to Rakhi for being rude to her. On the other hand, Aly tries explaining his point again to Jasmin for not shredding the money amount. Now it is time for the housemates to rate their performance and give themselves the position from 1-6 and Aly, Rakhi, Rubina, Rahul, Nikki and Devoleena are seen discussing about the same.

10:10 PM: Next on Salman’s radar is Vindu Dara Singh, who had entered the house as Rakhi’s supporter. The Dabangg star feels that Vindu has been demotivating her during the task instead of supporting her. Later Salman also believes Aly has been presenting Jasmin in bad light while the latter has been continuously supporting her. While Aly tries defending himself, Salman believes Jasmin has been giving him a reality check.

09:47 PM: The superstar asked Rahul and Aly why Rakhi has been on their radar and bullies her. While they have their own opinion, Rahul once again loses his calm to which Salman takes a jibe at him again. Salman was in full support of Rakhi and her arguments in the house. The superstar believes that the two have been bullying her and it is evidently visible. However, Jasmin believes no one can bully Rakhi.

09:39 PM: Salman asks Rahul’s opinion in the matter and takes a witty jibe at Aly for repeating Rahul’s words. Both Rahul and Aly were of the opinion that Rakhi shouldn’t have shredded the amount. Salman’s explains the point to Rahul an Aly and asks them to read the rules of the task once again to prove where they went wrong.

09:27 PM: Salman hails Rubina and Nikki for their equation. While the superstar lauded Rubina’s effort during ticket to finale task, he was impressed by Nikki’s unconditional support for Rubina. Later he also praised Rakhi for her zeal to make it to the finale week. The conversation didn’t intend here. Salman quizzed Rubina about not supporting Rakhi during the shredding of the money task. It was evident that Salman had loved Rakhi’s clear intentions for making it to the finale week.

09:18 PM: Salman discusses the labels given to the supporters. While Jasmin didn’t get any title, Salman asks Rubina which title she should get to this, the lady says ‘Machis ki tili’. However, Aly feels she is the pillar of strength. Later, Salman takes a dig at Aly for not participating in giving the title task.

09:06 PM: Salman gives a glimpse of the ongoing task wherein the housemates have to give different titles to the supporter. The housemates are giving their opinions about different titles and which suits which supporter. Amid this, Paras and Devoleena get into an argument and the actress is of the opinion that Paras didn’t support her during the ticket to finale to task.

09:00 PM: Salman graces the stage for season’s last Weekend Ka Vaar and announces that post the show he will being working on Pathan, Tiger, Kabhi Eid Kabhi Diwali and other movies. He also revealed that Bigg Boss 14 will have its grand finale next week