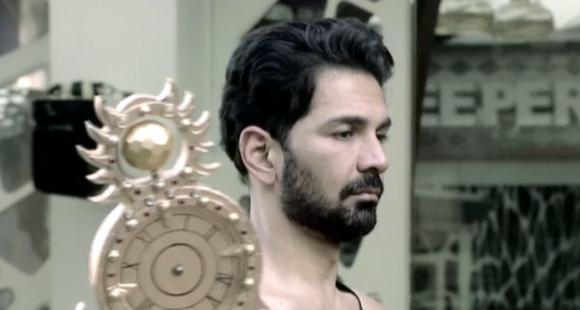 The Bigg Boss 14 house got caught in a time loop during the latest episode. Here’s how a few of the housemates played their games in between the same.

10.00 am: Nikki says that Rakhi has distanced herself from Abhinav.

10.45 am: Rahul asks Nikki who she thinks will go home. She takes her own name by saying that she will lose a friend in this process.

1.30 pm: Vikas asks Rakhi what happened between her and Abhinav the previous day. She tells him everything that’s in her mind. He asks her what has gone wrong and reminds her that she should know Abhinav is a married man. She talks to him about her husband Ritesh. Rakhi then requests Vikas to patch her up with the husband-wife duo

3.15 pm: The lights flicker inside the house and the housemates wonder what is happening. All of them are asked to gather in the garden area. Bigg Boss informs them about the time loop in which people’s actions get repeated. They are given a task on these grounds. Those who perform the task well will get access to all the luxuries inside the BB house. Rubina reads out the actions that the housemates will be doing within the time slots.

3.45 pm: Rubina talks to Aly about her phobia of water. Meanwhile, Arshi strategizes with Rahul about the game. Nikki asks Rubina to give her the coffee. She asks Rahul to make a meager amount of the same. Arshi hides the brooms inside the bathroom area. Meanwhile, Rubina and Aly have a discussion regarding the game.

4.00 pm: Rahul tells Nikki somebody hid the brooms but refuses to reveal the name of the person. This makes her angry and requests him to tell her the name. On the other hand, Abhinav and Rubina have a discussion about Rakhi. Nikki comes there and tells them about Rahul’s behaviour.

4.15 pm: The lights flicker and the housemates begin the task. A song plays and the ones who are allotted the task begin dancing to the tunes of the same. The rest of them also continue with their actions. Nikki tries stopping Rahul from doing the task because of which he confronts her. He then tries clearing things out with her. She asks him the reason behind not revealing the name to her earlier. Nikki gets into an argument with Rahul and breaks down after the same. He tries consoling her and clears things out. Meanwhile, Arshi tries to stop Rakhi from giving an oil massage to Abhinav. As a part of the task, Rubina falls into the swimming pool and is saved by Aly. Vikas also does Rakhi’s makeup but she goes away in between.

5.00 pm: Bigg Boss informs the housemates that Abhinav is out of the task as he did a mistake. He is also declared a time king. Rubina then tells him to spoil Rakhi’s game. Arshi questions Rahul’s friendship with Nikki.

5.45 pm: The buzzer rings post which the housemates are caught in a time loop and performs all the activities once again. Rakhi comes to massage Abhinav again but the oils go missing. She also asks him not to move.

6.30 pm: Bigg Boss asks Abhinav to name that person who committed the most number of mistakes within the slot. He takes Rakhi’s name in this regard.

6.45 pm: Rakhi asks Abhinav the reason behind targeting her which he denies. She then says that she will take revenge for the same. He tries explaining things but she talks other stuff in between.

7.00 pm: Arshi asks Rubina if she has asked her for any demand in the past few days. Both Rubi and Abhinav deny the same. She gets into an argument with Arshi in between.

7.15 pm: The lights flicker again and the housemates perform all the actions in a repetitive manner. Later on, Nikki and Arshi get into an ugly fight.

7.45 pm: Abhinav next declares that Devoleena and Rahul are out of the task.

8.00 pm: Rahul and Abhinav discuss the task and the latter gives the reason behind taking this name earlier. Meanwhile, Aly gets into an argument with Arshi. Rakhi, Rahul, Arshi, and others discuss how Abhinav is playing the game.

8.15 pm: Rakhi says that she wants the task to get canceled. Aly and Rahul have a discussion about Abhinav.

8.30 pm: Rakhi tells Abhinav that she is in love with him and that she won’t leave him. However, the latter pays no heed to her and walks away. Rahul tries giving a reason to Abhinav as to why he should not have been declared out. However, neither Abhinav nor Rubina or Nikki pay heed to him.