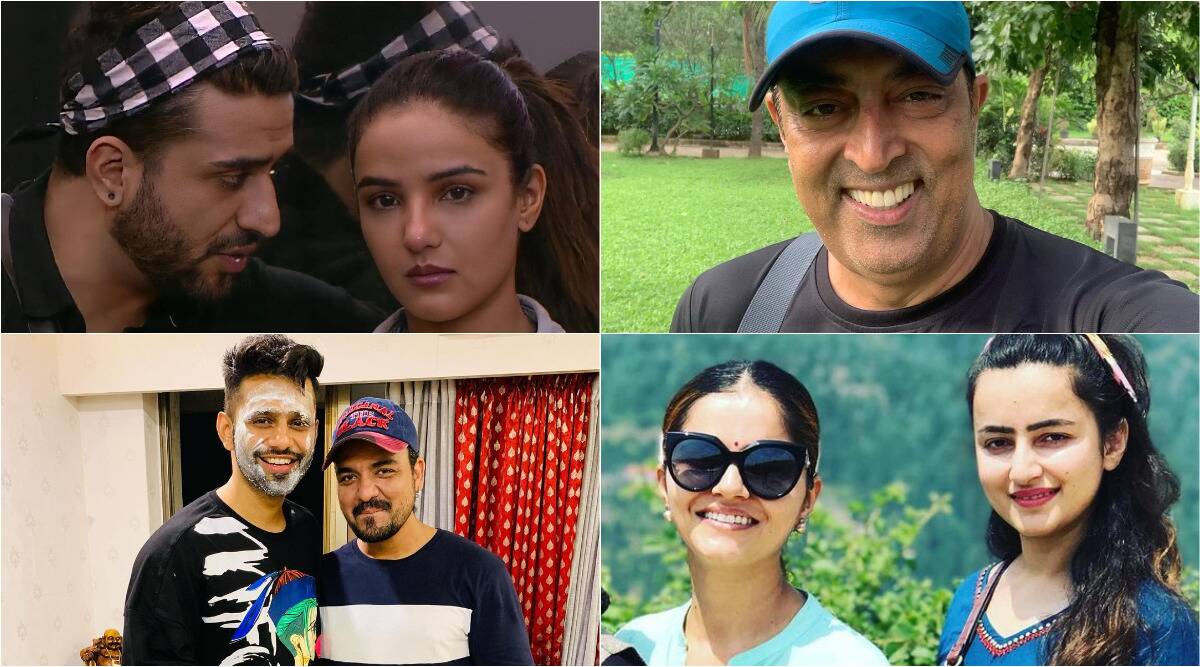 On Monday, Bigg Boss 14 will welcome friends and family of contestants as part of the ‘Connection Week’. These connections will stay in the house for a week and participate in tasks with the housemates. Having followed the season as an audience, they would also have the best advice and suggestions to give to their loved ones in the last phase of the game.

Before entering the house, Jasmin, Toshi, Vindu and Jyotika, in an exclusive chat with indianexpress.com, reviewed their connection’s game.

Commenting on Aly Goni’s performance in Bigg Boss 14, Jasmin Bhasin shared that he has been the best contestant so far. Jasmin also revealed that she has fallen in love with him even more after seeing the way he conducts himself.

Calling Aly a one-man army, Jasmin said, “Aly deserves all the adulation that he has been getting. Not just as someone who loves him, but even as an audience, I can vouch that he is the best player in the season. He has never played dirty or tried to put someone down. Both of us never used our relationship for content and have been honest with ourselves without worrying about our image. He has such a strong spine, and believes in standing up for the right. A man of substance, Aly doesn’t need anyone to prove his points. He may have entered as a wild card, but he has given the most to the show.”

Jasmin Bhasin added that while she doesn’t know much details about her involvement in the following week, she would do anything to make Aly Goni win the show. “Even if I was in the house, I think I would have wanted Aly to win. He deserves it more than anyone in the show. Also, I think I would be happiest seeing him with the trophy,” she concluded.

For Toshi Sabri, while the invitation call from Bigg Boss came as a surprise, he is excited to join his good friend Rahul Vaidya in the house. The singer shared that they are each other’s ‘4-am friends’ and thus it was his duty to support and encourage Rahul in the last phase of the reality show.

Sabri has been following the season carefully and feels Rahul Vaidya is a champ who will eventually win the show. He added that his friend has the drive and passion, and wants to always win, a quality that will help him in the game.

Reviewing Rahul Vadiya’s stint on the show, Toshi Sabri said, “Initially, Rahul did have a low phase, but he emerged out of it beautifully. He has seen a roller coaster journey in the house. If today people are trending him on social media or wishing for his win, he has given them the confidence with his performance. He has impressed the world with the way he conducted himself on the show. Rahul is smart, mature and full of empathy. He has never indulged in unnecessary fights, and has always tried to sort out his differences after any showdown. He has all the qualities of being the Bigg Boss 14 winner ”

Given Rahul Vaidya had chosen to walk out during the early finale, many feel that could cost him the trophy. However, his friend doesn’t agree as he shared, “I don’t think it impacted Rahul’s game. Also, a lot of people in this season have exited and re-entered. I think it was his opponents’ trick to make him feel weak and shake his confidence. However, now that I am going in, I will assure that he knows the truth. I will give him all the encouragement and support needed for his victory.”

Season 3 winner Vindu Dara Singh is ready with pieces of advice that he wants to give Rakhi Sawant as soon as he steps in. He plans to firstly get Rakhi out of her ‘TV bahu’ mode. “It’s a reality show, and people need to see the real Rakhi. We all know that she is a little different from all of us, is a bit controversial and can even hit under the belt. But she has a clean heart, and I would ask everyone to take her words with a pinch of salt. As for her, she needs to stop going overboard all the time and bring to the fore her fun side,” shared Vindu.

The actor also mentioned that while initially Rakhi’s equation with Abhinav seemed cute, she can get into trouble for her recent acts. Calling himself the ‘Messenger of God’ for Rakhi, Vindu said that he would like to sort differences between Abhinav-Rubina and Rakhi as he feels the couple genuinely loved her.

Talking about Rakhi Sawant’s performance, Vindu Dara Singh lauded her for all the entertainment that she added in the dull season. He said, “She added life to the show. I think most contestants do not realise Bigg Boss is a once-in-a-life opportunity. It’s actually bigger than getting a film. Look at what Bigg Boss did to Sidharth Shukla, Shehnaaz Gill or Asim Riaz. They all became superstars. This season everyone has been so dull. It’s only Rakhi who makes the show fun.”

Rubina Dilaik’s younger sister Jyotika shared that while she is excited to enter the Bigg Boss 14 house, she is quite nervous, given she does not belong to this world. Jyotika said that she was apprehensive about how things would go but realised that people would judge nevertheless. This is why she has decided to be herself and only focus on improving her sister’s game.

Commenting on Rubina’s game, Jyotika shared, “I would say that she has climbed the ladder step by step. Initially, when people did not understand her, they levelled several allegations against her. But now everyone wants to be her friend. Even the audience has been supporting her as they have come to know her better. I think she has played a wonderful game.”

The Shakti actor is often accused of being authoritative and dominating. However, her sister feels that it’s because Rubina knows how to put across her points, others target her. She said, “When you are clear about your thoughts and also have a voice, you would put it out. Everyone in the house speaks, but their voices get lost soon. And because she is vocal, people portray her in a way that suits them. I think there’s nothing wrong in putting forward your opinion. She has never forced anyone to listen to her. It’s wrong to say that she is authoritative.”

For Jyotika, it’s going to be a family reunion as she would also meet her brother-in-law Abhinav Shukla. Sharing that she too feels Rakhi Sawant goes a little overboard with Rubina-Abhinav, Jyotika added that she would discuss the matter with Rakhi and the couple.

Lastly, on asked what advice she would give to Rubina Dilaik after entering the show, the loving sister said, “I think she is doing really well, and knows what should be done. It’s just that as an audience I sometime feel that she gets a little upset after Weekend Ka Vaar. While she takes Salman Khan’s suggestions in her stride, it does affect her. I would try to boost her morale.”