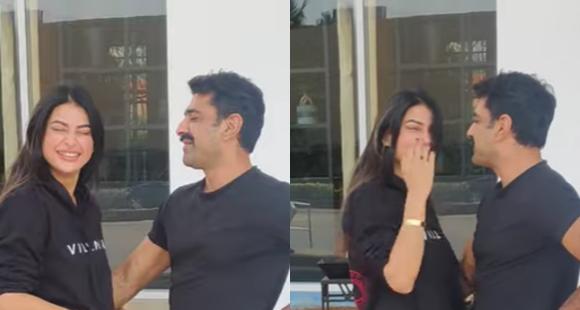 Eijaz Khan and Pavitra Punia’s love story is now known to everyone. Meanwhile, check out an exclusive video of the duo while both of them were spotted by the paparazzi.

Bigg Boss 14 witnessed love brewing between two contestants – Eijaz Khan and Pavitra Punia. What initially started off with a series of fights later led to melting of hearts. Eijaz was completely heartbroken when Pavitra was evicted from the BB house weeks before the challengers entered the same. The audience got to see how ecstatic the actor was when she came to meet him during the family week. He also promised to make the fourth call to her as soon he was out!

A few weeks ago, Eijaz also had to exit the Bigg Boss house owing to prior work commitments. Former contestant Devoleena Bhattacharjee is currently playing as its proxy. Meanwhile, the paparazzi were more than happy to spot the actor with his ladylove Pavitra on Wednesday. The latter couldn’t stop but blush while hugging Eijaz as the shutterbugs clicked them. Both of them looked adorable as they twinned in black outfits as can be seen in the video.

Earlier, Eijaz Khan had called out those who criticized his feelings for Pavitra Punia and called it fake. Meanwhile, she also accompanied him during the virtual conference that he had with the press a few weeks ago in the Bigg Boss 14 house. Talking about his proxy Devoleena, she could be seen bonding with Rakhi Sawant, Aly, and others during the latest episode. However, as shown in the promo video, the actress is going to lose her cool and burst out at Arshi and Rubina. As for Eijaz Khan, it is still not sure whether he will enter the show again in the future.

Also Read: Eijaz Khan is spotted on the set of his upcoming film post eviction from Bigg Boss 14; SEE PHOTO