Home EntertainmentGossips Bigg Boss 14 PROMO: Arshi Khan gets into a verbal spat with Rahul Vaidya; Asks him ‘To respect women’

Bigg Boss 14 PROMO: Arshi Khan gets into a verbal spat with Rahul Vaidya; Asks him ‘To respect women’ 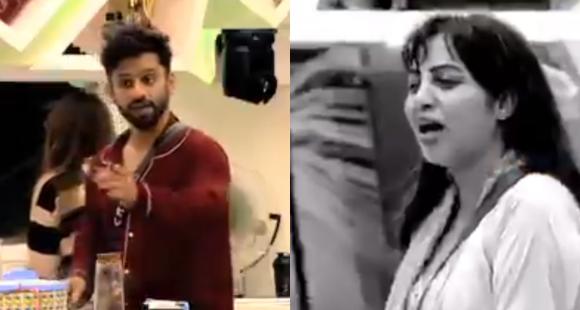 Rahul Vaidya has turned enemies in the house and is finding reasons to fight with each other. In the coming episode, viewers will see them getting into a nasty fight.

Bigg Boss 14 PROMO: Arshi Khan gets into a verbal spat with Rahul Vaidya; Asks him ‘To respect women’

There is nothing permanent in the Bigg Boss 14 house. No relation, friendship, or even emotions. Everything changes inside the house and so is the friendship of Arshi Khan and Rahul Vaidya. Once good friends are now enemies of each other. In the coming episode both we will be seen getting into a verbal spat and accusing each other. The Colors TV channel has released a new promo of the upcoming episode showing Rahul and Arshi fighting. Rahul has accused her of being fake.

Arshi Khan had ditched Rahul Vaidya and supported Vika Gupta in the captaincy task. She had said him that she will support Rahul but at the last moment, Arshi backed Vikas Gupta. This had hurt Rahul and he was very much disappointed with her. After this incident, Rahul Vaidya and Aly Goni had ended their friendship with Arshi Khan and even said that she is trustworthy as she betrays everyone.