Home EntertainmentGossips Bigg Boss 14 PROMO: Nikki Tamboli warns Rakhi Sawant about misbehaving with her; Asks her to stay in limits

Bigg Boss 14 PROMO: Nikki Tamboli warns Rakhi Sawant about misbehaving with her; Asks her to stay in limits 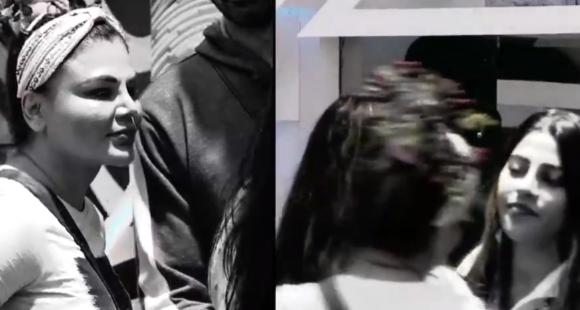 Rakhi Sawant and Nikki Tamboli are once again at loggerheads as they will fight for makeup accessories in the coming episode of Bigg Boss 14. In the new promo, Nikki was seen threatening Rakhi to behave properly.

Bigg Boss 14 PROMO: Nikki Tamboli warns Rakhi Sawant about misbehaving with her; Asks her to stay in limits

The Bigg Boss 14 house is getting more interesting as it is inching towards the finale as the contestants are seen fighting with each other even on small issues. Rakhi Sawant, in recent episodes, is picking up fights with everyone. After her ugly fight with Rubina Dilaik and Abhinav Shukla, she will be seen getting into a heated argument with Nikki Tamboli over makeup which will result in high voltage drama in the upcoming episode of BB14. The Colors TV channel had just dropped a new promo video on its social handle.

The video shows Rakhi and Nikki locking their horns and threatening each other. The promo starts with Nikki asking Rakhi to return her hair bands. Rakhi replies rudely, “Abhi main kitchen mein busy hu.” Her reply leaves Nikki irked and this sparks a heated argument between the ladies as Rakhi demands to have her eyeshadow back. Following the war of words, Nikki told Rakhi that those things belong to me so I am taking it back. She even returns Rakhi’s eye shadow.

But Rakhi doesn’t stop here and continues to pass comments on her. Later, Nikki threatens her not to misbehave with her and stay in her limits or else she will slap her. Abhinav Shukla and Arshi Khan are also seen intervening in their fight and trying to control them.

Catch it before TV on @VootSelect.@BeingSalmanKhan #BiggBoss2020 #BiggBoss14 #BiggBoss pic.twitter.com/jDPxM6ZhIU

Recently, Rakhi also had a fight with Abhinav Shukla and called him ‘Tharki’. This comment didn’t go well with Rubina and she threw a bucket of water on Rakhi.