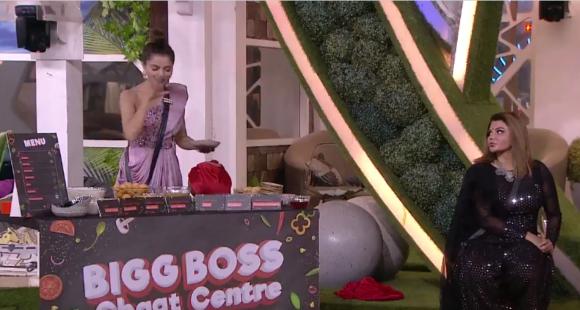 The Bigg Boss 14 house is full of excitement. The show makers always come up with different tasks for the entertainment of the housemates. Host Salman Khan is back at the show and was seen grilling the contestants for their behaviour in the last episode. He schooled Rubina Dilaik, Abhinav Shukla and Nikki Tamboli for their rude behaviour. Meanwhile, the channel has released a new promo of the upcoming episode where host Salman Khan is seen asking housemates to prepare a chaat dish that best resembles each other”s personality.

She even accused Rakhi of being fake. Salman then asks Rakhi to make chaat for Rubina. Rakhi also targets Rubina by saying that she is very poisonous. In the last few episodes, Rakhi has gone all out to woo Abhinav Shukla which has irked his wife Rubina who even warned Rakhi and told her to not cross her limits.

Rakhi was also trolled by fans for cutting Abhinav’s undergarment which was labelled as “cheap entertainment”.

Later, the video shows Salman Khan asking Rahul Vaidya to make Arshi chaat. He said that Arshi is very jealous and is unnecessarily sweet. Arshi also made a chaat for Rahul and claimed that he is not at all a good friend. They were once again seen indulging in a verbal spat. Rahul has ended his friendship with Arshi and said that she betrayed him..