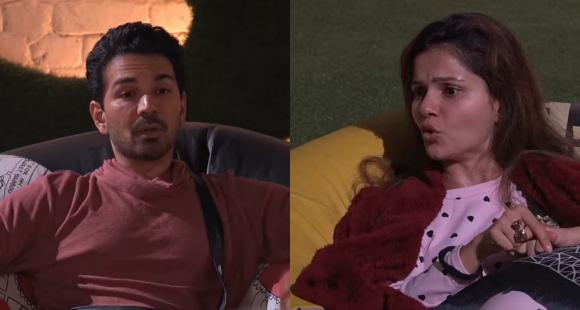 In last night’s episode of Bigg Boss 14, Rubina Dilaik took a jibe at Arshi Khan for continuously fighting with Rakhi Sawant. They got into an ugly spat when Rubina called Arshi ‘fake’. Rubina warned Arshi to not talk about her family and ‘aukat’. While the latter threatened to ruin Rubina’s career after the show, Arshi said that Rubina will not get any work after Bigg Boss and her pride for her work would get destroyed once the show gets over.

Later, during the day they again got into a war of words.  Rubina said that Arshi is a ‘joke’, while the latter said Rubina is an ‘insult’ in herself. Later, Nikki Tamboli went to Rubina and asked her if she is not happy with the fact that Arshi is continuously irritating her.

To which, Rubina said that Arshi is torturing her to the limits. Further, she explained how she is reacting every time when Arshi is picking up a fight. Soon, Rubina’s husband, Abhinav Shukla, who is also a contestant of BB 14, entered their conversation and asked Rubina to ‘stop being a cry baby.”

To which, an irritated Rubina replied, “I am a cry baby because I am unhappy.” She further stated that she doesn’t mind if she is looking like a cry baby. Abhinav then angrily replied to her and said, “Tum sunti nahi ho tumhara ye problem hai. Tumhe pata hi nahi hai kisse advice leni hai kisse nahi.(Your problem is that you don’t listen. And you don’t even know whose advice to take and whose not to.)”

Further, Rubina said that she will remain a cry baby as she cannot pretend and gets affected. Abhinav then advised her to ‘ease up a little.’