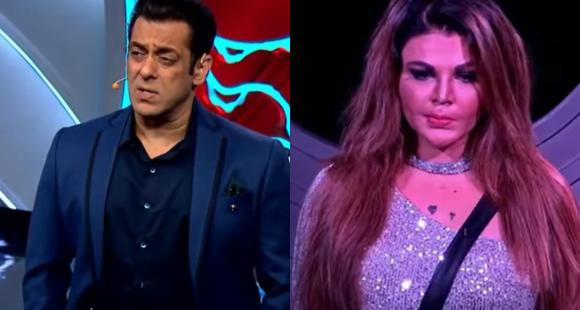 In the Weekend Ka Vaar Episode, Salman Khan will be seen lashing out at the housemates for their behaviour this week. He will also be seen reasoning with Rakhi Sawant and telling her if she cannot control herself, she can leave the show.

Bigg Boss 14 has seen an exciting week as a lot of equations got messed up inside the house. Things got extremely ugly between Rakhi Sawan and Rubina Dilaik & Abhinav Shukla and as a result, this Weekend Ka Vaar will see Salman Khan lashing out at housemates for this behaviour with each other inside the house. Not just this, Salman will school Rakhi and even ask her to leave the house after her actions inside the house in the name of “entertainment.’

In a promo of Weekend Ka Vaar, we get to see Salman, at first, yelling and screaming at housemates for their behaviour inside the house. He is seen using Nikki Tamboli’s words ‘Lokhandwala’ that she had used for Rakhi Sawant during their fight. Salman screams, “Lokhandwala, tum kaha se Chand se aye ho (Where have you come from, the moon)?” Post this, we hear Rahul Vaidya saying Sorry to Salman Khan. Later, Salman asks Rakhi to go into the theatre so that he could talk to her.

While talking to Rakhi, Salman tells her that he has always backed her up. However, in the name of entertainment, if she cannot stop herself from crossing a certain line, she can leave the house immediately. Salman goes ahead and asks Bigg Boss to open the door for Rakhi to leave. He is seen telling her, “Logo pe lanchan lagati ho, unke character pe sawal uthati ho. Maine Hamesha Aapko Support kiya hai. Lekin agar yeh entertainment hai, toh humko yeh entertainment chahiye hi nahi. Agar aap apne aapko line cross karne se nahi rok sakti, toh aap yeh show chod ke jaa sakti hai. Darwaza Khol Dijiye.(You accuse people, question their characters. I have always supported you. However, if this is entertainment, then we don’t want it. If you cannot stop yourself from crossing a line, then you can quit the show right now.)”

Seeing the door being opened, housemates including Nikki, Rahul and Aly Goni are shocked. While Rakhi intently stares at the door, it will be interesting to see if she walks of the house. To note, Rakhi picked on Abhinav twice this week and even got into a tiff with Rubina. She was also seen getting into a fight with Nikki Tamboli over makeup and kitchen work. Stay tuned to Pinkvilla for more updates.

Also Read|Bigg Boss 14: Devoleena’s BFF Rashmi on actress’ nasty fight with Arshi: Someone must have poked her a lot