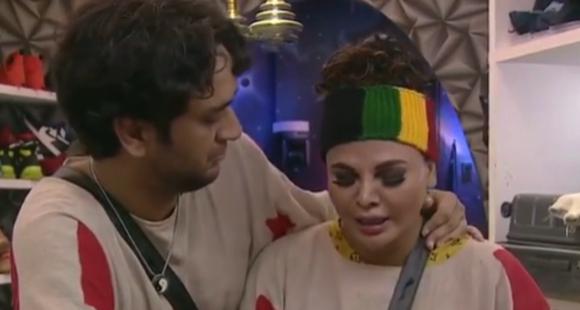 Vikas Gupta and Rakhi Sawant share a great bond inside the Bigg Boss 14 house. They have taken a stand for each other multiple times.

Vikas Gupta and Rakhi Sawant’s camaraderie inside the Bigg Boss 14 house is going great as can be seen in most of the episodes. The actress along with Arshi Khan broke down when Vikas had to exit the house owing to health issues. Now that he is back in the show, his fun and adorable banter with Rakhi has won hearts. Former Bigg Boss contestants Shefali Bagga and Dalljiet Kaur are all praises for Vikas owing to a recent gesture of his towards Rakhi.

After having re-entered the show, Vikas who is better known as mastermind gives a box full of jewellery to the actress. He also tells her that he brought the same as she was working hard for the show and that it’s visible to everyone. One could also see Rakhi getting emotional after having heard the words post which she hugs him. This sweet gesture of his has now earned him praise outside the BB house.

Not only did the fans of Vikas Gupta laud him for the same but also Shefali and Dalljiet who took to social media and opined about it. Meanwhile, multiple instances have proved Vikas and Rakhi’s bond. During the latest task, Vikas could be seen advising her at various levels. When Rakhi lost her coffee because of breaking rules, not only did he reprimand her for the same but also advised her to play the game wisely.

What are your thoughts about Vikas and Rakhi’s camaraderie? Do let us know in the comments section.