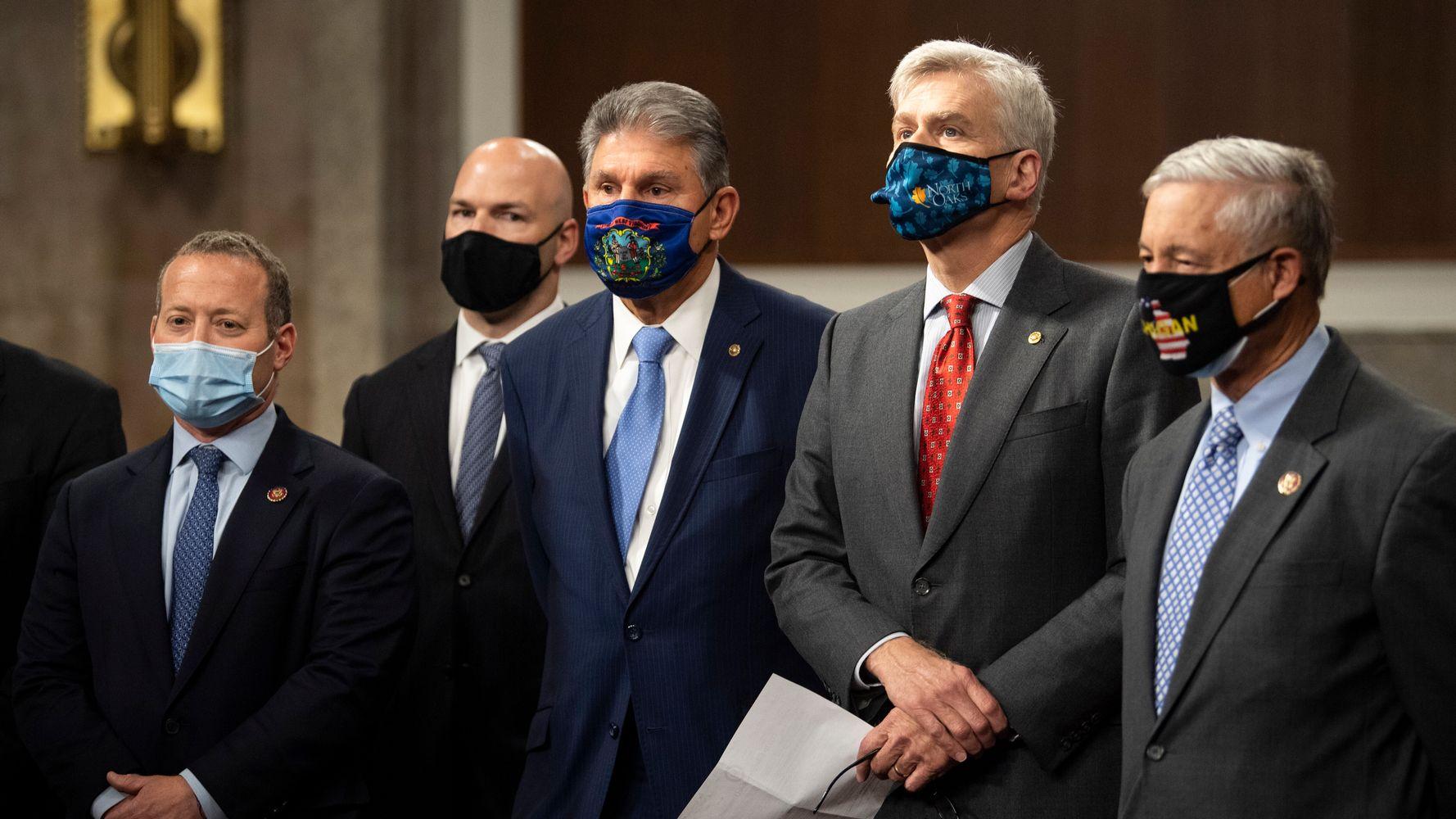 WASHINGTON ― A bipartisan group of senators finally unveiled their compromise proposal on Monday, offering additional relief to Americans struggling from the coronavirus pandemic. But just days before a key deadline, it remains unclear whether congressional leaders will accept the deal, take parts of it or reject it entirely.

The long-awaited bill is really split into two bills, as the dozen of centrist senators involved in drafting the measure struggled to reach agreement on two issues that have stalled negotiations between party leaders for months.

The first proposal includes largely noncontroversial items, like money for vaccine distribution, $300 billion more for a GOP-favored business loans program, and an extension of federal unemployment assistance — both for an additional 16 weeks and for an additional $300 a week for people on unemployment. The whole bill would cost $748 billion, much less than the $2.2 trillion legislation that House Democrats passed in October or the $3 trillion measure they passed in May.

The second proposal includes an additional $160 billion for state and local governments ― a key Democratic priority ― but it couples that Democratic win with a major Republican victory: a liability shield for businesses and other organizations that reopen during the pandemic.

The liability shield is still far from the language that Senate Majority Leader Mitch McConnell wanted. The Kentucky Republican has pushed for a four-year ban on all coronavirus lawsuits related to employers bringing their workers back. But his language was so broad that it also could have affected individual people’s ability to sue businesses, hospitals or other organizations that could say their operations were affected by the pandemic.

The compromise language doesn’t go quite as far. It would ban coronavirus-related lawsuits from December 2019 until one year after enactment of the law, or until the end of the public health emergency is declared. However, Sen. Joe Manchin (D-W.Va.) is the only Democratic member of the group who backed the proposal, reducing the likelihood that it makes it into the final bill.

Senators “couldn’t quite” agree on the liability portion, according to Sen. Angus King (I-Maine), one of the negotiators. And the bipartisan group seemed satisfied to let leaders decide.

It’s an open question which option congressional leaders will take — or whether they’ll take one at all.

“My hope is that our hard work will spur our leadership on both sides of the aisle… to take our products and use them as the basis for a COVID relief package that is urgently needed by our struggling families,” Sen. Susan Collins (R-Maine) said Monday, stressing that she supports both portions of the plan.

House Speaker Nancy Pelosi (D-Calif.) could decide to use the bipartisan bill as more of a menu, taking up pieces of the plan, leaving some out, and adding to it in places. She could then attach the pieces of her proposal to a large spending bill that must be law by the end of the week to avert a government shutdown. She could pass this package in the House, send lawmakers home, and leave it to the Senate to either accept the deal or shut down the government.

That would be the hardball approach, but it’s unlikely McConnell would just swallow a House-passed bill to keep the government running. Instead, he could try to pass proposals of his own and blame Democrats and the House for a shutdown.

The most likely path is still for Pelosi and McConnell to hammer out a deal, using the bipartisan deal as a framework.

But if leaders are only going to use the bipartisan bills as a template, then a deal might still prove elusive — even with a government funding deadline on Friday, and holiday jet fumes gathering.

McConnell warned in the spring of a “tidal wave of lawsuits” related to the coronavirus. That never happened.

Now Democrats are facing the prospect of having to leave out a major priority of theirs in a relief bill just because McConnell won’t move off of his original liability shield demands.

Democratic lawmakers indicated Monday that they aren’t quite ready to give up on state and local aid.

“I very much support state and local,” Pelosi said.

Senate Minority Leader Chuck Schumer (D-N.Y.) said that aid is “the right thing to do.”

Leaving out the state and local component, however, may be the key to a deal — as well as another potential relief deal in the early days of a Joe Biden administration.

Some Democrats have noted that another stimulus may be easier to do once Biden takes office if lawmakers leave themselves a compelling reason to act. But intentionally holding back on state and local aid now, with the idea that they can get more later, would be a potentially disastrous gambit that would leave states with massive shortfalls for the time being at best, and in perpetuity at worst.

Another issue for leaders to sort out is individual stimulus checks.

The bipartisan stimulus package does not include another round of direct payments to Americans, which could trip up negotiations before Friday’s government funding deadline. Sens. Bernie Sanders (I-Vt.) and Josh Hawley (R-Mo.) have both said Congress shouldn’t leave town for the holidays without providing a second wave of $1,200 checks to help working families. The idea has support from the White House but is opposed by many Senate Republicans, ostensibly due to its impact on the deficit, a concern they’ve rediscovered as of late.

Both Sanders and Hawley could slow the passage of a government funding bill if it does not include direct payments, so not including checks could cause a shutdown and imperil the larger deal.

At the same time, including checks could be a key to passage and the signature of the president.

For the moment, direct stimulus remains on the sidelines of a deal, but it could be one of the items Pelosi tries to add.

Any legislation that is going to make it to the president’s desk almost certainly needs the approval of both Pelosi and McConnell. Both have largely sat out negotiations to this point, letting the bipartisan group come to their own agreement, but it’s now incumbent on both of them to finish the deal.

McConnell has spent the last few weeks blaming Democrats for their supposed refusal to negotiate — even though, in reality, they’ve cut the overall cost of their demands in half and McConnell has kept up with his insistence on the divisive liability shield.

But on Monday, McConnell said the fate of a deal is in the hands of Congress, and claimed Republicans want a compromise.

“I can speak for the Republican side. We want to make a law,” he said.