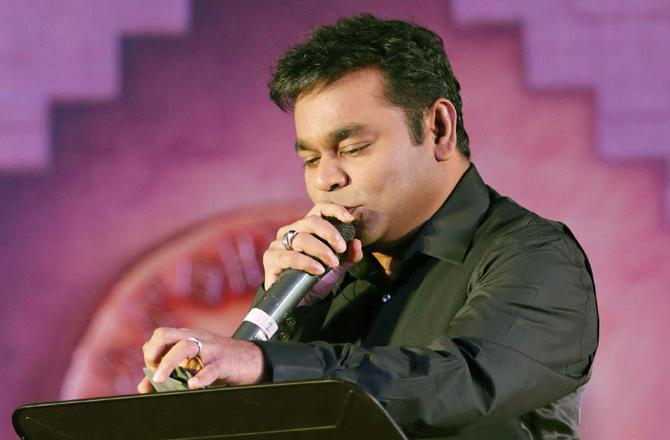 To write something about the genius of A.R. Rahman is tricky. The maverick composer has helmed some of the greatest melodies of Indian Cinema, and to talk about his body of work would require multiple articles and stories. It would be fitting to revisit his personal favourite songs from some very influential and even not-so-great films.

Ram Gopal Varma attempting a love triangle itself makes the film exciting. Aamir Khan headlining it makes it even more interesting. Munna, played by Khan, loves Mili, played by Urmila Matondkar. He’s drunk and randomly decides to start dancing on the street, with a deep passion for his love. A great joke about ‘whenever you decide to dance alone on the street, everyone you meet will know the step’ perfectly fits here in Rahman’s pulsating track choreographed imaginatively.

This song comes multiple times in the film, the best one is saved for the interval point, where the conflict between Manav (Akshaye Khanna) and Mansi (Aishwarya Rai Bachchan) is birthed. Enters Anil Kapoor, a happy-go-lucky and no-nonsense music baron Vikrant, known for his eccentricities and effortlessness. Mansi sees him from afar, and the film breaks into the interval. Even before the second half begins, we know Mansi’s transformation has begun. And Rahman fuels the track to instill excitement among the viewers about what will happen to her from this point.

Everything has finally fallen into place for the underdog Cricket team of the fictional village of Champaner. Bhuvan has found his 10 players who’ll battle it out with the British on the cricket field. The stunning track sees all the actors and their rigorous training and moment of fury. They sing, dance, practice, and show how they are prepared to escape from the clutches of Lagaan.

In what was Rahman’s maiden collaboration with Yash Raj, Saathiya gave us what is arguably one of the most haunting title songs of the last two decades. The meticulousness of the composer nicely married the aesthetics of the production house. Sonu Nigam’s melancholic voice-powered this track gorgeously filled in the luscious landscapes with Vivek Oberoi and Rani Mukerji.

Ashutosh Gowariker’s Swades knew how to be patriotic without wearing patriotism on its sleeves. Shah Rukh Khan played Mohan Bhargava, a NASA scientist who relocates to India and rediscovers his roots. The transformation is slow and organic, and once he’s back to the U.S.A., the track, sung by Rahman himself, reminds him of the time he’s spent in India. Has there been a more scintillating ode to one’s roots? The nation wants to know.

Mani Ratnam and A.R. Rahman are a twain met and made in heaven. The filmmaker refuses to opt for any alternate choice and neither he’s interested. In Yuva, a political drama that deals with both love and lust, Ajay Devgn’s Michael gets a solid introduction as this pulsating song plays in the background. It establishes his character, his ideology, and his story. Devgn has always been lucky with his entrances, be it on two bikes in Phool Aur Kaante, or just one in Yuva.

Ashutosh Gowariker got the genre of historicals right with Jodha Akbar, a grand and epic saga of passionate romance. Hrithik Roshan and Aishwarya Rai Bachchan looked their parts with exquisite costumes and effervescent performances. And at the heart of this saga was the music by Rahman, particularly this love ballad filmed with precision by the filmmaker.

The film may have been a misfire but Subhash Ghai did succeed in giving this Broadway-style musical something to rave about. Ghai attempted a Symphony-like family drama with gargantuan sets and even bigger musical set-pieces. This was one of the tracks, with multiple instruments and at the centre, the blooming romance of Salman Khan and Katrina Kaif. This was perhaps the only redeeming quality of Yuvvraaj, with Rahman’s assistance.

Imtiaz Ali and A.R. Rahman teamed up for the first time for this musical. Ranbir Kapoor played a college slacker who aspires to be a musician but must get his heartbroken in his journey from ebb to rise. He does, and once he achieves what he aspires for, the expected emptiness crept in. This heartbreaking melody was kept for the last, when Janardhan has become Jordan, but one part of his heart is still Janardhan, with his Heer, whom he sees (imagines) and the screen goes blank. What a stunning end!

Imtiaz Ali loves people who are lost in their lives and he enjoys making them discover themselves. Ved from Tamasha was one such man, who yearns to be Don but isn’t aware of his mundaneness. A monologue by an ageing storyteller changes everything, and when Lucky Ali’s sung Safarnama, we enjoy his transformation as much as he does. And we know the next step would be Tara, the shining star of his life. Nobody can ask for a brighter ending than this.

The tagline of Rang De Basanti read- “This Republic Day, a generation awakens.” We have been making films that put a crucial and critical gaze at the system but few of them reached were Rang De Basanti did, and a lot of credit for that goes to Rahman’s understanding of music and the film it’s a part of. In Khoon Chala, all the friends unite for a candle March and protest for their friend’s unfair death. It’s chocking, both the audio and the visual. It’s one of Rahman’s best.