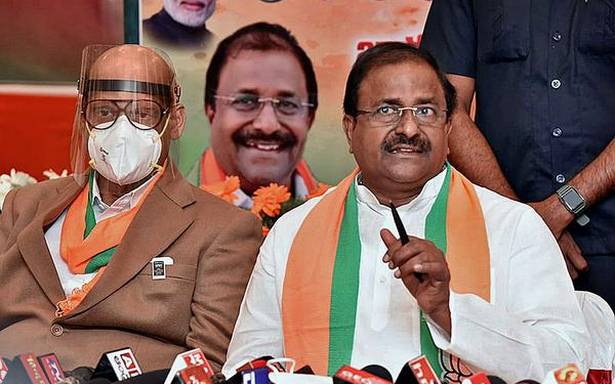 BJP State president Somu Veerraju has demanded the release of a White Paper on irrigation projects in Rayalaseema.

Addressing the media along with party Rajya Sabha member T.G. Venkatesh and State general secretary S. Vishnuvardhan Reddy here on Saturday, Mr. Veerraju alleged that all the Chief Ministers of the State, whether from the Congress, the TDP, or the YSRCP, had concentrated on improving their personal wealth, but showed utter neglect towards developing resources in the region.

He demanded that Chief Minister Y.S. Jagan Mohan Reddy allocate ₹10,000 crore for the irrigation projects in Rayalaseema and complete them in the next three years.

“If the BJP comes to power in A.P., it will concentrate on comprehensive development of the region and allocate ₹20,000 crore for the projects and complete them in all aspects,” Mr. Veerraju said.

He said the BJP, which had released the Rayalaseema Declaration, was firm on fulfilling its commitment.

The BJP government at the Centre had sanctioned several educational and other institutions such as the DRDO at a cost of ₹0,000 crore, Orvakal airport, and IIITDM, some of them in Kurnool district, he said.

He sought a referendum, or eliciting of public opinion, on the Capital issue, for the construction of which the Centre had given ₹7,200 crore.

“Why the Sri Bagh Pact has not been implemented for the development of the Rayalaseema region has to be found out,” he said.

Later, Mr. Veerraju visited Mantralayam to inspect the pushkar ghats in which large-scale corruption was said to have taken place. He also offered prayers at the Raghavendra Swamy temple.

Visiting the Tungabhadra Pushkar Ghat near Ramapuram village, the home town of Mantralayam MLA Y. Bala Nagireddy, he alleged that quality was compromised.