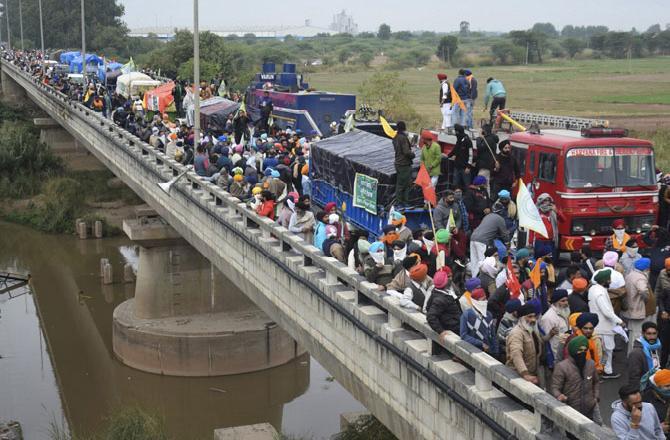 The Congress on Thursday slammed the government for using excessive force to stop the farmers from marching towards Delhi to protest against the recently enacted farm laws, saying the present BJP government is hell-bent on suppressing the genuine demands and concerns of the farmers.

“On the eve of Constitution day, farmers have been stopped from entering Delhi, even by using force at some places. Does the Constitution not guarantee rights for our farmers? Has the BJP government reserved the rights only for its privileged friends,” asked Congress spokesperson Gourav Vallabh.

Addressing a press conference on Thursday, Vallabh said the BJP government is mortgaging the farmers’ rights to its corporate friends. The Congress posed three questions — Whom has this government sworn in to protect? Does it only value its rich corporate friends? Why does it choose to so conveniently ignore the sweat and tears of our farmers?

The Congress also said that Thursday will be remembered as a Black Day due to several reasons. “It is highly unfortunate and denigrating that the present government is dedicated to only protecting the rights of a few, as around 62 crore farmers and 250 farmers’ bodies from all over the country are protesting against the draconian farm laws,” Vallabh said.

The BJP government had promised to double farmers’ income by 2022. But the fact remains that the situation of the farmers has worsened in BJP’s tenure, with agricultural income falling to a 14-year low in 2018-19 and agricultural produce witnessing the worst price slump in 18 years the same year, the Congress said.

Abolishing the system of Agricultural Produce Market Committee (APMC) will totally destroy the procurement system, the Congress alleged. In such a scenario, the farmers will neither get the MSP, nor the right rates for their crops as per the market price.

As per the Agriculture Census of 2015-16, in India, the average land holding is 2 acres or less than that. With such low land holding by the farmers, how does the government expect them to understand, structure and negotiate contracts with big corporate houses, Vallabh asked.