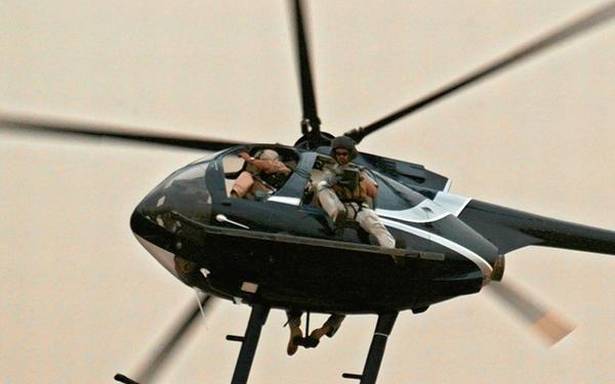 Despite convictions and controversies, the security firm remains powerful in U.S.

Blackwater Worldwide, the Virginia-based private security firm, whose four convicted contractors were last week granted clemency by President Donald Trump, is arguably the most high-profile embodiment of what is described as the outsourcing of warfare by successive U.S. administrations. Contracted by the State Department to protect American diplomats, the firm, since renamed Xe Services and more recently as Academi, has seized on the new avenues thrown open by the global war on terror following the September 11, 2001 attacks and snapped up security deals. It has in the process acquired increasing notoriety for contempt for the rule of law and violations of human rights.

The 2007 Baghdad massacre of 17 civilians for which these former U.S. service members were pardoned by President Donald Trump, is one of many instances that Blackwater has been criminally implicated. Months before the notorious killings, one of its employees fatally shot a bodyguard of a top Iraqi politician, leading to his dismissal. Families of four Blackwater employees killed in Falluja in 2004 sued the firm for wrongful deaths. In 2018, under former chairman Erik Prince, Blackwater was manoeuvring hard to privatise Washington’s war effort in Afghanistan as a third option between a prolonged U.S. military presence and complete withdrawal of troops.

A UN investigation this year revealed that Mr. Prince equipped Crown Prince Mohammed bin Zayed, the de facto ruler of the UAE with private militia. The UN has also linked Blackwater’s involvement in another botched mercenary mission in Libya. Nearer home, there have been reports that Mr. Prince, a close ally of President Trump, and the brother of U.S. Education Secretary Betsy DeVos, was recruiting former spies to infiltrate the Democratic campaign and politically liberal organisations opposed to the Trump agenda. Mr. Prince, whose clandestine operations span several continents, has all along denied any wrong-doing by the security firm.

In a 2007 testimony to a House oversight committee relating to the gruesome shootings of unarmed civilians in the Iraqi capital, Mr. Prince alleged that judgment was being pronounced based on inaccurate information. Instead, he insisted that the legal immunity from prosecution of contractors should be protected because a fair trial for foreigners was highly unlikely in the country. Henry Waxman, a democratic legislator and chairman of the House oversight committee, and another Republican member criticised the State Department’s failure to enforce accountability on Blackwater.

In October the same year, Mr. Waxman, based on an Internal Revenue Service ruling, accused Blackwater of evading millions of dollars in federal taxes. The agency had found that the company’s designation of its personnel as independent contractors rather than an employee as was the practice in other security firms, lacked merit. Blackwater’s defence was that the arrangement gave flexibility to the relationship between the company and its workers.

While the Iraqi government tried to ban Blackwater from the country, the State Department in 2008 renewed the company’s contract, even as the latter managed to stall an inquiry into the 2007 killings of civilians. In further demonstration of its increasing clout, the Pentagon invited Blackwater to bid for lucrative security contracts worth billions of dollars, this time to combat terrorists with links to the drug mafias in Mexico, Bolivia and Colombia. In August 2009, it emerged that the CIA had, at a cost of millions of dollars, hired the firm for its secret operation to trace and assassinate al-Qaeda terrorists, but with little to show for its activities.

Ironically, the tide began to turn against Blackwater after the 2009 dismissal of charges against the company in a U.S. court. In response, Jo Biden, then Vice-President in the Obama administration, promised to reopen the trial. The protracted process that followed in the next decade resulted in the more recent convictions and the relentless pursuit to exonerate them, culminating in last week’s clemency. The new administration’s dealings with Blackwater is sure to attract closer Congressional scrutiny.