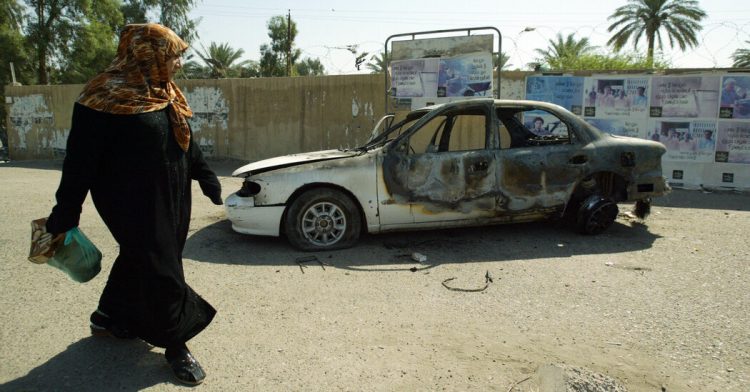 BAGHDAD, Iraq — Haider Ahmed Rabia was stuck in traffic in Baghdad 13 years ago when guards with the American security contractor Blackwater opened fire with machine guns and grenade launchers, killing or wounding at least 31 Iraqi civilians. He still carries some of those bullets in his legs.

In 2014, he was one of the survivors and family members who flew to the United States to testify in the trial of four of those Blackwater guards, told that the evidence of his injury and his account of that deadly day could help bring justice.

“I went to America and saw the killers walking free, wearing suits,” he said in an interview in Baghdad on Wednesday. “I said, ‘Tomorrow I will return to my country, but will these killers face justice?’”

“Today,” he added, “they proved to me it was just theater.”

He was speaking of President Trump’s pardon this week of those four former Blackwater security contractors, who were convicted in 2014 in what a U.S. court determined were unprovoked shootings in Nisour Square.

The killings cast a harsh spotlight on how heavily armed American security contractors were acting with impunity after the U.S. invasion of Iraq, angering Iraqi officials whose own investigation also found no evidence to support Blackwater’s claims that the convoy had come under fire first.

It was the first time that many Americans began coming to grips with the growing role that Blackwater — founded by Erik D. Prince, a former Navy SEAL member and future ally of President Trump — was taking in the sprawling U.S. war on terrorism, winning billions of dollars in contracts as the firm racked up accusations of abuses with few consequences.

An already tense relationship between the United States and Iraq grew more bitter. And the backlash over the killings played a role in helping to speed the withdrawal of U.S. forces from Iraq in 2011, after Iraqi political leaders rejected American demands for immunity for all U.S. troops.

On Wednesday, Iraq’s foreign ministry urged the U.S. government to reconsider the decision to pardon the four former Blackwater guards, saying in a statement that the move was inconsistent with the U.S. administration’s “declared commitment to the values of human rights, justice and the rule of law.”

The investigation was one of the most logistically and legally difficult ones in recent Justice Department history, according to former department officials who worked directly on the case.

“We had never done anything like this before,” said Ronald C. Machen, the United States attorney for the District of Columbia at the time and the official who oversaw the case. “We had to send teams of F.B.I. agents and prosecutors over there to build the case from the ground up — they had to risk their lives to collect the evidence. We had to persuade Iraqis who lost loved ones to come over to testify.”

“And to think it all gets thrown away,” he added.

Amy Jeffress, a top national security prosecutor at the Justice Department who oversaw the case, said the pardons would have a lasting impact on the perception of the United States abroad. “These pardons send a terrible message to the Department of Justice and to our Iraqi partners who helped with this very difficult case — and of course to the victims,” she said.

The events in Nisour Square on Sept. 16, 2007, began with an explosion somewhere else: a roadside bomb detonating a few hundred yards from a heavily guarded compound where officials from the United States Agency for International Development were meeting.

In a city where security contractors referred to almost all of Baghdad as a high-risk “red zone,” Blackwater guards in armored vehicles stopped traffic in the square, a busy intersection about a mile away from the blast, to evacuate the American officials to Saddam Hussein’s former palace compound where the United States was based.

The Blackwater guards said they believed they came under fire first, though both Iraqi and U.S. investigations rejected their accounts. Other testimony indicated that an initial shot by a Blackwater guard killed a driver whose car kept rolling. That prompted a volley of machine gun fire and rocket-propelled grenades from the security contractors, who stopped only after 17 civilians were dead.

More than 30 Iraqi witnesses traveled to the United States in what was described by justice officials as the largest number of foreign citizens to testify at a U.S. criminal trial.

During the trial, survivors described the chaos and horror of seeing family members killed as bullets and grenades ripped through the thin metal of cheap cars. One father, Mohammed Hafedh Abdulrazzaq Kinani, sobbed uncontrollably as he testified about the death of his 9-year-old son, Ali.

A medical student, Ahmed Haithem Ahmed, and his mother, Mohassin Kathim, were the first to be killed, on an errand as their vehicle approached the square. Mr. Ahmed was shot in the head, and Ms. Kathim cradled his body, crying for help. The guards kept firing — round after round, and then an incendiary device, killing her as well.

Mr. Ahmed’s father later counted 40 bullet holes in the wreckage of the vehicle.

Four former Blackwater guards, Nicholas A. Slatten, Paul A. Slough, Evan S. Liberty and Dustin L. Heard, were convicted by a federal jury in 2014. Although 17 Iraqis were killed, the men were charged in 14 of the deaths that the F.B.I. found violated rules for deadly use of force.

Mr. Slatten, a former Army sniper who was accused of firing the first shots, was convicted of murder and given a life sentence, while the three others were sentenced to 30 years in prison on manslaughter and weapons charges. In 2019, those three men’s prison terms were cut roughly in half after a previous court ruling vacated the original sentencing.

For some survivors of the attack, President Trump’s pardon of the Blackwater contractors was a bitter reminder of what Iraqis have always viewed as a lack of concern over Iraqi lives.

Mr. Rabia, who is now 45 and works as an electricity ministry employee, still struggles with nerve damage in his legs.

He was driving his taxi in Nisour Square when the Blackwater convoy came through. It was four years after the U.S. invasion toppled Saddam Hussein. The country had fallen into a brutal civil war, and in the capital, U.S. forces and security contractors ruled the roads. Some vehicles carried signs with stark warnings: “Stay back 100 meters or you will be shot.”

Mr. Rabia said that Iraqi drivers were stuck, waiting for the Blackwater convoy to pass, when the contractors began opening up with their weapons. He was hit as he scrambled to crawl over to the passenger side of the taxi to escape.

President Trump has discussed potential pardons that could test the boundaries of his constitutional power to nullify criminal liability. Here’s some clarity on his ability to pardon.

Another survivor, Jasim Mohammad al-Nasrawi, 41, was shot in the head. He survived after Sahib Fakhir picked him up and threw him into his own car as he rushed his wounded son to the hospital. Mr. Fakhir’s son, Mahdi Sahib, 23, died on arrival.

“I was surprised by their pardon,” said Mr. al-Nasrawi, who had been driving through Nisour Square on his way to deliver mail. “This is an act of terrorism. Where are the human rights by Trump and the killers?”

The name Blackwater — the firm founded by Mr. Prince, the brother of Education Secretary Betsy DeVos, and built up with the help of former C.I.A. officials — has become synonymous with what Iraqis remember as the Nisour Square massacre. Mr. Prince renamed the firm and sold it in 2010, after which it was renamed again, to Academi.

But there is no visible trace in Nisour Square today of the 2007 killing. Young Iraqis take selfies in front a bronze statue of the stylized eagles the square is named after, while traffic moves past lighted billboards advertising household appliances and phone companies.

Saad Eskander, a historian and the former head of Iraq’s national archives, said that for many Iraqis, the Nisour Square killings are seen as simply another troubling chapter, a cause for continued distrust of Americans, in a book of trauma that is still being written.

“Iraq has witnessed a lot of sad events through the last four decades when the Iran-Iraq war broke out,” he said.

Still, the pardon has opened some old wounds, and has refreshed calls for Iraq to further distance itself from the United States.

One of the biggest Iranian-backed militias in Iraq, Kataib Hezbollah, demanded that U.S. forces leave Iraq to prevent crimes such as the killings in Nisour Square from being committed again.

“The criminal Trump intentionally pardoned a group of mercenaries of the terrorist company responsible for the massacre in Nisour Square,” the group said in a statement. “This arbitrary and unjust measure confirms the extent of American hostility to the Iraqi people.”

“The fact is they were not punished because they killed Iraqis,” he said. “They were punished for violating the American rules of engagement.”

Ali al-Bayati, a member of Iraq’s human rights commission, said the pardons were an indication that no country is serious about prosecuting war crimes.