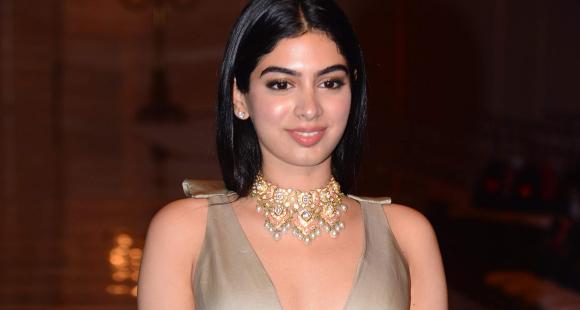 Boney Kapoor’s daughter Khushi Kapoor will be the next star kid in the block who will be making her Bollywood debut. While the producer has confirmed she will be following her mother and sister’s footsteps, Boney clarified that he will not launch her.

Boney Kapoor and late Sridevi”s younger daughter Khushi Kapoor will be seen on a poster soon as she prepares to make her Bollywood debut. The aspiring actress is yet to reveal details of her debut project. However, her father has spilt the beans to confirm that she will be following her sister Janhvi Kapoor’s footsteps into the industry. In an interview with ETimes, Boney revealed Khushi is keen on pursuing a career in acting. “You will hear an announcement soon,” he teased.

While fans would be eager to see Khushi work her magic on the big screen, Boney clarified that he will not launch Khushi. He added that Khushi’s grand launch will be done by another popular production house. “I have the resources, but I would rather have someone else launch her because I am her father and one tends to get indulgent. You can’t afford to do that as a filmmaker and nor is it good for the actor. Anil (brother Anil Kapoor) was still an established actor, so it didn’t affect him much, but I think I became an indulgent brother with Sanjay (Sanjay Kapoor) when he made his entry into films,” he said.

Reflecting upon launching brother Sanjay Kapoor in 1995 release Prem, Boney expressed that he feels it might have gone against Sanjay. Nevertheless, Boney applauded Sanjay’s work in the OTT space. “He’s playing interesting characters that he truly deserves to portray and can do justice to. Likewise, I would want Khushi to find her own footing. She will be launched by someone I respect and someone I feel secure and safe about,” the producer said.

As for Khushi, she already enjoys a massive fan following on social media. Khushi recently made her Instagram account public and since then she has been treating her fans with some stunning pictures and videos which are high on glam and fashion.