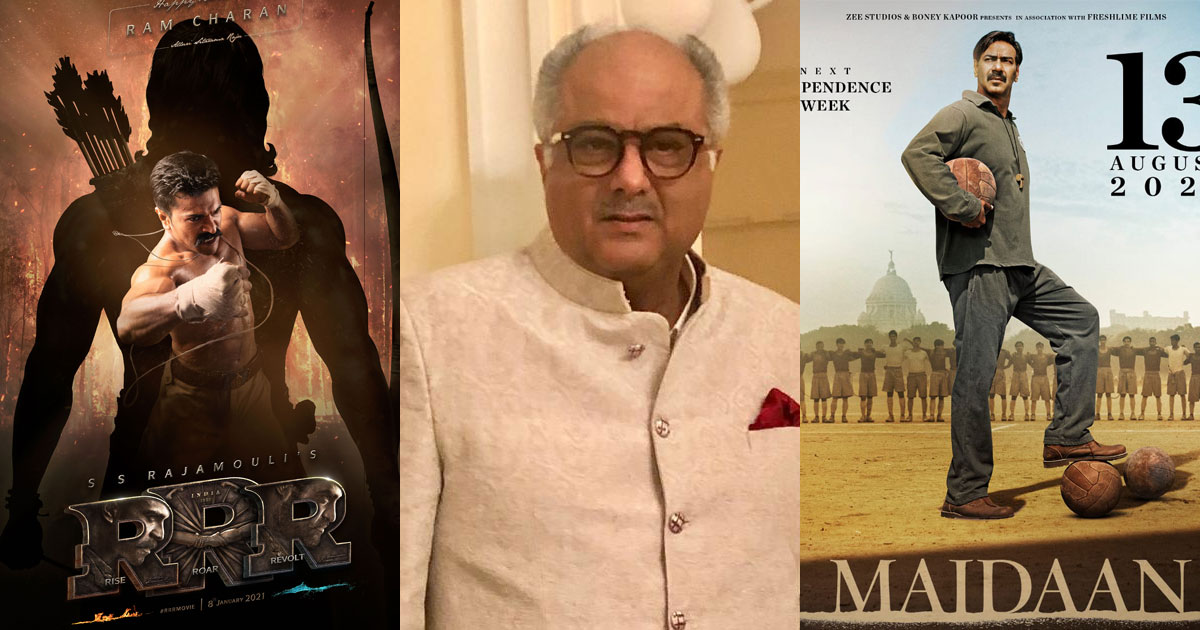 Yesterday, the team behind SS Rajamouli’s RRR revealed that magnum opus would be releasing in cinemas on October 13. While fans are excited to see this multi-starrer in theatres during Dussehra 2021, Boney Kapoor, the producers of Ajay Devgn’s sports biopic, Maidaan isn’t.

For those who do not know, over 6 months ago the makers of the biopic film (on the life of football legend Syed Abdul Rahim) announced that the Devgn starrer would hit cinemas in the Dussehra week. Scroll down to see what Kapoor has to say about Rajamouli releasing his film at the same time.

As reported by Bollywood Hungama, a source revealed that Ajay Devgn had asked SS Rajamouli to speak to Boney Kapoor before announcing RRR’s release date. For the unversed, Ajay plays the lead in the biopic film and a pivotal part in the period drama. The insider said, “Ajay is aware that his prestigious bio-pic Maidaan on football legend Syed Abdul Rahim was due in the Dussehra week this year. He very specifically told Rajamouli to speak to Boney Kapoor before announcing his release date. But Rajamouli went ahead without consulting Boney.”

And now Boney Kapoor has expressed that he is not happy with what happened. The above-mentioned site reported the producer saying, “Of course I am upset! This is most unethical. I announced my release date for Maidaan six months ago. At a time when we should all be coming together to save the movie industry, he (Rajamouli) has gone and done this.”

SS Rajamouli’s RRR stars Ram Charan, Jr NTR, Alia Bhatt, Olivia Morris, Ajay Devgn, and Samuthirakani. The fictional story set in the 1920s and is reportedly based on the lives of two real heroes. The film will release in Hindi, Kannada, Malayalam and Tamil.

Maidaan is helmed by Amit Sharma and co-produced by Boney Kapoor and Zee Studios. The film is inspired by the Indian national football team coach and manager Syed Abdul Rahim. Rahim is regarded as the architect of Indian football.

Must Read: When A Struggling Vidhu Vinod Chopra Found His Saviour In LK Advani In The Late 70s

Back to Top
Close Add post
X
Varun Dhawan-Natasha Dalal wedding: Manish Malhotra shares a beautiful video of dressing up the groo…BollywoodVarun Dhawan and Natasha Dalal tied the knot on January 24, 2020 at a five-star hotel in Alibaug. It was a very intimate wedding. The only people from…

Boney Kapoor Upset With SS Rajamouli For Clashing RRR With Maidaan: “This Is Most Unethical”