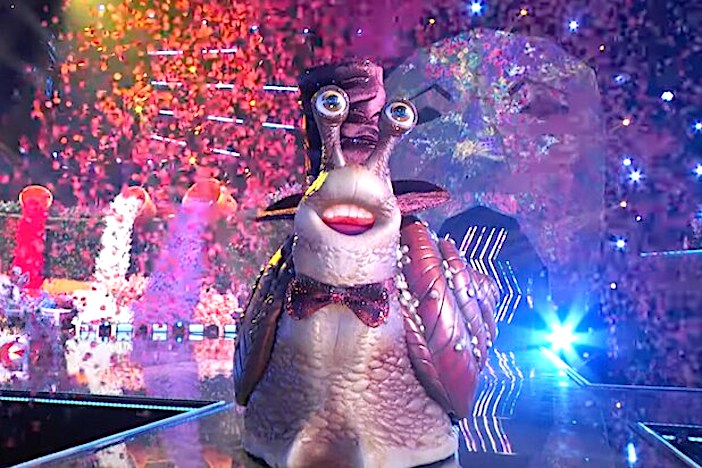 If you’ve been long fantasizing of a Muppet Show/Masked Singer crossover… well, Kermit the Frog just made your dreams come true. Because on Wednesday’s The Masked Singer Season 5 premiere, the famous felt amphibian warbled Hall & Oates’s “You Make My Dreams Come True.” While disguised as a giant, top-hatted snail. Yep, that actually happened. And it was <wildly flailing Kermit arms> amazing.

Fox had been promising that this would be a “game-changing season” of the celebrity cosplaying competition, and this was certainly the series’ most brain-breaking and possibly internet-breaking unmasking (as well as the cutest). And I am stating this as someone who has watched every single episode of both The Masked Singer U.S. and U.K., and as someone who’s still processing that bizarre night almost exactly one year ago, on March 11, 2020, when Sarah Palin performed a bachelorette-party-style rap of “Baby Got Back” dressed as a Care Bear furry. (As a hot-take Esquire essay titled “I Did Not Expect Doomsday to Be This Tacky” noted, this was not the most bonkers or bold-font headline of that evening. But it certainly helped set the tone for the crazy year to come.)

However, while Palin’s Masked Singer reveal last year was controversial and possibly apocalyptic, this Wednesday, when guest host Niecy Nash removed the Snail’s stovepipe chapeau and Kermit’s adorable little green noggin popped out of a foxhole in the costume’s back, viewers were united in their excitement and delight over this meta, puppet-within-a-puppet, Russian-doll-like moment. (There was a pair of decidedly less adorable actual Russian Dolls who also performed on Wednesday’s premiere, but I’ll get to them later.) Judge Ken Jeong even declared Kermit the “most famous guest ever” to compete on the show, and — sorry Lil Wayne, Dionne Warwick, Gladys Knight, Patti LaBelle, Tony Hawk, et al — Ken wasn’t wrong. Kermit is an icon… and, as it turns out, he’s not a bad Daryl Hall impressionist either.

Sadly, while Kermit the Snail gave a charming and not-at-all-sluggish performance, as he told Niecy: “It’s not easy being green, but sometimes it’s even harder being a snail!” And so, the beloved Muppet was the first eliminated contestant of Season 5’s Group A cast of characters — “the first to go home, but the one we’ll never forget,” as judge Jenny McCarthy-Wahlberg fondly declared. (Let’s hope that Animal will compete in the Group B bracket in a couple weeks’ time.) However, Kermit’s performance wasn’t the only surreal moment of this “game-changing season.” And some of what went down could make your nightmares come true.

We met a new cast member: a secret-agent clue-hacking chicken named (of course) Cluedle Doo. We met a cyborg porcupine with a bionic knee and radioactive laser-eye. We met a screaming raccoon in Village People drag who may or may not be Gary Busey. And we found out that several surprise “wildcard” contestants will bumrush the show all season long, only compounding the chaos. (I additionally hope that one of those wildcards is Beaker, Dr. Teeth, or the Swedish Chef.) And, as mentioned above, we met a new host, Niecy Nash, filling in for Nick Cannon, who had to miss Season 5’s first few episodes after testing positive for COVID-19 (and unfortunately miss out on the opportunity of a lifetime to share the stage with a Muppet.)

So, it’s time to play the music. It’s time to light the lights. Let’s check out the surviving singers of Wednesday’s Group A round, and let the guessing game begin again:

The Russian Dolls, “Man in the Mirror”

Last season, The Masked Singer featured its first duo, the Snow Owls. This season, the Russian Dolls turned to the Snow Owls and said, “Hold my [MMMHops] beer.” What at first appeared to be just one giant Weeble Wobble who sounds exactly like Michael Jackson turned out to be two (or maybe even three!) mirror-image Weeble Wobbles who sound exactly like Michael Jackson. “I’m confused!” hollered Jenny, speaking for all of America. “That was so creepy, but so magical!” exclaimed judge Nicole Scherzinger.

Clues: Visual clues included coffee creamer, a “Mizfitz Toy Store,” puppet strings, the Garden State Highway, a train, a wooden boat wheel, and breadsticks. (Note: Breadsticks was the name of the restaurant on Glee.) The Russian Dolls “used to be the world’s hottest toy” and people “tried to put them in a box,” so now they’ve been “doing their own thing for quite some time.”

My guess: OK guys, this is Hanson. Since outgrowing their teen heartthrob days, they’ve been recording on their indie label 3CG Records, and anyone who’s ever listened to “MMMBop” knows the brothers can pull off those Jackson 5-style harmonies. And there’s enough room for both Isaac and Taylor in that larger doll!

The Seashell, “Listen to Your Heart”

This lovey sea creature was a bit nervous at first, but then she really came out of her shell! Clearly, she has sung professionally before — albeit, by her own admission, not very recently. She did the late Marie Fredriksson proud with this Roxette power ballad. And to loosely quote another Roxette hit, she had the look: So far, this is one of the prettiest, most straight-out-of-a-fairytale costumes of the season.

Clues: We saw a hot dog with relish, a chameleon, a witch’s broom, a liberty bell, and a cowboy hat. She said she was “pulled all around the tide with her family” as a child, and “never felt grounded,” but then finally experienced a “massive tsunami of success.” She did confess that she used to sing “waaaaay back in day,” but she put music aside to pursue other career goals.

My guess: Keeping with the sibling theme, I am getting Tia and/or Tamera Mowry vibes here. Both Sister, Sister and Twitches stars were in a ‘90s singing group called Voices, so the clues add up.

In another hold-my-beer Season 5 moment, this wild-eyed wild-west trash-rocker made last season’s loose-lipped performance by Wendy “The Lips” Williams seem positively sedate and totally in tune. And this was the most punk-rock Masked moment since Mickey “The Gremlin” O’Rourke paid tribute to Willy DeVille and then ripped off his own head. The Raccoon screamed like bowlegged banshee throughout the Troggs’ three-chord proto-punk garage classic, and, as Jenny put it, “committed like no other.” Judge Robin Thicke said, “I loved it, because he didn’t follow the script, so you’re on the edge of your seat. That’s entertainment at its finest!” It was certainly entertainment at its freakiest.

Clues: He “went through hell” and in his “darkest days faced death,” but when he got a “second chance” at life, he “promised to do good.” He described himself as some of sort of Quasimodo-esque “monster” (The Hunchback of Notre Dame is his favorite book), and jail-cell vignettes implied that he has a criminal past.

My guess: I have a hunch (pun intended) that this is the Pet Judge himself, Gary Busey. Gary apparently did all of his own singing when he starred in The Buddy Holly Story (a breakout performance that earned him an Oscar nomination), so maybe he’s disguising his voice — or maybe this was his real voice all along.

The Robopine, “Never Too Much”

This is a game-changing season, so this prickly creature decided to change his name from “The Porcupine” to “The Robopine” right in the moment. (Hey, this was far from the strangest thing that happened on Wednesday’s big premiere!) The new name did suit him better, because he was rocking a cool one-eyed cyberpunk look that made me think he might sing Billy Idol’s “Shock to the System.” Instead, he shocked everyone with a smooth Luther Vandross homage and a voice that Nicole swooningly described as “silky, yummy, butter.”

Clues: He had a tough upbringing (possibly in Washington D.C. or Washington state), but after he got a random call from an “angel” who said “hello,” his career finally took off. And he’s still going strong: “My kids and my grandkids told me I was supposed to hang it up a long time ago,” he said, revealing that he’s 60 years old. But the Robopine moved like such a well-oiled groove machine that the judges automatically assumed he was lying about his advanced age.

My guess: This one has me stumped. It ain’t Billy Idol. I’m tentatively going with Eddie Murphy, who actually does turn 60 this year and enjoyed a short-lived but stellar ’80s funk-pop career thanks to the Rick James-produced banger “Party All the Time.” But if this is Eddie, I just wish he was wearing a Gumby costume instead.