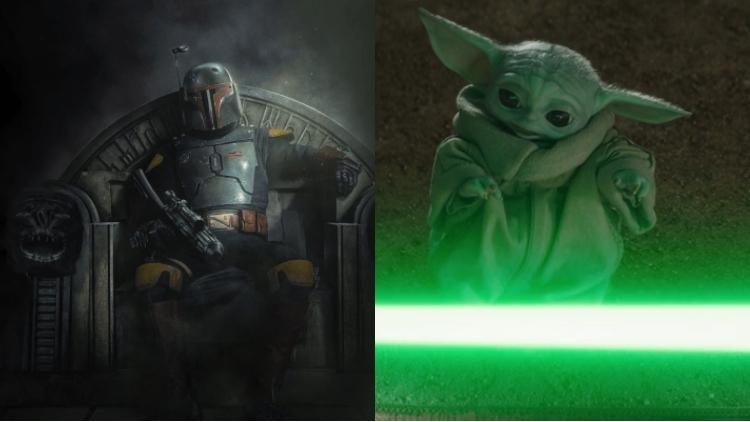 The awaited 6th Episode of Book of Boba Fett is finally out. And we see many more returning characters this episode, from both The Mandalorian and Star Wars: The Clone Wars.

The episode kicks off with a scene of Pyke Syndicate members making a Spice Deal when they interrupted by a known figure. Cobb Vanth, the Marshall of Mos Pelgo from who made his first appearance in The Mandalorian. The Marshall thwarts the Pyke’s deal by killing everyone but one Pyke.

Attachments of a Mandalorian

After the title scene, we see Din Djarin, The Mandalorian make a trip to a tropical planet. Upon landing, he is greeted by R2D2, the Mandalorian explains that he wishes to see Luke Skywalker and Grogu. So R2 takes him to an unfinished building. The Mandalorian waits for Skywalker to show up.

In another scene, we see Luke and Grogu training together. Grogu, being a cute glutton as always gets distracted by the frogs. To which Luke astonishes him by lifting a bunch of frogs from the nearby pond. Luke asks Grogu to remember his old home and even helps him to remember using the force. Grogu ends up seeing visions of the Jedi being Massacred during the Order 66 purge.

Mandalorian is then greeted by an old friend, Ashoka Tano. He is surprised to see her there as she had refused to teach Grogu in the force earlier. He asks about her business there, but she quickly turns it around by asking the reason behind Mandalorian’s visit. To which he replies that he wishes to give Grogu an armor of Beskar since grogu was a Mandalorian Foundling. Ashoka doubts Mando’s intentions as she believes the Mando and Grogu have grown attached to one another. She promises to pass on the armor to Grogu and insists that Mando meeting with Grogu will only create trouble for Grogu. So leaves the armor with Ashoka and leaves the planet for his next destination, Tatooine.

After Mando leaves, Luke continues to train Grogu. Grogu is a fast learner and despite initial failures he continues to impress Luke.

Soon Ashoka arrives and talks about the strong bond between Mando and Grogu. She also passes on the Beskar armor to Luke which he takes. Though he wonders if Grogu truly wants to be a Jedi, to which Ashoka replies, “So much like your father”. Ashoka asks Luke to trust him instincts while teaching Grogu. She then leaves, leaving the two to their training.

Sparks of War in Tatooine

In Boba’s palace, Boba and his allies discuss their plans to counter the Pyke threat growing in Tatooine. Fennec Shand worries that with Mando and Wookie Warrior, Krrsantan on their side they have enough enforcers but not enough foot soldiers.

To which Mando proposes an idea and leaves for Mos Pelgo.

Mandalorian Reunites with The Marshall

Mando arrives on Mos Pelgo and is immediately threatened by the Deputy Marshall there. But Cobb Vanth arrives and dissipates the situation.

Mando explain the war between the Pykes and Boba Fett while sharing a drink. The Marshall seems somewhat unconvinced to fight for Boba and the local Bartender suggests that Mos Pelgo stays far from the fight. A downhearted Mando leaves the town but before leaving asks the Marshall to reconsider. The Marshall calls for a meeting with towns folk to discuss this matter as he is actually willing to go to war.

But he soon notices a strange silhouette approaching from the desert. It appears to be blue alien with a cowboy hat. The Clone Wars fans would easily recognize the character as Bounty Hunter, Cad Bane. Bane confronts the Marshall asking him to stay away from the war. Bane appears to have been hired by the Pykes. In a showdown fashion, Bane takes down the Marshall and the Deputy. Shooting the Marshall once and Deputy three times. And leaves.

The Pykes made another move by bombing The Sanctuary, a Cantina in Boba’s Territory.

Luke shows Grogu Mando’s gift, a chainmail made of Beskar. To which Grogu reacts happily. Then Luke presents Yoda’s lightsaber to Grogu, which he places next to the armor. The scene ends with Luke giving little Grogu a choice between the two. If Grogu chooses the armor he can return to Mando but if he chooses the lightsaber, he will continue to train as a Jedi and have to let go of attachments.

Just like the previous episode this too had no significant screen time for Boba Fett. Though the episode was good and bringing other Clone Wars character is a good choice, the heart is misplaced. While the story being of Boba Fett, he has been missing from his own show for 2 out of 7 episodes. Turning the show into The Mandalorian Season 3.

The cinematography and pacing of the episode seem good. And the episode conveys the emotion of what it wants to, quite well. The training arc of Grogu was a surprise but surely a welcome one.

The fans are hoping that they finally get to see Boba in action in the final episode, we cannot wait to see Grogu’s Decision and Fate of Tatooine soon.