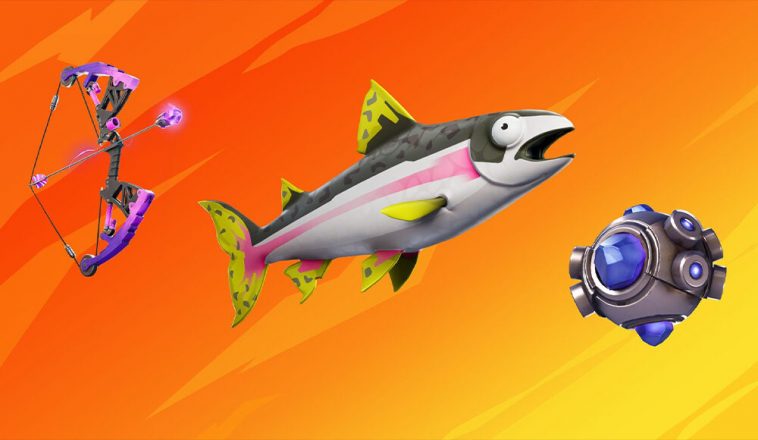 Fortnite has just launched its third Wild Week event, and this time it puts a focus on mobility. The Bouncing off the Walls week defies gravity by making certain items appear more frequently.

Two weeks ago, Epic Games announced a new series of events called Wild Weeks. These events would focus on one of Fortnite’s mechanics and amplify it. That week’s Legendary challenges would then correlate with the theme of that week.

The first Wild Week put a focus on fire by making flammable weapons appear more often. After the fires died down, Wild Week 2 put an emphasis on fishing. Fishing holes spawned more frequently and rare fish were more likely to be caught. But now it’s time to leave the seas behind and take to the skies.

Bounce off the Walls perks & challenges

As the name of this Wild Week implies, players will be bouncing all over the place this week. Shockwave Grenades and Shockwave Bows will appear as loot and in chest more often. Players will be more likely to catch Hop Floppers while fishing. And Hop Floppers can even be found inside freezers.

Also, Bounce Pads have been unvaulted for a limited time. These items will allow players to traverse the map much quicker or allow them to gain the high ground in battle. They will also help when completing this week’s Legendary Quests.

The Bouncing off the Walls Wild Week will last until May 27. Wild Weeks will then take a week off, and the final Wild Week will start on June 3. This will lead Season 6 to its end and on to Fortnite Season 7.

Fortnite is teaming up with the NBA to bring players The Crossover. Players can rep their favorite teams and compete for first place.

Fortnite has launched its official collaboration event with the NBA. During the Fortnite x NBA The Crossover event, players can choose a team to rep and earn points for.

First, players will need to visit nbateambattles.fortnite.com to sign in and choose a team to rep. After this, they can start to earn points for their team. Each day at 12 a.m. EST, a new task will be unlocked that will earn 1,000 points for the player’s team once completed. The first task is to play for 24 minutes in regular solo, duos, trios, or squads mode.

There will be five challenge tasks with the last one unlocking on May 23. From May 22 to 23, players will also be able to complete repeatable tasks that will earn more points for their team. The team with the most points scored at the end of the event is the winner.

There are also six new NBA skins which feature all new character models. There are 31 different uniforms the skins can wear including all 30 of the NBA teams. The set also includes a Mini Hoop Back Bling and the Hookshot Emote. These can be used together to shoot and score on the go. Lastly, the Dribblin’ traversal Emote allows players to school their opponents on and off the court.

Fortnite Season 6’s second Wild Week is here and it puts a major emphasis on fishing. Grab a rob and gear up for the Fish Fiesta.

X
Lil Nas X Saves His Younger Self In Emotional ‘Sun Goes Down’ Music Video…HollywoodLil Nas X/YouTube After sliding down a stripper pole to hell, then seducing and dethroning Satan in the music video for “Montero (Call Me by You…
close