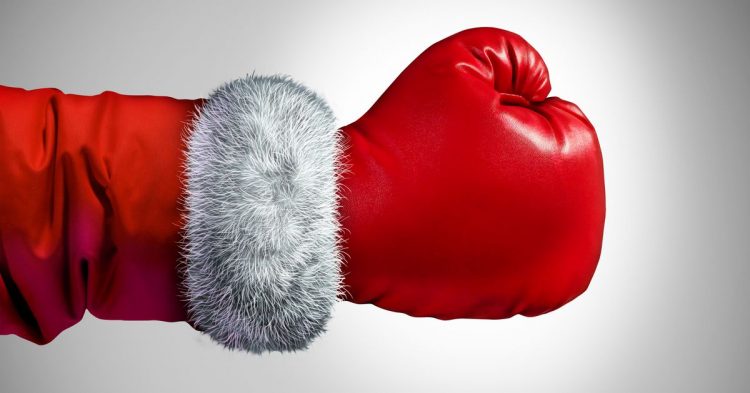 Christmas has come and gone, but in some countries, the celebration is far from over. Yes, gentle readers, December 26 is Boxing Day, which for Americans is the day we recover from our eggnog and gift-exchange hangovers but for other parts of the world is a holiday in its own right.

What is Boxing Day?

Boxing Day, which always falls on December 26, is observed as an official public holiday in the UK and many European countries, as well as in former British colonies such as Canada, Australia, New Zealand, and South Africa, among others. America has decided that, much like the metric system and extra U’s in certain words, we will not embrace this particular tradition. When Boxing Day falls on a weekend, countries that observe it designate the subsequent Monday as a holiday.

Origin stories of the holiday are mixed: Some say the name comes from the British aristocracy’s habit of presenting their servants with gifts on the day after Christmas, once their own celebration was over and lowly employees could finally get some time off. Another popular suggestion is that it arose from the tradition of making charitable donations during the Christmas season, wherein people would give boxes of food and other supplies to the less fortunate and churches would set out donation boxes to collect for the poor.

Still another theory centers on the 10th-century duke of Bohemia: As the story goes, the duke was out surveying his land the day after Christmas when he noticed a poor man trying to gather firewood in a blizzard. Moved, the duke went to the man’s house with a box of food, wine, and other items — a deed so noble, it was immortalized in the Christmas carol “Good King Wenceslas.”

But Boxing Day isn’t the only name for December 26. Some countries call it St. Stephen’s Day, in honor of a deacon who became the first Christian martyr when he was stoned to death in AD 36. In Ireland, it’s sometimes called Wren Day, which used to be marked by the heartwarming tradition of hunting down and murdering a small bird, tying it to a pole, and then going door to door singing the “Wren Song.” (Thankfully, this is no longer a thing people do.) South Africa renamed the holiday “Goodwill Day” in 1994 to “sever ties to a colonial past,” according to Cape Town Magazine. And some countries, including Poland and the Netherlands, eschew the fuss and just call it “Second Christmas Day.”

How Boxing Day is celebrated

Just like the countries that observe the holiday, the ways people celebrate Boxing Day are rich and varied, as this extremely formal and scientific Facebook poll shows:

Some people choose to mark the occasion with some copious drinking a la St. Patrick’s Day, another holiday that’s been somewhat co-opted by our baser instincts.

December 26 has also become, like Thanksgiving in America, an important day for sports. As Vice explained in 2014:

Of the 92 fully professional teams in England’s Football League, there are 46 live matches. Even in the Conference, England’s fifth and sixth tiers, where many teams are semi-pro, every club is at it. In the Southern Hemisphere, things are just as festive and equally sporty. The Melbourne Cricket Ground, the fabled, 160-year-old temple to cricket, is full: Australia is taking on India in the annual Boxing Day Test. Similar matches, in addition to an uncountable number of other sporting events, are taking place in New Zealand and South Africa.

However, one common denominator is that many countries have taken a holiday that’s said to have its roots in charitable giving and transformed it into a smorgasbord of commercial excess. Indeed, Boxing Day is now a major shopping event in many countries that observe the holiday; it’s kind of like Black Friday, except after Christmas instead of Thanksgiving. (This fact seems especially bizarre once you note that Britain and Canada also recognize Black Friday, and on the same day as the US, despite celebrating Thanksgiving in a totally different month or not at all.)

The drill is more or less the same: Stores offer steep discounts, and people spend hours waiting in line for the chance to 1) buy all the stuff they didn’t receive in their Christmas haul, and 2) escape the family members responsible for such shoddy gift buying.

Still, the tide may be turning toward the earlier shopping day, at least in some places: A 2018 survey by the Retail Council of Canada found that 40 percent of Canadians were planning to take advantage of Black Friday sales, as opposed to just 25 percent for Boxing Day.

For more on the glories of Boxing Day commercialism, check out the following comedy sketch from the British Columbia comedy troupe LoadingReadyRun, in which a man and a puppet discuss the “true meaning of Boxing Day” with help from a rather disturbing children’s book:

Though not nearly at the same level as Christmas or even Thanksgiving, Boxing Day does get its pop cultural representation. There’s a 2012 British film called Boxing Day that’s roughly based on a short story by Leo Tolstoy; there’s also a very uplifting-sounding 2007 film by the same name, about an alcoholic father with a terrible secret who’s trying to reunite his family.

The 10th season of M.A.S.H. featured an episode called “’Twas the Day After Christmas,” which sees British soldiers giving the 4077th the idea of following “Boxing Day tradition” by having the officers and service members switch positions and responsibilities for the day.

There’s also this cheery little 2012 ditty by Blink-182 about a guy whose girlfriend dumps him the day after Christmas:

Most years, December 26 is back to business as usual in the US. If you do happen to have the day off, you’ll likely be able to find some post-Christmas deals, and drinking at home is technically doable on any day of the year (as this year has made extra clear).

Alternatively, you could cook up your own Boxing Day feast. The BBC has compiled a menu of vaguely disquieting recipes for Boxing Day brunch, including Christmas cake soufflés, cheesy sprout fondue, and “ham and watercress salad with clementine dressing” — plus several dishes involving mincemeat, which, in case you aren’t familiar, is made of chopped fruit and spices and is used to repair buildings in war-torn countries.

Sausage rolls are another traditional Boxing Day dish in the UK, as a much-mocked 2015 New York Times article pointed out.

In a year that’s been hard for everyone, this December 26 could be a chance to get back to the roots of Boxing Day and helping those in need with a meaningful gift. And if nothing else, you could just opt to celebrate the “holiday” the American way: by binge-watching something holiday-themed while scarfing down a plate of leftovers.

Millions rely on Vox’s journalism to understand the coronavirus crisis. We believe it pays off for all of us, as a society and a democracy, when our neighbors and fellow citizens can access clear, concise information on the pandemic. But our distinctive explanatory journalism is expensive. Support from our readers helps us keep it free for everyone. If you have already made a financial contribution to Vox, thank you. If not, please consider making a contribution today from as little as $3.