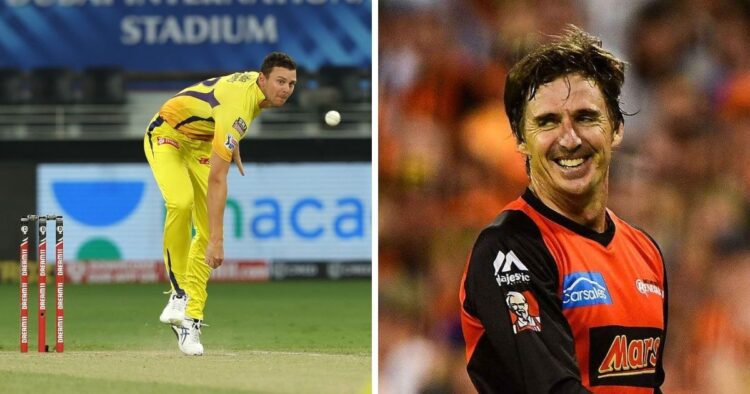 Former Australia cricketer Brad Hogg has suggested an ideal replacement for Chennai Super Kings fast bowler Josh Hazlewood, who pulled out of IPL 2021 scheduled to commence on April 9. He became the second cricketer after Sunrisers Hyderabad all-rounder Mitchell Marsh owing to bubble fatigue and to give himself “the best chance to be mentally and physically ready” as Australia gear up for a power-packed schedule in the next 12 months.

The fast bowler from Australia has been a part of different bio-secure bubbles from August 2020 to January this year. With a busy international season coming up, the experienced cricketer wants to give himself “the best chance to be mentally and physically ready”. Josh Hazlewood, who played three matches for Chennai Super Kings in the IPL 2020, was expected to travel to India on April 1 to link up with the franchise but now has declined to play in the cash-rich league.

Speaking on his decision, the 30-year-old fast bowler said that the decision comes considering a long season of international cricket beckons in the next 12 months. Australia play West Indies next followed by the T20 World Cup schedule to take place in India and then the caravan shifts to the high-profile Ashes series. Josh Hazlewood wants to keep himself fit both physically and mentally and thus has decided to pull out of IPL 2021.

It’s been a long 10 months in bubbles and quarantine at different times, so I decided to have a rest from cricket and spend some time at home and in Australia in the next two months,” Hazlewood said to cricket.com.au.

“We’ve got a big winter ahead too. The West Indies is going to be a long tour, with Bangladesh (T20 tour) potentially thrown on the end of that. Then potentially the T20 World Cup leading into the Ashes, so it’s a big 12 months, as it always is with Australia, and I want to give myself the best chance to be mentally and physically ready for that. That’s the decision I’ve made, and it sits pretty well with me,” he added.

Meanwhile, as Chennai Super Kings continue to look for an ideal replacement for Josh Hazlewood, Brad Hogg has suggested that South African fast bowler Lungi Ngidi can replace the Aussie fast bowler. Brad Hogg also stated that the MS Dhoni-led side won’t be too bothered with Hazlewood pulling out of IPL 2021.

“CSK had a brilliant bowling lineup with Hazlewood in it, but one man doesn’t make a team, Ngidi will fill that void with the Australian pulling out. #CSK looking fairly strong this year. #IPL2021,” tweeted Brad Hogg.

CSK had a brilliant bowling line up with Hazlewood in it, but one man doesn’t make a team, Ngidi will fill that void with the Australian pulling out. #CSK looking fairly strong this year. #IPL2021