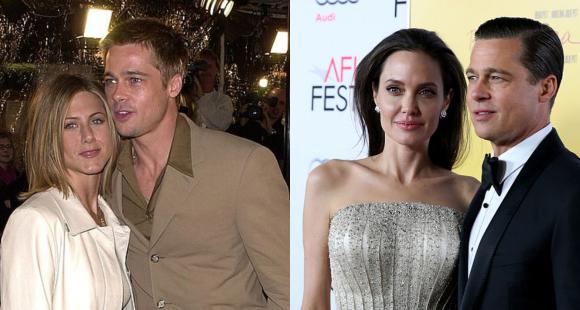 In today’s Thursday Throwback, we look at the time Jennifer Aniston said she wanted to have a baby with Brad Pitt before life took a drastic turn and it involved Angelina Jolie.

Jennifer Aniston was preparing to take a bow as Rachel Green from Friends when she was thinking of having a baby. The actress, who was married to Brad Pitt at the time, was a household name at the time owing to the popularity of the show. But she confessed she was ready to slow things down and add another family member into her and Brad”s lives. Speaking with The Guardian in 2004, the actress revealed that it was time to have a baby.

She said, “I think you can work with a baby, I think you can work pregnant, I think you can do all of it. So I’m just truly looking forward to slowing down.” Jen added that the timing felt right. She was bidding the American sitcom goodbye while Brad was wrapping up Mr. and Mrs. Smith the following month, co-starring his now-ex-wife Angelina Jolie. In the following months, the world witnessed a series of events unfolding which included Brad and Jen parting ways while the actor being spotted with his new girlfriend Angie.

In 2018, Jennifer addressed about children during an interview with InStyle and noted that there was pressure among women to be mothers. If they aren’t, then they are considered damaged goods. “Maybe my purpose on this planet isn’t to procreate. Maybe I have other things I’m supposed to do?” she pondered.

As for Brad, the actor became the father of six children with Angelina. The actor shares Maddox, Pax, Shiloh, Zahara, Vivienne and Knox with the actress and currently involved in a custody battle. Stay tuned to Pinkvilla for more updates.

Back to Top
Close Add post
X
Rebel Wilson Says People Treat Her Differently Since Losing Weight!…GossipsRebel Wilson has been working hard on her weight loss and she’s actually already managed to reach her original goal weight of 165 pounds in the months…