Brahmastra duo Ranbir Kapoor & Alia Bhatt opt for casuals as they drop by Dharma office on the weekend; WATCH 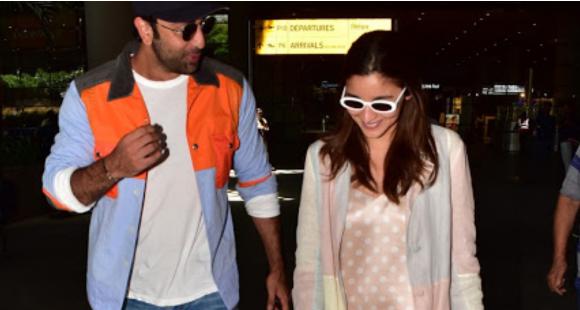 On Saturday, Ranbir Kapoor and Alia Bhatt were snapped at Dharma Productions’ office in Mumbai. The Brahmastra duo were seen making their way for a meeting.

Brahmastra duo Ranbir Kapoor & Alia Bhatt opt for casuals as they drop by Dharma office on the weekend; WATCH

Over the past few days, reports related to Alia Bhatt and Ranbir Kapoor starrer Brahmastra have been coming. As per a national daily, Alia and Ranbir along with the rest of the crew may reportedly kick off the final leg of the shoot this month for Brahmastra and wrap it up. Amid this, Alia and Ranbir were spotted arriving at the old Dharma Productions office this afternoon. The couple was seen heading inside the building after acknowledging the paparazzi from a distance.

In the video, we can see Ranbir getting out of his car and stopping for a second to pose for the paparazzi. The Brahmastra star is seen showing a thumbs-up sign to the photographers as he heads inside for the meeting at the Dharma office. He is seen clad in a black hoodie with light green cargo pants. He teamed it up with a camo mask, white sneakers and a cap. On the other hand, Alia was also spotted at the Dharma office at the same time.

She is seen opting for a pink and orange tye-dye co-ord set. Along with it, she teamed up a sling bag and heels. Alia accessorised the look with gold hoop earrings and her hair was tied up in a bun.

Take a look at Alia and Ranbir”s video:

Meanwhile, the recent report by the national daily claimed that Alia and Ranbir will join director Ayan Mukerji for shooting the final schedule of Brahmastra from February 18 in the city. Brahmastra also stars Amitabh Bachchan, Nagarjuna Akkineni, Dimple Kapadia, and Mouni Roy. The film is produced by Karan Johar and was announced as a trilogy. Back in 2019, the logo for the film was launched in a hi-tech fashion in Prayagraj with 150 drones lighting up the sky.

Also Read|Ranbir Kapoor & Alia Bhatt to kick off last shooting stint in the city for ‘Brahmastra’ on THIS date?