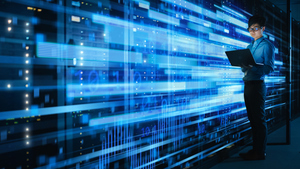 It’s no exaggeration to say that we’re witnessing the rebirth of object storage. For years, object storage was perceived as a solution best suited to inexpensive backup, long-term archive, and massive data lakes. That was then. These days, unstructured data has moved into the driver’s seat. Organizations deploy fast, flexible, scalable, cost-efficient object storage across myriad use cases throughout the enterprise, including test/dev, analytics, data protection, ML & AI — and even primary storage.

What’s driving this dramatic change? To begin with, a tidal wave of data, and a correspondingly large shift in the way organizations collect, store, and analyze that data. We’ve previously discussed the challenges of explosive data growth and the need for enterprises to rethink IT strategies. With each passing day it only becomes clearer that data is now the fundamental issue that enterprises must get right.

In this context, thriving — or even surviving — in the market today depends heavily on mining data for the insights that will drive new customer experiences and business value. Enterprises must understand what’s in their data — which means deploying a storage platform that enables large-scale, economical data storage and powers bandwidth-hungry analytics into diverse data types — two things that object storage does exceptionally well.

The other key factor in the rise of object storage is the rapid emergence of cloud-native applications. Built on micro-services and frequently data intensive, cloud-native apps rely on containerization and object storage. Their increasing popularity not just in the cloud, but in the data center and even at the edge, is driving a rethink of on-prem IT resources.

Detailing the trend toward object storage

That’s the big picture. Now let’s take a deeper look at four trends in the marketplace that have accelerated the shift to object storage and which enable us to draw a more nuanced picture of the case for object storage-based IT.

As we can see, the cloud-native model, powered by object storage, is fundamentally transforming the ways IT teams manage data and its underlying infrastructure. According to Enrico Signoretti of GigaOm, “whether in the cloud or on-premises (usually both), object storage is part of every IT infrastructure and becoming more important every day — both in terms of capacity and the number of applications and workloads using it. Now, it is more important than ever to have a grasp on the technology and include it in your overall IT strategy.”

Given these trends, IT decision-makers should be looking to augment core file- and block-based storage with modern, agile object storage solutions that can handle the entire cloud-native pipeline, from development to production to analytics, AI, and data protection.

In fact, with the right vendor, organizations can leverage an object storage architecture capable of meeting numerous emerging workload needs while enabling data to flow seamlessly from edge to cloud. The more sophisticated solutions provide fast access to data wherever it lives, consistent management across clouds, and varying entry points to enable deployments at the edge as well as at the core.

HPE and Scality, for example, have partnered to deliver a family of lightweight, enterprise-grade cloud-native object storage solutions that cover the gamut of cloud-native use cases from core to edge. Organizations across industries, including those at the cutting edge of data exploration, are already leveraging solutions from HPE and Scality to power their next-generation workloads.

When used as persistent storage for today’s modern cloud-native applications, object storage offers the trifecta of speed, scale, and cost-effectiveness that organizations need. That’s why it’s a solid bet that we’ll see object storage underpin the next generation of enterprise IT.

Matt leads Solution Marketing for the HPE Storage business, covering such areas as file and object storage, scale-out storage, virtualization and containers, and cloud-native technologies.   Matt has a nearly a 20-year tenure in the storage industry, and came to HPE through the acquisition of Nimble Storage in 2017.  At Nimble, Matt held product and solutions marketing roles where, in part, he grew the converged infrastructure business to over $100M and also led marketing for Nimble’s ground-breaking AIOps engine, InfoSight.  Matt has also worked for industry innovators such as NetApp, Sun Microsystems, Veritas Software and Compaq.  He holds a Bachelor’s degree in Business Management from Marist College, and an MBA from Vanderbilt University.  Matt resides in the San Francisco Bay Area with his wife and two daughters.  Connect with Matt on LinkedIn and Twitter!