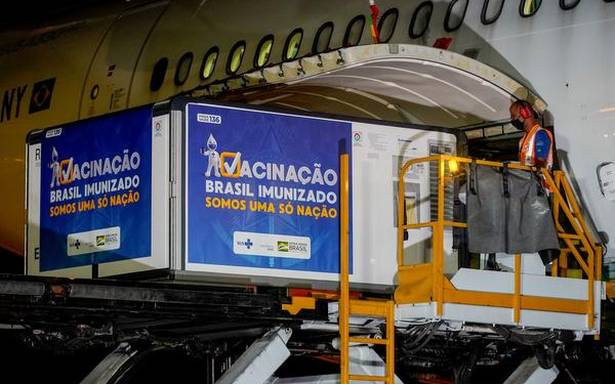 India began commercial exports and sent two million doses of Covishield, developed by AstraZeneca and the University of Oxford, to Brazil on January 22.

Brazilian President Jair Bolsonaro thanked Prime Minister Narendra Modi for providing two million doses of COVID-19 vaccines to fight the pandemic in his country, one of the worst-hit nations.

India, one of the world’s biggest drugmakers, on January 22 began commercial exports and sent two million doses of Covishield, developed by AstraZeneca and the University of Oxford, to Brazil.

“Namaskar, Prime Minister @narendramodi. Brazil is honoured to have a great partner to overcome a global obstacle. Thank you for helping us with vaccine exports from India to Brazil. Dhanyavaad!” Mr. Bolsonaro tweeted on January 22, adding another “Dhanyavaad” in the end in the Hindi script.

He also tweeted a picture of Lord Hanuman carrying a vaccine from India to Brazil.

Brazil’s government has received 2 million doses of coronavirus vaccine from India. Brazil’s Health Ministry announced that the vaccine landed in Sao Paulo on January 22 before being flown to Rio de Janeiro, where Brazil’s state-run Fiocruz Institute is based, the Associated Press reported.

Fiocruz has an agreement to produce and distribute the vaccine, the report said. In April, India also provided the Latin American country raw materials for the production of anti-malarial drug hydroxychloroquine.

Brazil has the second highest number of coronavirus cases in the world next only to the United States. The total number of cases are over 8.7 million and 2,14,000 deaths related to COVID-19 have been recorded.

India is one of the world’s biggest drugmakers, and an increasing number of countries have already approached it for procuring the coronavirus vaccines. India has already rolled out a massive coronavirus vaccination drive under which two vaccines, Covishield and Covaxin, are being administered to frontline health workers across the country.

While Oxford-AstraZeneca’s Covishield is being manufactured by the Serum Institute, and Covaxin is being produced by Bharat Biotech.

India had earlier supplied hydroxychloroquine, Remdesivir and paracetamol tablets, as well as diagnostic kits, ventilators, masks, gloves and other medical supplies to a large number of countries to help them deal with the pandemic.