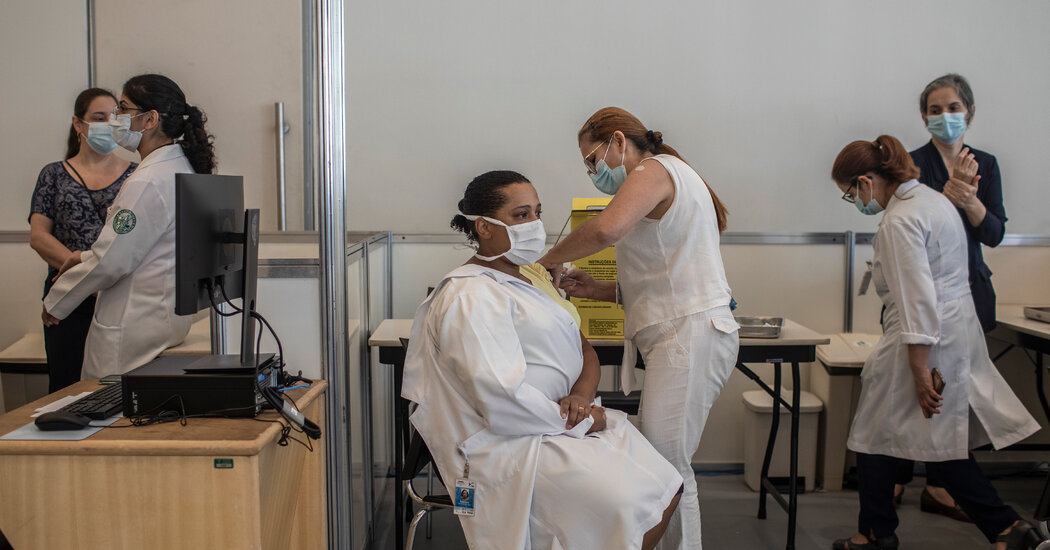 RIO DE JANEIRO — Brazil on Monday kicked off its nationwide coronavirus vaccination campaign, providing a glimmer of hope in a nation where political infighting, a strained health care system and lax precautions have given the virus free rein.

But the rollout is expected to be painfully slow, even as Brazil battles two worrisome new variants of the virus, at least one of which is more contagious and could be helping drive the country’s recent surge of cases.

The government is scrambling to buy more vaccine after months of taking a lackadaisical approach, as President Jair Bolsonaro argued that scientists and the media were hyping the seriousness of a virus that has killed more than 210,000 Brazilians. The country now has just six million doses of vaccine on hand for a nation of 213 million people.

The potential menace of the new variants became clear last week as patients in the northern state of Amazonas asphyxiated to death because hospitals ran out of oxygen amid a sharp rise in critically ill patients. Prosecutors investigating the calamity said at least 16 patients had died.

The oxygen shortage “is the saddest and most outrageous expression of the government’s abject failure at all levels,” Alex Machado Campos, a director of the country’s health regulatory agency said in televised remarks Sunday. “Is this a civilized nation or one living through a barbaric dystopia?”

The lack of vaccine doses is just one of myriad missteps that have hampered the country’s ability to protect its people against the pandemic. Mr. Bolsonaro has been criticized for repeatedly downplaying the threat of the virus, promoting a useless treatment, refusing to wear a mask, sabotaging other officials’ lockdown measures and, most recently, fueling unfounded fears about the safety of vaccines.

Last month, the president, who had Covid-19 and recovered, said he had no intention of getting a vaccine and criticized vaccine providers for asking buyers to sign hold-harmless agreements.

“It’s quite clear in the contract: they take no responsibility for any collateral effect,” Mr. Bolsonaro said, taking aim at the American drug company Pfizer. “If you turn into a crocodile, that’s your problem.”

After peaking in July, when Brazil regularly had 1,200 coronavirus deaths per day, cases and fatalities dropped gradually for a few months, but began to inch up in November. In recent weeks, the country has often reported more than 1,000 deaths a day, and Brazil’s death toll is second only to that in the United States.

Brazilian scientists say the resurgence of the virus may result from two new variants they discovered in Brazil and publicly disclosed in the last month. The one in Amazonas contains a mutation that has been linked with higher contagiousness, and both variants have another mutation that may weaken the efficacy of vaccines.

The two mutated viruses have slipped the country’s borders and turned up in other parts of the world, with the latest discovery occurring in Japan.

While virus mutations are common, experts say hard-hit countries like Brazil provide fertile ground for new variants that could hamper the global response. Despite a rise in cases, bars and restaurants are doing brisk business and mask wearing is spotty.

“The appearance of these variants is directly proportional to people’s lack of care,” said Luiz Vicente Rizzo, the head of research at Israeli Albert Einstein Hospital in São Paulo.

Pedro Hallal, a Harvard-trained epidemiologist who led a study on the evolution of the virus in Brazil at the Federal University of Pelotas, said the drastic surge of cases in Manaus, the capital of Amazonas, suggests that the new strain there is likely more contagious.

“I am not someone who believes in coincidences,” Mr. Hallal said. “Our new variant was found in Manaus and now cases are booming. It’s improbable that there isn’t a correlation between one thing and the other.”

Brazilian scientists say they are working around the clock to have a more complete picture of the prevalence of new variants, but labs have limited capacity to sequence virus genomes compared to their counterparts in countries like the United States and Britain.

“With the resources and the funds we have at this moment in the country, we are doing the best we can,” said Paola Resende, a virologist at Rio de Janeiro’s Laboratory of Respiratory Viruses and Measles.

Reports of the variants in Brazil have raised alarm abroad. Officials in Japan reported last week that they had diagnosed cases of the new variant in four passengers who arrived in Tokyo after traveling from Manaus.

Health experts had hoped Brazil would be among the earliest countries to mount a swift and efficient vaccination campaign, given the country’s strong track record on immunization efforts. But the rollout has been chaotic and bitterly politicized.

Health minister Eduardo Pazuello last week announced he would travel to India to personally pick up two million doses of the vaccine developed by AstraZeneca and Oxford University that India has been allowed to manufacture. But in an embarrassing setback, the flight was scuttled at the last minute after officials in India, who were about to launch their own vaccination program, told the Brazilian government they didn’t yet have doses to spare.

The attempted purchase from India appeared to be a bid by Mr. Bolsonaro’s government to outflank one of his political rivals, São Paulo Governor João Doria. Mr. Doria, who has championed the vaccine produced by China’s Sinovac, had procured a few million doses of that vaccine even before his country’s health regulators approved it on Sunday.

The Sinovac purchase came as part of an agreement to allow China to test the vaccine in Brazil, in conjunction with a São Paulo-based research institute. While there is some relief that Brazil has any vaccine on hand, the efficacy rate of that vaccine, CoronaVac, turned out to be just over 50 percent, far less than other inoculations.

Mr. Doria took aim at the Bolsonaro government on Sunday as he presided over an event in São Paulo where the first handful of health care workers received shots. The nationwide campaign began a day later.

“The vaccine is a lesson for you, authoritarians who disregard life, who lack compassion,” he said.

Mr. Pazuello, an Army general, responded angrily, accusing Mr. Doria of turning the vaccine rollout into a “marketing play” to boost his political standing. Mr. Doria is widely expected to run for president next year.

Despite Mr. Bolsonaro’s antipathy toward CoronaVac — he has called Chinese products untrustworthy — the health ministry demanded that Mr. Doria turn over his supply of the vaccine to the federal government for use across the country. The governor acquiesced, though he kept some for his state.

The federal government has established priority groups for the vaccine, but officials have yet to provide a detailed plan that outlines when certain groups will be vaccinated and how many doses of which vaccines the country intends to obtain.

On Monday, Mr. Bolsonaro said Brazil would purchase vaccines as they become “available in the market.”

Mr. Pazuello, meanwhile, has been faulted for failing to anticipate the oxygen crisis in Manaus, the capital of Amazonas state, which sparked a chaotic evacuation of patients, including some premature babies, to other states.

From Thursday through Sunday, 312 people died from Covid-19 in Amazonas, a toll 50 percent higher than in the proceeding four days.

Amazonas Governor Wilson Lima said his team had warned that hospitals were running dangerously low on oxygen days before patients began asphyxiating. “We weren’t able to get what we needed,” he said in an interview.

With patients in distress, officials in Manaus got oxygen tanks from neighboring Venezuela giving its authoritarian president, Nicolás Maduro, a public relations victory against Mr. Bolsonaro, a nemesis. The failure to have enough oxygen on hand is now being investigated by the Supreme Court.

The health ministry did not respond to emailed questions about the situation in Manaus.

David Luniere, a doctor in Manaus, compared the frenzied scenes of triage in his hospital to treating patients in a war zone. When a woman whose father died in his care thanked him profusely for his efforts, Dr. Luniere felt gutted.

“She told me she knew I had done everything I could do for her father,” he said. “I know I didn’t do everything I can because I couldn’t.”

Biden plans to continue many of Trump’s foreign policies — at least...

Why Joe Biden’s pro-union message is so significant