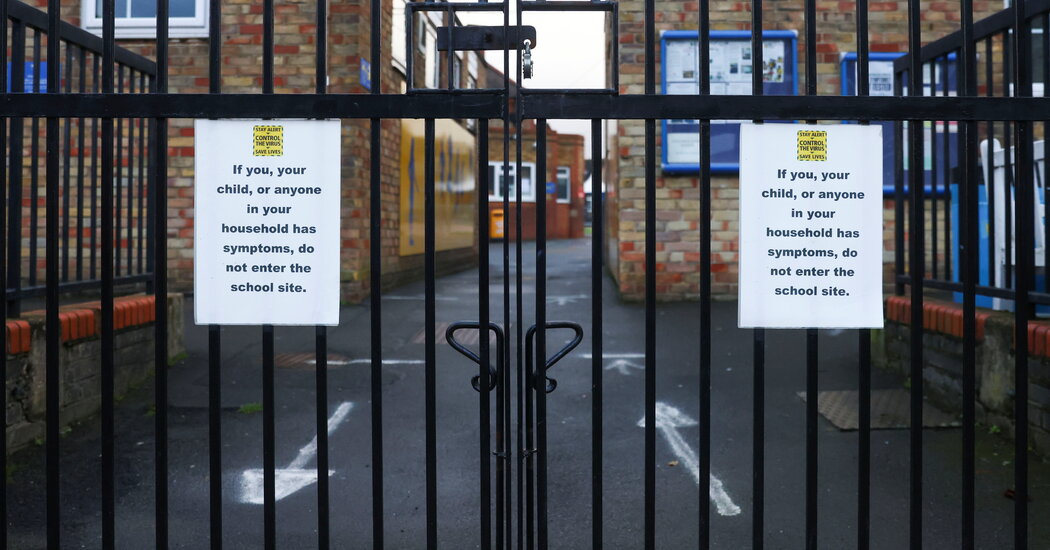 (Want to get this briefing by email? Here’s the sign-up.)

But with classes set to restart in many primary schools in England today, Mr. Johnson added that parents should “absolutely” send their children to schools if possible. “Schools are safe,” he said in a BBC interview.

Britain has the highest number of Covid-19 deaths in Europe.

In other virus developments:

In an hourlong telephone call on Saturday, President Trump pressed Georgia’s top election official to “find” him enough votes to overturn the presidential election and vaguely threatened him with “a criminal offense,” according to an audio recording of the conversation.

He told the state’s Republican secretary of state that he should recalculate the vote count so Mr. Trump, not Joe Biden, would end up winning the state’s 16 electoral votes.

Russia is both friend and foe for Biden

But renewing the New Start will be made more complex because of Mr. Biden’s vow to also assure that Moscow pays for what appears to be the largest-ever hacking of U.S. government networks.

In an interview on CNN, Mr. Sullivan also said that as soon as Iran re-entered compliance with the 2015 nuclear deal — which he helped negotiate under President Barack Obama — there would be a “follow-on negotiation” over its missile capabilities.

If you have 7 minutes, this is worth it

France’s literary elite: A year under a harsh spotlight

In a nation where literature remains sacred, Olivier Nora, above, the head of a leading French publisher for the past 20 years, sees himself as a guarantor of what he described as a “social good.”

His publication last January of a book by the victim of a pedophile writer set off a national reckoning over sexism, age and consent. It also helped expose what critics of the French publishing industry say is an insulated, out-of-touch literary elite long used to operating above ordinary rules.

Niger massacre: One hundred civilians were reported dead in two villages in a region under siege by militants. Gunmen were described as having singled out men and boys in what was said to be a revenge attack, just a week after Niger’s presidential election.

Pakistan attack: Armed men abducted and killed at least 11 coal miners in the southwestern part of the country, officials said. All of the victims were ethnic Hazaras, a minority Shiite group that has often been the target of Sunni extremists.

Assange case: A judge in London plans to rule today on whether Britain should extradite Julian Assange to the U.S., where the WikiLeaks founder faces charges of conspiring to hack government computers and violating the Espionage Act in 2010 and 2011.

Italy mourns: The killing of 42-year-old Agitu Ideo Gudeta, an Ethiopian-born immigrant who raised goats and made cheese in a remote part of Italy, has resonated across the country. The Italian news media praised her as a model of integration.

Snapshot: Above, Kai Jones leaping off a cliff in Jackson Hole, Wyo. The 14-year-old ski daredevil is already a pro, soaring off mammoth ledges and doing double back flips. He concedes, “I always say to myself, ‘How far can I push it and not make my mom scared?’”

In memoriam: Brian Urquhart, a British diplomat who joined the United Nations at its birth in 1945 and was a chief aide to five of its secretaries general while directing peacekeeping operations around the world, died on Saturday at his home in Massachusetts. He was 101.

The final frontier: Our Science desk offers a calendar and a guide to 2021’s astronomical events.

Cook: This flaming baba au rhum is an afternoon project with delicious, sophisticated results. In the video accompanying the recipe, Melissa Clark takes you through every step of making and baking the rich, airy yeast dough, and then setting it on fire.

Watch: The BBC television movie “Elizabeth Is Missing” features Glenda Jackson’s first screen performance since 1992. The renowned actress stars as a woman fending off dementia while she searches for a lost friend.

Do: For many people, 2020 was not a year for saving money. Here’s how to get a handle on your finances in the new year, with a few tricks to help keep your spending down.

We’ll try to help you make those New Year’s intentions stick with our At Home collection of ideas on what to read, cook, watch and do while staying safe at home.

When the pandemic is over

The rollout of vaccines around the world signals the start of a hopeful chapter after nearly a year of lockdowns, restrictions and social distancing. Now that imagining an “after time” seems possible, we asked readers to share the first things they plan to do when the world returns to normal. Here are some of their answers.

Give a big hug

“Hug my grandmother real tight. I visited her once, but I just waved at her outside her room and then she responded by asking who I was. I lowered my mask to show her my face, and she asked me to come closer. I said I couldn’t.”

“I want to go to my home country, Peru, to see my mom and my dad’s ashes. He died in November, and I couldn’t give him a hug goodbye for fear of traveling there during the pandemic.”

… and get away from them

“I’m hiring a babysitter and going out dancing.”

“I am 85 years old. When the pandemic began, I was 84, and when it ends I will probably be 86. Two years at the end of one’s life are rather valuable. What I’d like to do is fly to Boston and walk the Freedom Trail; drive to Maine and find a lobster shack; and visit Egypt to sail down the Nile.”

That’s it for this briefing. See you next time.

Thank you
To Theodore Kim and Jahaan Singh for the break from the news. You can reach the team at [email protected]

P.S.
• We’re listening to “The Daily.” Our latest episode is on the story of the 1964 earthquake in Alaska.
• Here’s today’s Mini Crossword puzzle, and a clue: Parts of a six-pack (five letters). You can find all of our puzzles here.
• Arthur O. Sulzberger Jr. retired as chairman of The New York Times Company on Dec. 31 and handed over the reins to his son, A.G. Sulzberger, the publisher of The Times.