Bruised Kangana Ranaut aka Agni says ‘bring it on’ after 14 hours of non stop action shoot for Dhaakad; PHOTO 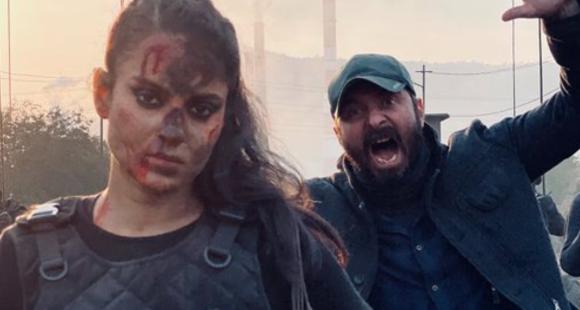 Kangana Ranaut has been shooting for Dhaakad in Madhya Pradesh. Recently, the star shared a bruised look post a non-stop 14 hour night shoot. Despite the long hours, the star was ready for more as she asked her director Razneesh Ghai to go on.

Bruised Kangana Ranaut aka Agni says ‘bring it on’ after 14 hours of non stop action shoot for Dhaakad; PHOTO

Actress Kangana Ranaut almost broke the internet recently when she shared a stunning look as Agent Agni from the sets of Dhaakad. In the actioner, Kangana will be seen in a badass agent avatar who stops at nothing. For the film”s action stunts, Kangana has undergone immense physical training and from the still, it surely looked as if the star is leaving no stone unturned in proving to be the best female action star the nation has ever seen on celluloid. Now, once again, she has given an example of her resilience as she dropped a photo with director Razneesh ‘Razy’ Ghai after 14 hours of non-stop shooting.

Taking to her Instagram handle, Kangana shared a photo of herself from the sets of Dhaakad. Director Razneesh could be seen photobombing Kangana’s intense photo. Kangana is seen as Agent Agni and is all bruised with her face covered in blood stains. However, despite the long hours of night shoot with all action stunts, Kangana remained in high spirits and asked her director to ‘bring it on.’ In the photo, she is seen clad in an all black armour with her hair tied up in a high pony.

Sharing the photo with director Razneesh Ghai after 14 hours of non-stop action shoot, Kangana wrote, “10th night shift non stop action, 14 hours shift night rolled in to morning but our chief @RazyGhai be like tum mujhe khoon do main tumhe aazadi dunga..Well I am all yours ….. bring it on #Dhaakad.”

10th night shift non stop action, 14 hours shift night rolled in to morning but our chief ⁦@RazyGhai⁩ be like tum mujhe khoon do main tumhe aazadi dunga..
Well I am all yours ….. bring it on #Dhaakad pic.twitter.com/8aswVi7Lce

Over the past few weeks, Kangana has been dedicatedly working on Dhaakad. The star will be seen in a never-seen-before action avatar of an agent in the film. The film also stars Divya Dutta and Arjun Rampal. The action flick is being directed by Razneesh Ghai and produced by Sohail Maklai Productions and Asylum Films. The film is all set to release on October 1, 2021.