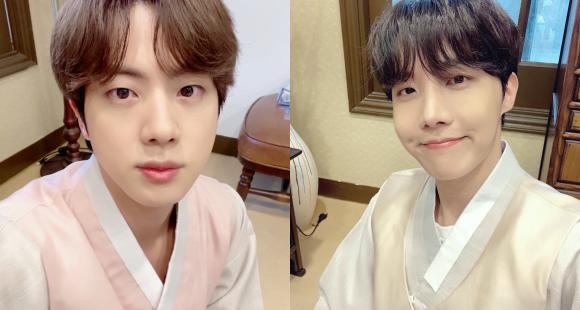 BTS members Jin and J-Hope posted handsome selcas of themselves wearing hanboks as they wished ARMY for Lunar New Year, which is on February 12.

BTS may be busy with the impending release of BE: Essential Edition, but they never forget to wish their beloved fandom, ARMY, on important occasions. BTS members wished ARMY for Lunar New Year, which falls on February 12 this year, but Korean citizens will be celebrating it over a long weekend, starting February 11 to February 13. BTS members Jin and Hobi greeted ARMY with handsome selcas of themselves, colour-coordinating in pink and cream coloured hanboks, as they wished ARMY via, Twitter.

You can check out Jin and J-Hope”s handsome selcas below :

The Grammy-nominated performers are confirmed to take centre stage with MTV Unplugged, a special series dedicated for artists to showcase never heard before iterations of their discography. BTS will take the stage from Seoul, for a special show dedicated to them on February 23 at 9 pm ET.

ALSO READ: BTS to enthral ARMY with MTV Unplugged appearance; Will perform never before seen versions of their hit songs