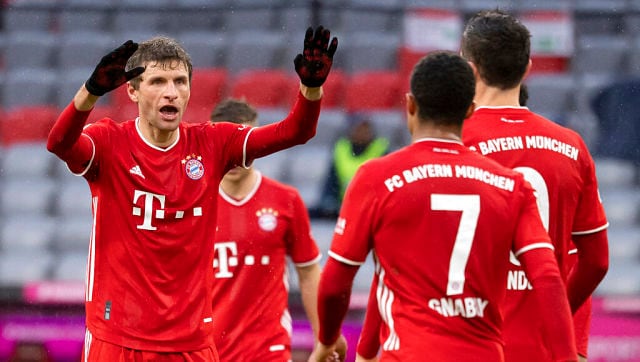 The European champions exacted perfect revenge for their only defeat of 2020 after losing by the same 4-1 scoreline at Hoffenheim last September. Berlin: Bayern Munich remained seven points clear at the top of the Bundesliga following a 4-1 victory over Hoffenheim on Saturday as Robert Lewandowski continued his incredible scoring run with his 24th league goal this season.

“4-1 is a very good result for us. We have won our last four games – that is our yardstick,” said head coach Hansi Flick, whose side have regained form after back-to-back league and cup defeats earlier this month.

The European champions exacted perfect revenge for their only defeat of 2020 after losing by the same 4-1 scoreline at Hoffenheim last September.

Bayern were all business in Munich as Boateng headed the hosts into an early lead. Mueller then added a second having earlier struck the post.

It was 2-1 at the break as Hoffenheim striker Andrej Kramaric, who netted twice in the reverse meeting with Bayern, volleyed home a cross for his fifth goal in three games.

However, Bayern moved up a gear in the second half.

Lewandowski tapped home having typically been in the right place at the right time after a Kingsley Coman shot was parried.

It became a rout when Coman won the ball back and chipped over the defence for Gnabry to fire between the legs of Hoffenheim goalkeeper Oliver Baumann with an hour gone.

A fifth Bayern goal was disallowed following a VAR review with Leroy Sane offside in the build-up before Benjamin Pavard turned home.

“Because it was relatively easy for us to get into the danger zone up front, we missed a trick or two at the back” said Mueller, who praised the assured performance of goalkeeper Manuel Neuer.

Second-placed RB Leipzig kept pace with Bayern in the table after Christopher Nkunku scored in a hard-fought 1-0 home win over Bayer Leverkusen.

Peter Bosz’s Leverkusen dropped to fourth after a third defeat in the last fortnight.

Eintracht Frankfurt replaced them in third as Portugal striker Andre Silva scored twice, taking his tally this season to 16 league goals, in a 3-1 home win over Hertha Berlin.

After three matches without a win, Borussia Dortmund climbed to fifth with a 3-1 home victory over Augsburg as England winger Jadon Sancho notched his third goal of the new year.

Dreadful Dortmund defending afforded Andre Hahn too much time and space in the area to fire Augsburg into an early lead.

Erling Braut Haaland blasted a penalty attempt against the crossbar on 21 minutes, the third spot-kick missed by Dortmund this season.

However, Thomas Delaney calmed their nerves with a headed goal from a corner before Sancho put Dortmund ahead.

Augsburg defender Felix Uduokhai then scored an own goal as Dortmund bounced back from consecutive defeats.

“A win like that is much nicer than the results we have had in recent weeks,” admitted Dortmund winger Julian Brandt.

Borussia Moenchengladbach became the latest big name to struggle at Union Berlin after being held to a 1-1 draw.

Leverkusen and Dortmund have already lost in eastern Berlin this season and Gladbach needed an Alassane Plea equaliser to get the point which leaves them seventh.

Schalke remained rooted to the bottom, now nine points from escaping the relegation places, after a 1-1 draw at Werder Bremen.