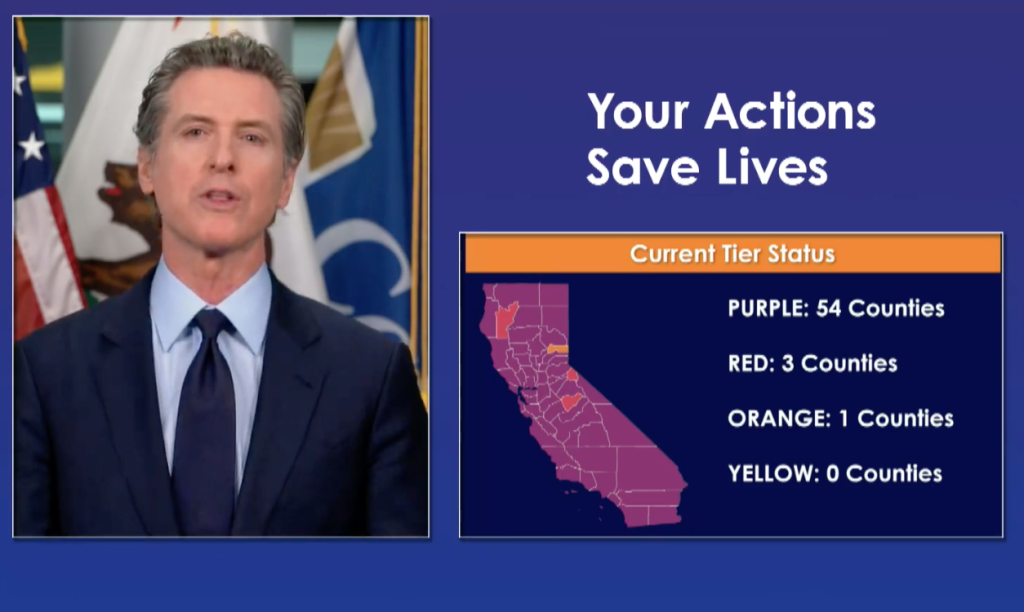 While case and hospitalization numbers are indeed falling, the number of daily deaths attributed to the virus has remained stubbornly high, setting a new record of 761 on Thursday. The percentage of those dying in overcrowded ICUs has doubled since October.

The governor said the decision to end the order was based on four-week ICU projections, the formula for which the state had been unwilling to divulge. On Monday, Newsom sought to open that black box.

When asked if the sudden turnaround was a result of the ongoing recall campaign and lawsuits against him, the governor said succinctly, “That’s just complete and utter nonsense.”

Newsom said thye state’s reopenings are based on four week projections. For example, the state projected on Monday that L.A. will move from 0% ICU capacity now to 33% capacity in three weeks. Curiously, that would take it from the state’s least-resourced region to the most resourced region.

Dr. Mark Ghaly said those projections are based on a commonly-used formula throughout the pandemic. That is: predictably two weeks after a daily case count, 12 percent of that day’s cases will be hospitalized, a predictable percentage of those will land in the ICU (in LA, that has been 23% of late) and a certain percentage of ICU patients end up dying. Ghaly pointed out that those percentages pertain not just as cases rise, but as they fall, and that is how the four week projections were arrived at.

Going forward, however, CA will revert to the its Blueprint for a Safer Economy, which color codes each county and uses actual transmission rates, not projections.

Officials with the California Department of Public Health on Monday lifted the stay-at-home order for all counties amid signs that Covid-19 is spreading at a slower rate across the state.

Authorities cited improving conditions in hospitals but noted that counties remain subject to the restrictive “purple tier” of guidelines for economic reopening. Individual counties, however, still are able to impose stricter restrictions than the state. It was unclear whether Los Angeles County — considered a national epicenter of the current surge in the virus — would be easing any of its restrictions.

But the state’s move today may lead to a resumption of outdoor dining and as at least some services at gyms, barber shops and nail salons, among other businesses.

“California is slowly starting to emerge from the most dangerous surge of this pandemic yet, which is the light at the end of the tunnel we’ve been hoping for,” said Dr. Mark Ghaly, secretary of California Health and Human Services. “Seven weeks ago, our hospitals and front-line medical workers were stretched to their limits, but Californians heard the urgent message to stay home when possible and our surge after the December holidays did not overwhelm the health care system to the degree we had feared.”

The regional stay-at-home order was imposed in Southern California early last month when intensive-care unit capacity dropped below 15%. The regional capacity subsequently dropped to an adjusted 0%, and the order was extended on December 29.