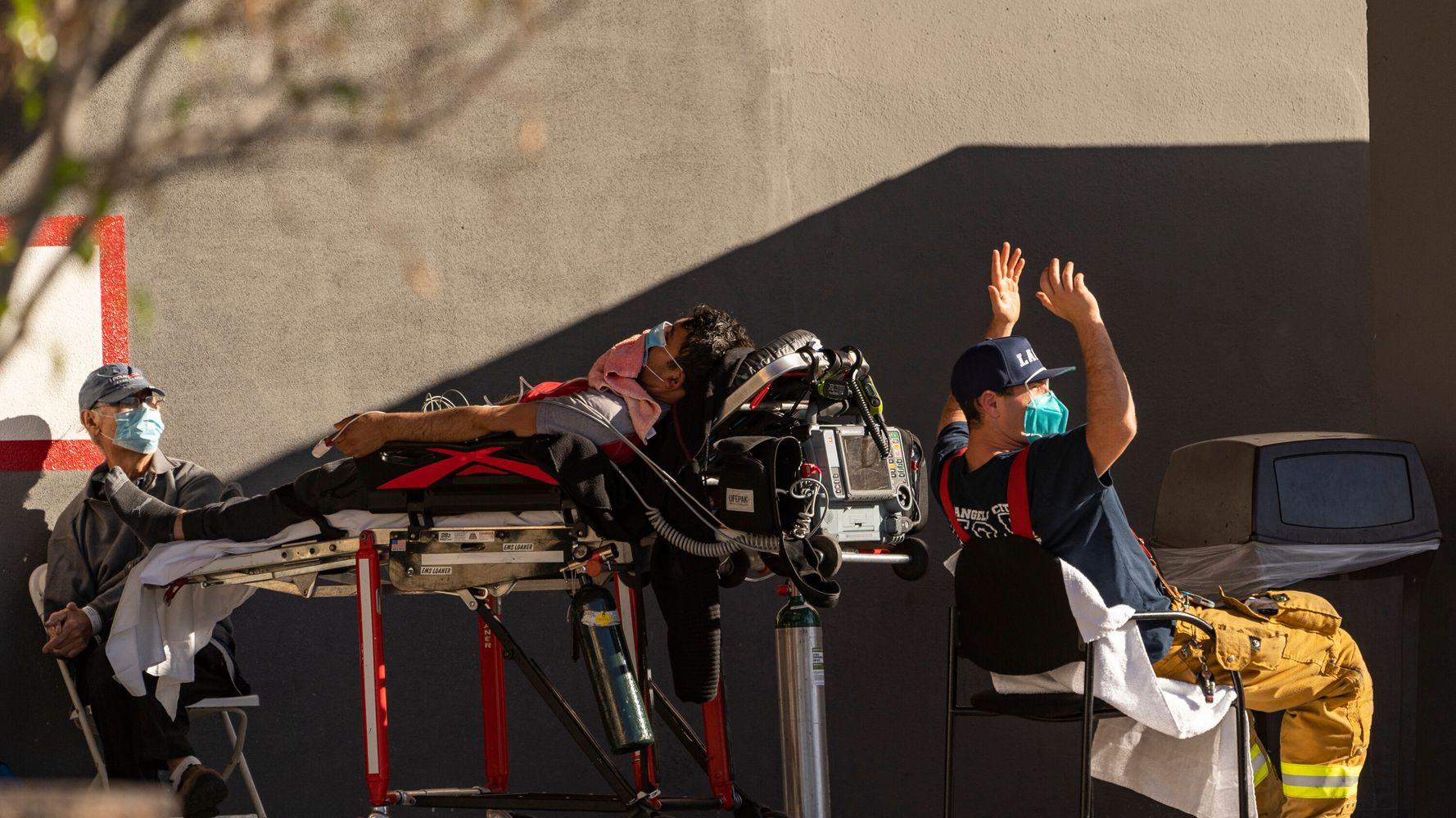 As of Friday, nearly 17,000 people were hospitalized with confirmed or suspected COVID-19 infections — more than double the previous peak reached in July — and a state model that uses current data to forecast future trends shows the number could reach an unfathomable 75,000 by mid-January.

More than 3,500 confirmed or suspected COVID-19 patients were in intensive care units.

Some areas of California are “just right at that cusp of getting overrun,” Dr. Anthony Fauci, the country’s top infectious-disease expert, said during an event organized by the California State University system.

Corona Regional Medical Center southeast of Los Angeles has converted an old emergency room to help handle nearly double the usual number of ICU patients. It’s using space in two disaster tents to triage ER patients because the emergency room is filled with patients who need to be hospitalized.

Ambulances can sit for two hours unless they are bringing in patients with critical, life-or-death emergencies.

“There’s no room at the inn, so to speak,” hospital chief executive Mark Uffer said. “Literally every nook and cranny of the hospital is being used.”

It’s a scene playing out across California. According to state data Friday, all of Southern California and the 12-county San Joaquin Valley to the north had exhausted their regular intensive care unit capacity and some hospitals have begun using “surge” space.

Lynch said he expects they will have to use the Fresno Convention Center, which can accommodate up to 250 patients, given current demand.

Fresno and three neighboring counties also have taken the unprecedented step of sending paramedics on emergency calls to evaluate people. They won’t be taken to the emergency room if they could go to an urgent care facility or wait a few days to talk to their doctors, Lynch said.

Some hospitals have canceled non-essential elective surgeries, such as hip replacements, that might require beds that may soon be needed for COVID-19 patients. Others are increasing staff hours or moving patients to free up space.

“I’m not going to sugarcoat this. We are getting crushed,” said Dr. Brad Spellberg, chief medical officer at Los Angeles County-USC Medical Center, which has more than 600 beds and is one of the largest hospitals in the county.

Spellberg said every day at his hospital for the last week has begun with no available intensive care beds and a scramble to find room in spaces that don’t usually handle critical patients, like post-surgery recovery areas.

“And it isn’t just COVID patients,” he said. “It’s car accidents and heart attacks and victims of violence. They need a place to go to receive critical care.”

The ever-increasing demand may be straining human resources as well.

“We do still have physical beds available, but we need staff to take care of patients. It doesn’t do a whole lot of good to be sitting in a bed with nobody taking care of you,” Dr. Amy Herold, chief medical officer for Queen of the Valley Medical Center in Napa, told the San Francisco Chronicle. “People are working overtime over and over again and they are exhausted and it is just getting worse.”

John Chapman, president and chief executive at San Antonio Regional Hospital in Upland, said telemetry nurses who monitor vital signs of patients should be overseeing no more than four people, but they could wind up taking on five or six because of the crush of cases.

“It definitely increases the risk of something going wrong,” he said.

Many emergency rooms already have been using outdoor tents to make more space, said Dr. Marc Futernick, an emergency room physician in Los Angeles who is on the board of the California chapter of the American College of Emergency Physicians. One hospital that has maxed out its outdoor overflow tent is expanding into a nearby gym, he said.

Yet coronavirus cases have not reached their peak in this third and most devastating wave, and that means more drastic measures are on the horizon.

Rationing of care “is right around the corner,” Futernick said. “There’s no feasible way for this to be avoided. The numbers are too big.”

As of Friday, the nation’s most populous state recorded more than 41,000 new confirmed cases and 300 deaths, both among the highest single-day totals during the pandemic. In the last week, California has reported more than a quarter-million cases and 1,500 deaths.

California has begun receiving new COVID-19 vaccines. But the available doses are too scanty and too late to have any immediate impact on the soaring infection rate.

The latest explosion of cases has been tied to people ignoring social-distancing rules during the Thanksgiving holiday. Health care officials and workers expressed frustration that many people aren’t following state-mandated safety rules designed to slow that rate.

“Whatever’s coming, I don’t think any of us are going to be able to manage it,” Uffer said. “You have a dam that’s about to break, and you’ve got to stop putting water into the dam.”

If people don’t curtail upcoming holiday travels and get-togethers, the state could see a “surge upon a surge,” Fauci said.

“I am fearful it will be worse than what we saw in New York,” Futernick said. “When New York’s hospitals became overwhelmed, health care providers poured in from around the country.”

“None of that is happening right now, and there’s no way for it to happen because every place is busy,” Futernick said. “There’s no cavalry coming.”